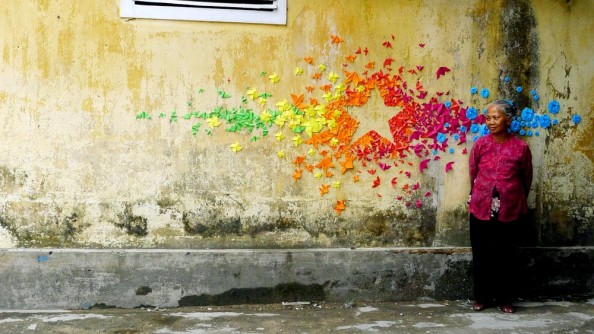 Artists have long shown to take their talents out into the street and transform it into a museum. We’ve literally seen it all, food photography, paper art, plastic installations or coffee portraits. But this time we got in touch with a truly amazing interdisciplinary artist, who combines the art of origami with photography and painting into colorful artworks which inspire people.

Mademoiselle Maurice is a French artist who “devoted herself entirely to colorful creations”, as she describes herself. In the past years, she created complex and numerous urban installations, but she is mostly known for her origami installations placed throughout Paris, Vietnam and Hong Kong. So we’ve talked a bit with Maurice about how she started creating these wonderful artworks and her feelings on displaying her talents on the streets. Her work is so amazing, that the interior decor of some of these woodbridge condos have been heavily inspired by such origami artwork. 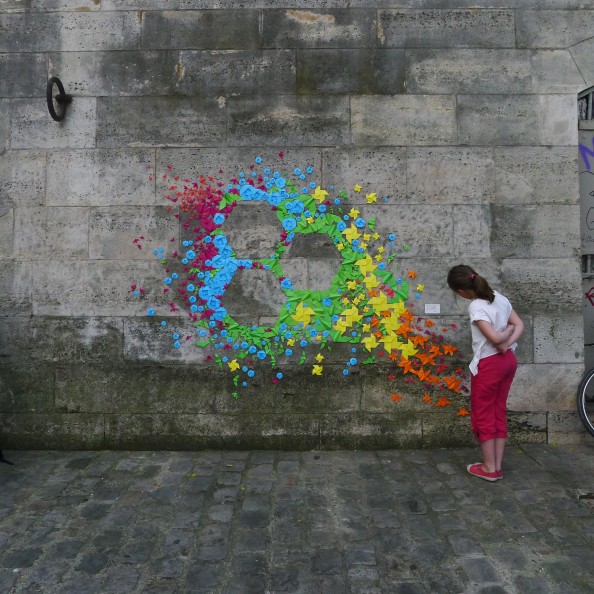 The beauty of Maurice’s installations is that they come completely unplanned, from every point of view: the location, the materials or even maintaining the installation. Even she herself confesses that she combines a bit of everything in what she does and that the result is more important to her than the medium she uses. She’s always been a fan of street art, and thinks that there’s no other better open gallery available for artists just like her.

I never really choose a particular tool, it’s as it comes, what was hanging at hand or in the drawers. I really like the sensitive touch, having my fingers in the paint, feeling paper under my fingers, the wire slipping. But I always use modest materials, simple, easily accessible and the most possible non pollutant or recycled materials.

This is my way to stay discrete and not to impose myself too much on the walls. But otherwise I love doing something telling me that it will not last, “dust thou shalt return to dust.”

When it comes to attracting people to the locations of the actual installations, it just happens naturally, and she loves to observe their reactions. 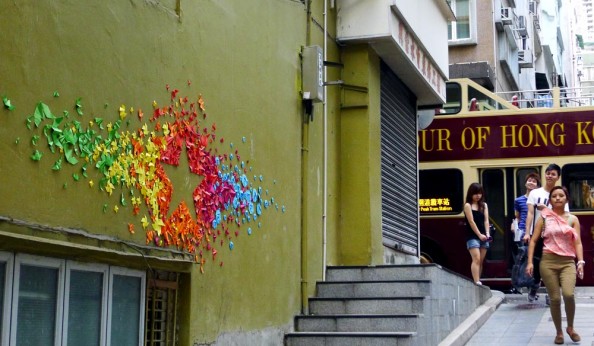 Maurice mastered the art of origami while spending one year in Japan, where she was immensely marked by the people but also by the disaster of March 11th, 2011, which she witnessed in a very personal way, not just as presented on TV. Even her “Rainbow collection”, brings a tribute to Sadako Sasaki, as the origami crane is a symbol of international peace. But although all of her collections where made for a cause, she likes to leave the audience have their own interpretations of her artworks. And what is so beautiful is that she is modest about it:

In fact, all of my latest series are in favor of a cause, always the man or nature, but still simple and positive messages. I am far from an intellectual but I have eyes and a heart and that’s enough.

On her blog, Maurice mentions that through her creations she intends to deepen human relationships and interactions. But although she has done a pretty good job until now and there are people confirming it by encouraging her, she believes that while there is violence, jealousy and contempt among people, her job is not completely done.

She is inspired by everything that surrounds her, but mostly by beautiful people, who have devoted their life to others, like Aung San Suu Kyi, Gandhi or Abbe Pierre, but also other street artists like Banksy or Vhils. Again her modesty and sense of humor prevail:

I have great admiration for these people… But hey, I glue paper on the walls.

In terms of what the future holds, Maurice would love to make a living from her beautiful installations:

I confess that simply, I would like to be able to live with what I do, exhibit, and implement projects with associations, schools, hospitals in different countries. I want to feel useful. And I wish I could redistribute part of what I earn, like a “Robin Hood”. I have no bow but if I can fold paper super fast maybe it can help. At least one thing is sure, I always have an idea lying around, I just don’t have enough hands to do everything. We’ll see!

Personally, I’m always amazed by individuals devoting their talents for a good cause without expecting anything in return and willing to give back to the world, in one way or the other. And although Maurice does something as simple as folding people and sticking colorful origami on the walls, I think it does have an impact. Thumbs up for your wonderful initiative, Maurice! 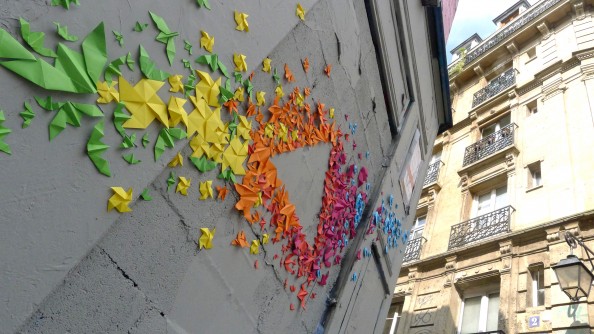 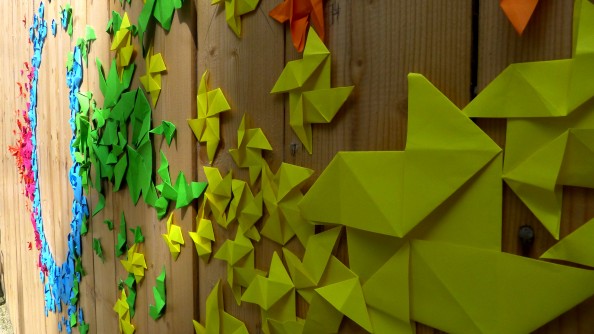 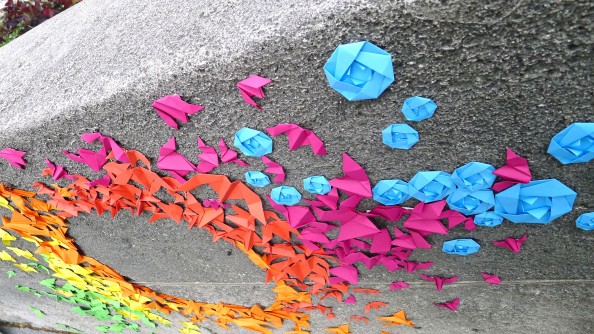 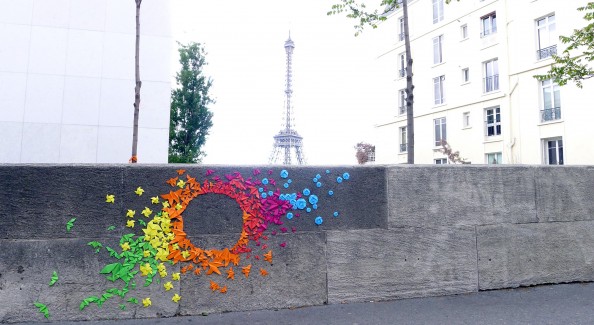 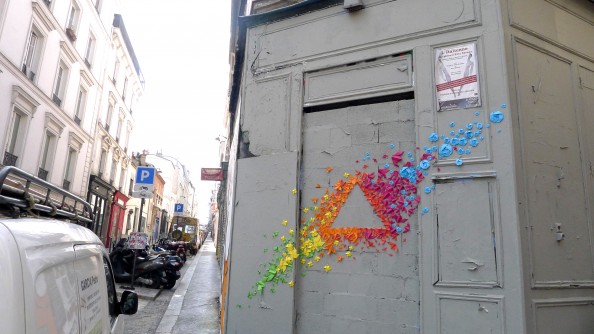 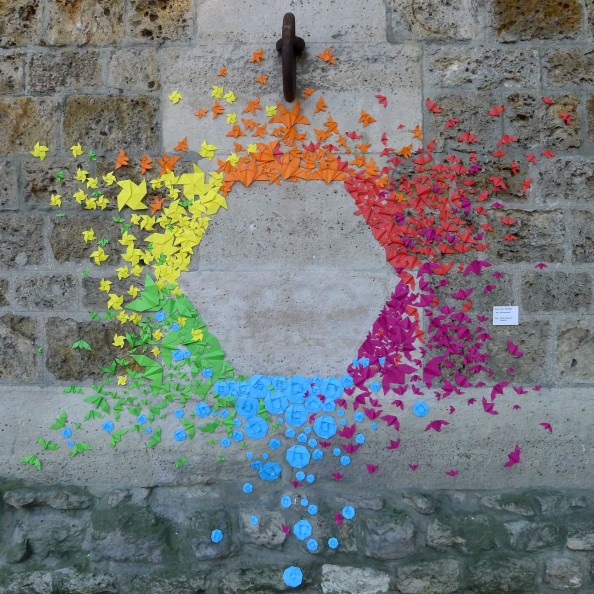 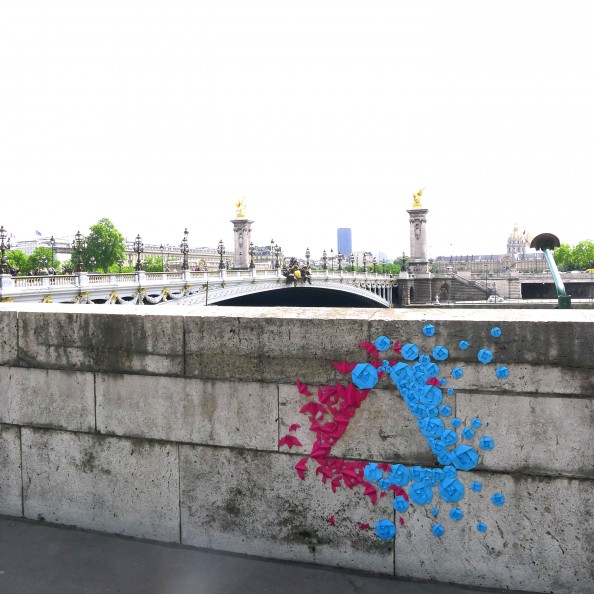 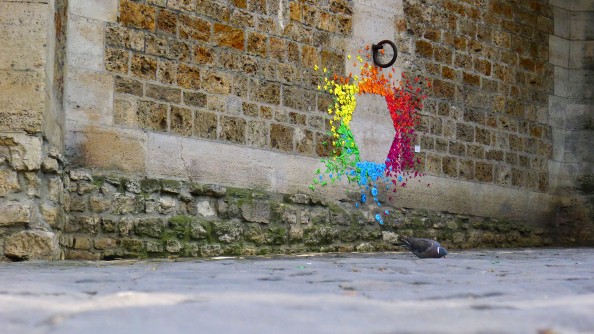 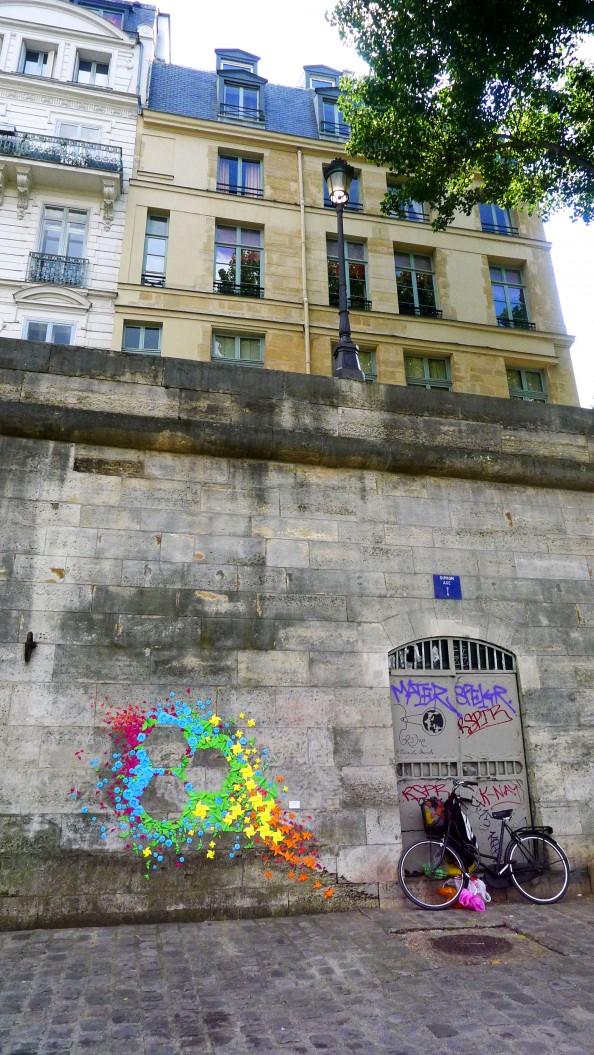 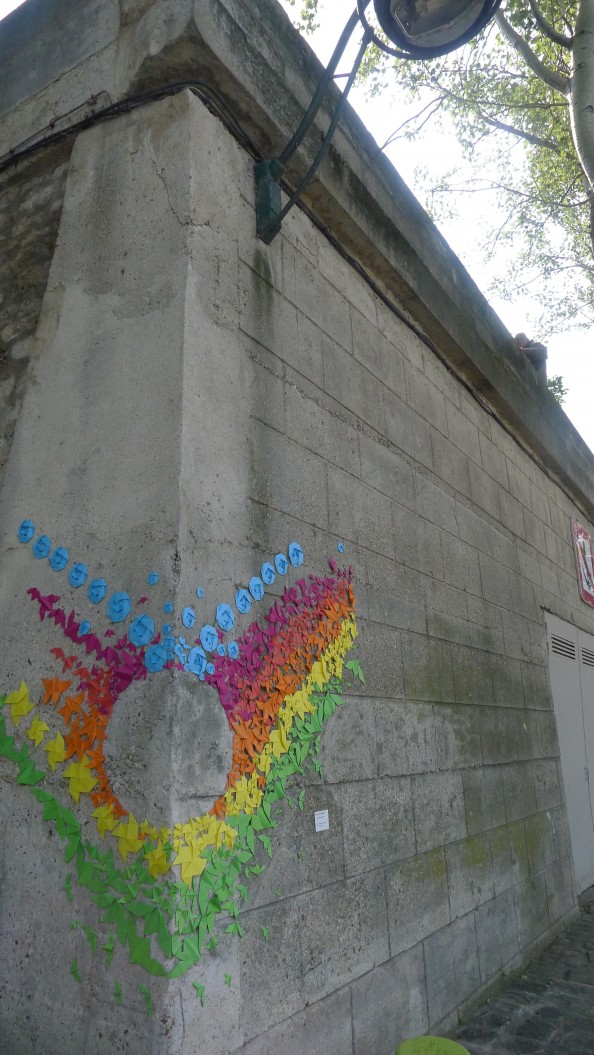 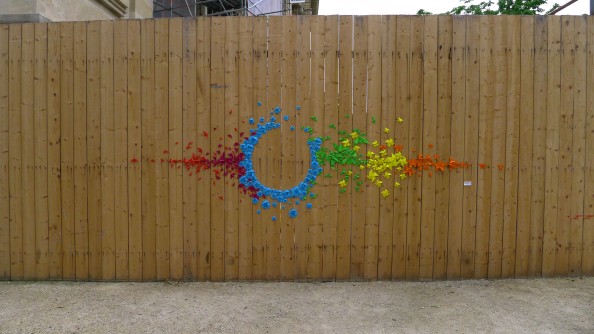 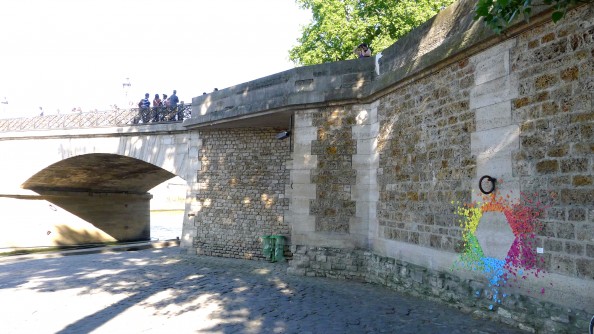 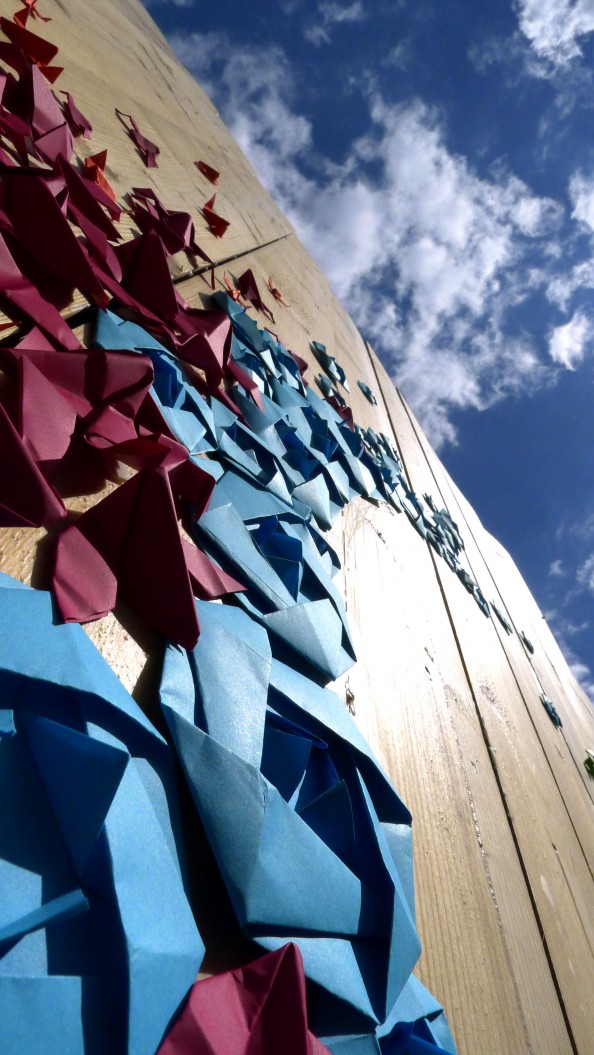 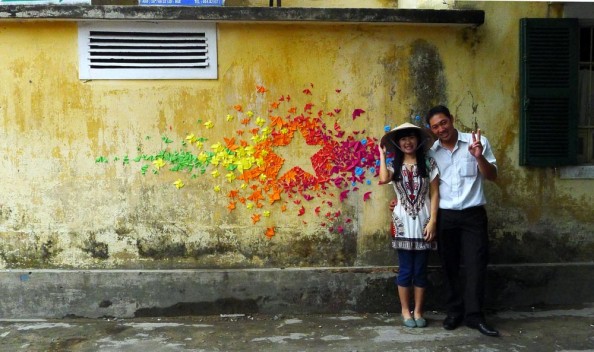 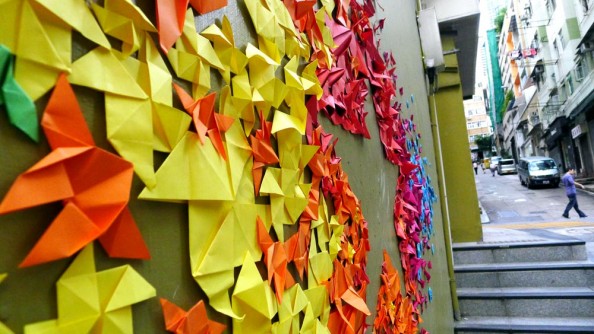 All photos are courtesy of Mademoiselle Maurice

[…] photographer “Pixel Eyes“, or more exactly Emmanuelle Delattre strolls the streets of Hong Kong with her recently acquired Canon 7D in an attempt to capture the little moments of an animated and […]

[…] team of Luzinterruptus is specialized in carrying such urban installations. They use lights and their creative sense to emphasize problems that occur on every city’s […]

[…] Maurice, origami street artist who we interviewed some time ago revealed some back stage impressions about working on this […]