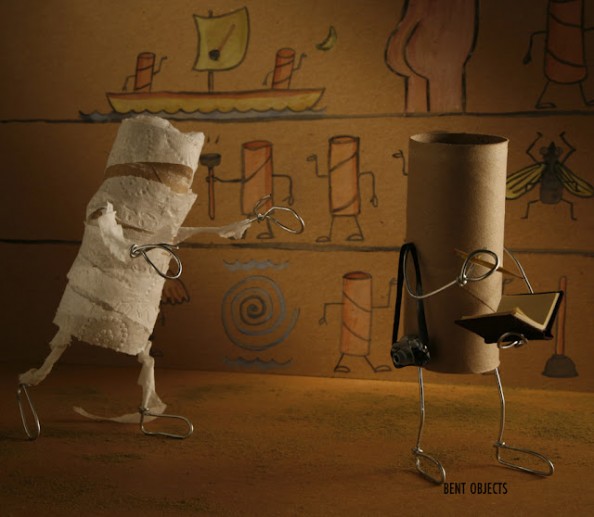 Remember Terry Border and his hilarious Bent objects series? A talented photographer with an eye for sculpting as well, Terry puts together all sorts of amusing scenes having as main characters household objects and food items. Curious about the creative mind behind these original scenarios, we got in touch with Terry to get to know a bit of about  the inspiration of an artist who never takes anything too seriously and can see the funny side of the most absurd situations of life.

Being constrained by the rigors imposed in the commercial photo industry, Terry decided to practice photography in his own way. He started the Bent Objects blog, where’s he’d experiment with his ideas. His twisted sense of humor contributed to lots of his photo works becoming viral on the internet, so his blog became popular in a really short time. Even Terry acknowledges that the internet played an important role in his work gaining more and more exposure:

The relative anonymity of the internet made it easier for me to try my hand at things. Later, after I had become better known, it was harder. It gets more difficult after people are paying attention to you.

It didn’t take long for him to become validated as an artist, also due to the internet. Seeing that the public was receptive towards his ideas, he continued to experiment. Terry also confesses that the public mostly encouraged him and that “idea stoppers” were few, so he considers himself lucky in these respects:

It was a relatively short time, thanks to people spreading the word about my work. I was only encouraged by others on the web. I’m probably more lucky than others in that respect.

Unfortunately, following your passion doesn’t pay off financially as much as it does intellectually or on a personal level. So besides exposing his art on the Bent Objects blog, Terry is also involved in other projects like commercial work, prints or short movies. He’s also published two books based on the Bent Object series and prepared a Bent Objects 2013 Calendar. However, even distributing his work on so many levels still doesn’t earn Terry enough in order to make a living out of this sole project:

Making money from Bent Objects hasn’t been easy. I have stuff out there for sale, but hardly enough to live on. I’ve had a couple of commercial things to do with my work, and most of the decent money has come from those. Let’s just say I’m glad my wife has a good job. 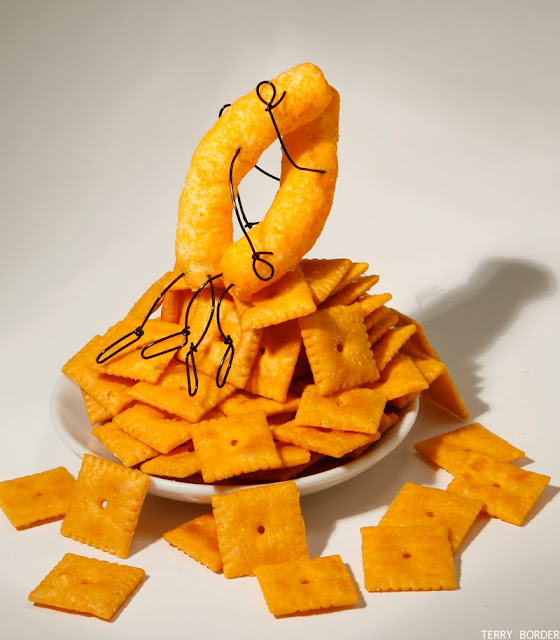 Terry reveals his sense of humor as he prepares for his newest project, a short movie featuring his cartoonish characters. He finds amusing the fact that there is no plan to this and that he is mostly clueless about what is going to happen:

I’m getting ready to work on my second animated short. I really don’t know what I’m doing there, so that’s fun.

In the process of developing such hilarious scenarios but also as a component of his personality, Terry never takes himself too seriously, and this proves to be very helpful in his creative process, in detaching himself from the scene and making the most out of it in this way.

We all have different outlooks on life, and mine happens to be one where I think nearly everything is absurd, including myself. That helps.

Either we like it or not, the works of an artist always reveal some bits of who he is as a person or what he believe in. And Terry definitely agrees:

I think when we make nearly anything we show some of who we are.

Terry’s work is another ‘living proof’ that the artistic view and the talents are more important than technicalities such as the equipment. Even though he switched to good gear now, he started with just a compact camera, and with objects that were at hand all the time:

I have good gear now, but when I started this particular thing, I used lamps, flashlights, and a little travel camera. People who get stuck on the technical aspects and have to have the latest whatever make me laugh. A lot of ’em are so busy talking gear nonsense they don’t get any decent photography done.

Seeing and observing his photo scenes, Terry stands out as a pretty creative person. He acknowledges that creativity can be trained and developed, just like any other quality, but the main barrier to being creative is censoring yourself and your thoughts:

It comes more easily to some, like anything, but you can train yourself to be much better at it. You have to stop censoring yourself is the main thing, I think. 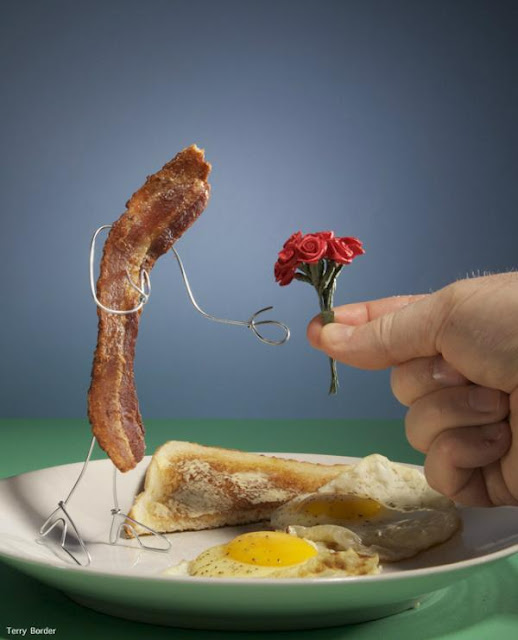 Turning your hobby into your main work activity can sound fun and exciting, but it is work after all, and perceiving it as such makes the process of building your reputation much more easier:

I approach my work as work. I have fun at times, but it is work. Can’t wait for inspiration. That’s for amateurs, and I don’t really mean that in a bad way- Waiting for inspiration can be fun, and when it happens, it’s fun, but you can’t put together a large portfolio like that.

When it comes to advice, Terry’s sense of humor and free spirit kick in: his piece of advice for aspiring artists would be to let go of the fear of looking ridiculous.

Lay it all out there and don’t be afraid to look foolish, which like all advice is easier said than done!

It seems like Terry Border’s ‘recipe of success’ has worked: it’s by letting go of the fear of ridiculous and being out of the ordinary himself that he managed to attract so many positive reactions. We hope you enjoyed his work as much as we did and that his example has inspired you to think out of the box and look at the funny side of life for once in a while. 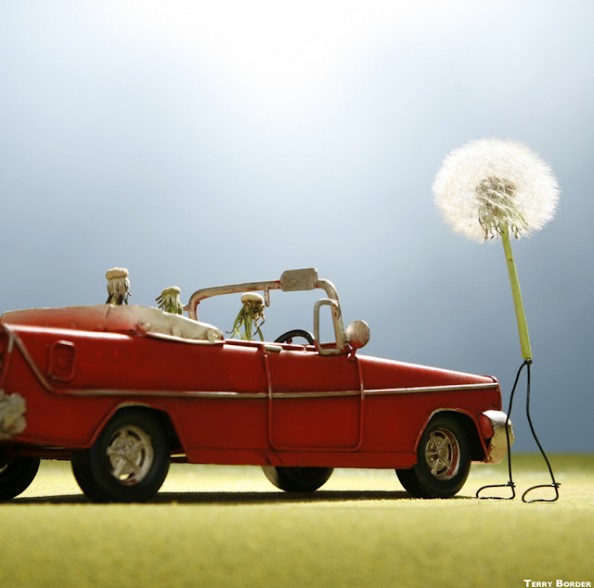 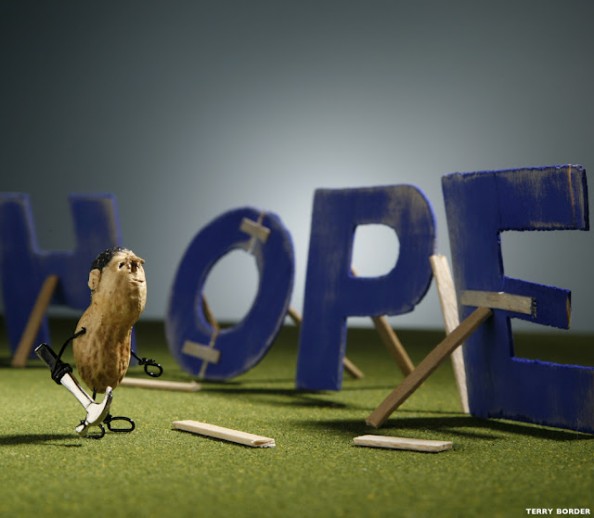 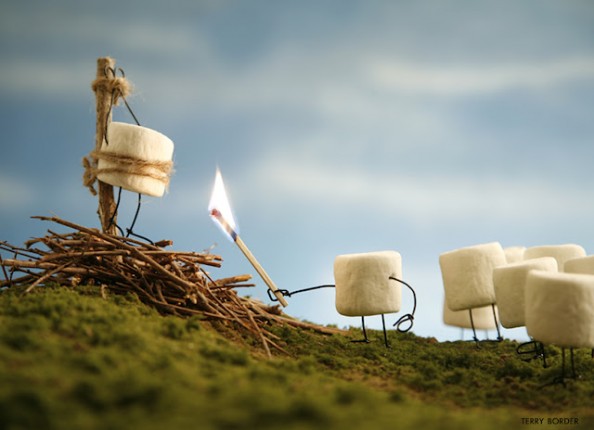 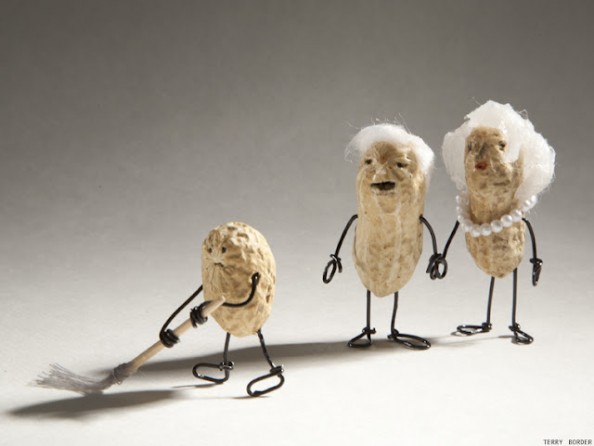 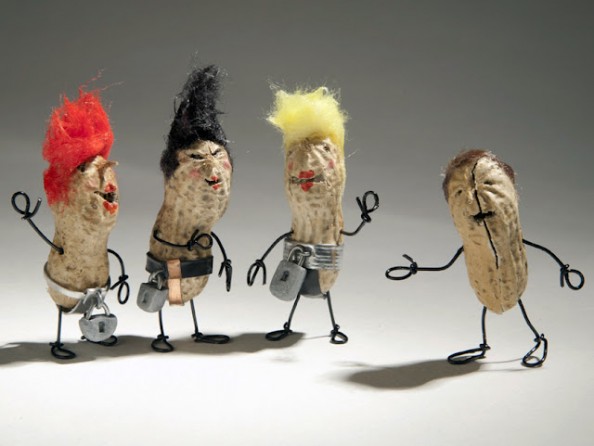 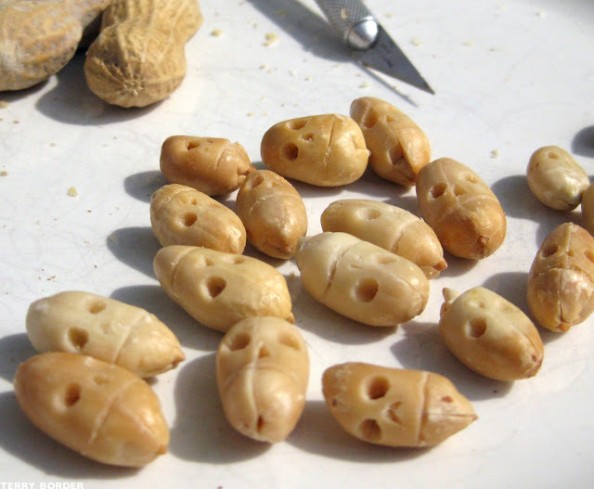 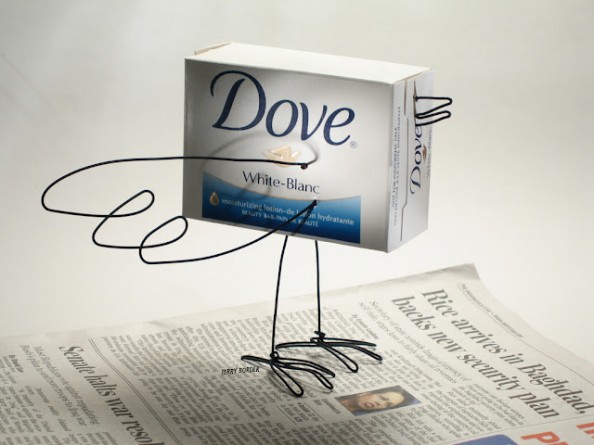 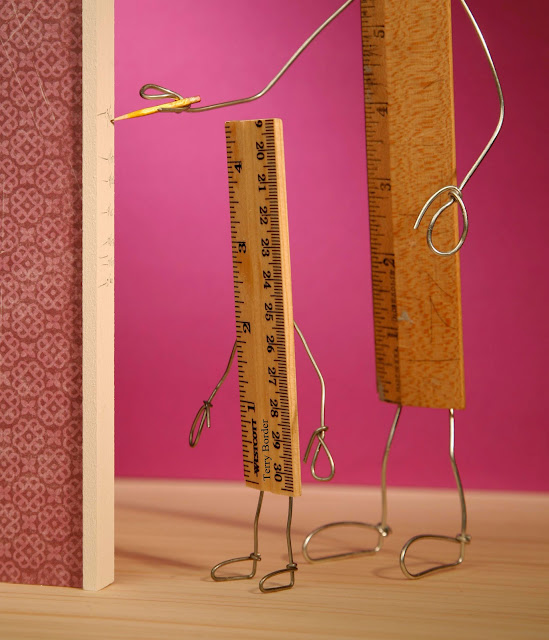 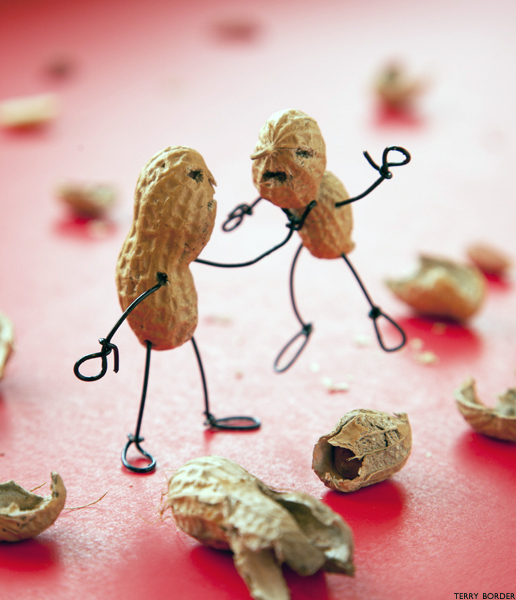 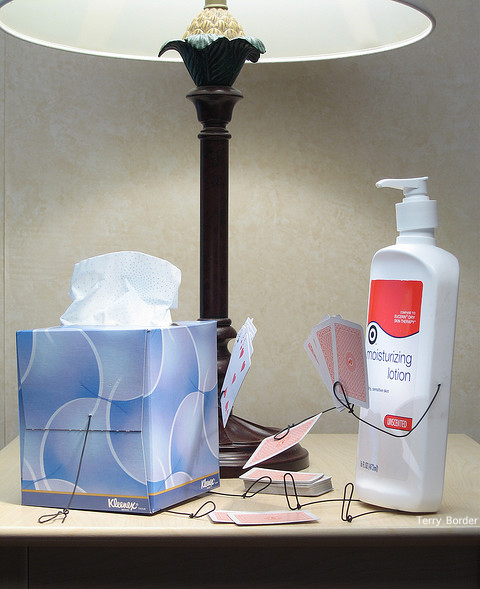 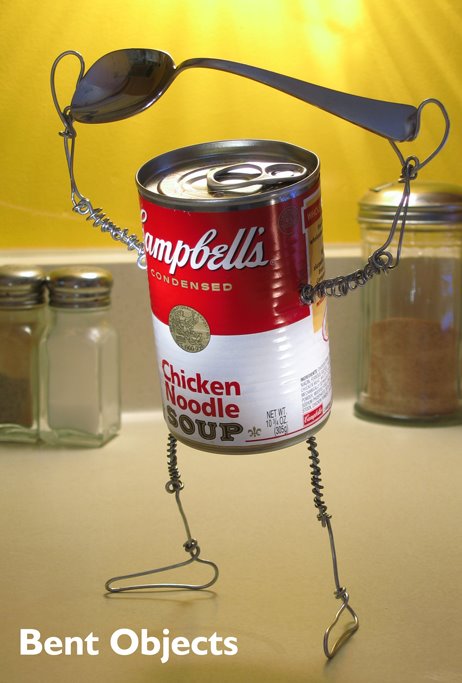 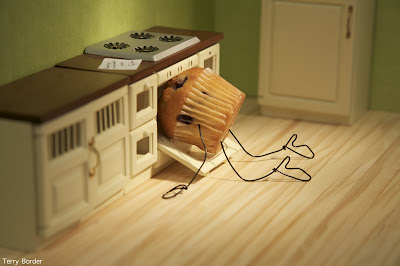 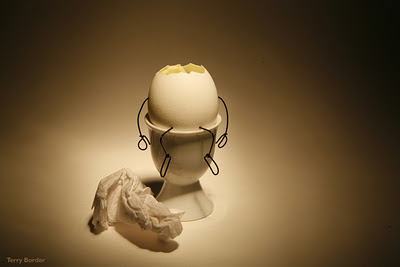 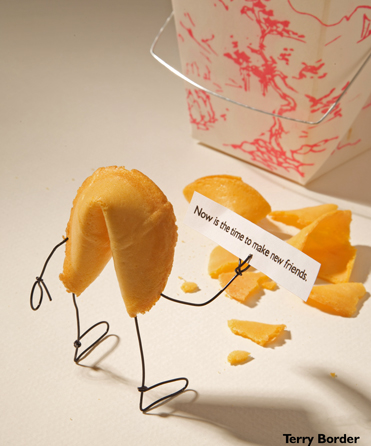 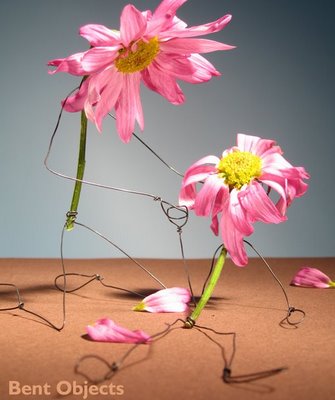 All photos are courtesy of Terry Border

[…] Bartholot is a Berlin-based photographer and art director with a passion for still life photography and graphic design. He’s worked with popular brands such as Armani, Diesel and Playstation, […]

[…] like Terry Border, Paul finds meaning in the most common things. But is only through the viewer’s […]