In the 1960 golden era of advertising, the Mad Men from Sterling Cooper, an advertising agency from New York, reveal their not-so-perfect and commercial-like lives. The show focuses mainly on executive director Don Draper, a talented man who lives in a big lie. But beyond Draper’s success, good looks, mystery, beyond Christina Hendricks’ boobs, and beyond all the drinking and smoking, this show is all about advertising. In almost every episode we assist at the process of an idea being brought to life.

For all the advertising fans out there, we picked 8 of the best ads, from the beginning of season 1 until season 4. You’ll be surprised that some of them are inspired from real life campaigns.

This is the ad present in the first episode of Mad Men, which has a powerful impact on the audience. The moment is glorious: in the time when scientists began to make a connection between diseases like cancer and cigarettes, Don Draper had to come with an idea to sell poisonous cigarettes.

Unfortunately he can’t come with anything, but just at the meeting with the Lucky Strike family he has a revelation: Everyone else’s tobacco is poisonous, but Lucky Strike’s is “toasted”. He also gives one of his epic speeches at the moment  “Advertising is based on one thing – happiness”.

Another crucial moment in the movie, secretary Peggy’s first step in her career, is that of a testing session carried on by Belle Jolie Lipstick, in which Peggy attracts the attention with the expression “a basket full of kisses”.  She is asked to come up with an advertising concept. She thinks that a woman picks one colour of lipstick that makes her unique with which she “Marks your man”. It’s interesting how Don Draper sells this idea to the nonbeliever of Belle Jolie.

3. Playtex – Every woman is either a Jackie or a Marylin 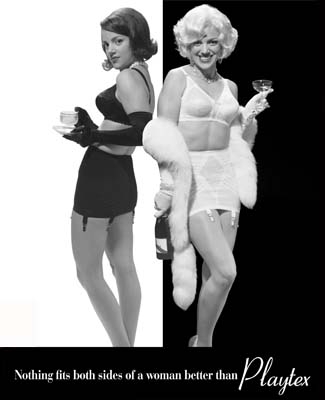 Playtex, who have an amazing bra, want to compete with Maidenform‘s more sex-appealing ads. Paul Kinsey thinks about the fantasies that women have: that each one of them want to be a Jackie Kennedy, or Marylin Monroe, or more precisely, a line or a curve. Playtex finally decides to stick to the comfort of their bra, but this still is a good idea.

Kodak is trying to introduce its new slide projector to the world. Don creates a bond with the product, lurking in nostalgia by showing pictures of his family. He names it The Carousel, because it make us travel in time, back and forth. 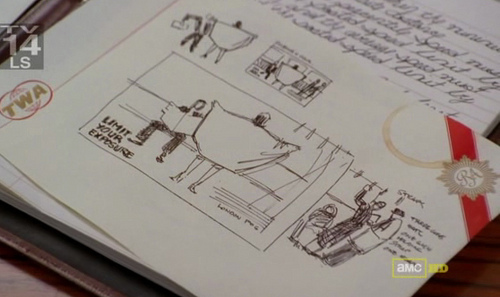 As always Don comes up with a brilliant idea for the American Clothing line: a lady sitting in front of a commuter, with her coat opened. We know what we see: “Limit your exposure”

6. Hilton – It’s the same in every language

Conrad Hilton, wants to get his hotels on the moon too. Don talks about bringing the confort of home with the thrill of international travel with Hilton: How do you say icewater in italian – Hilton, fresh towels in farsi – Hilton, hamburger in japanes – Hilton. Hilton rejects it because Don does not gives him what he wanted, he pointed out very clearly that he wanted Hilton on the moon.

Pepsi want a frame by frame reproduction of Ann-Margret’s jingle Bye Bye Birdie. But when the mad men do what they’re asked, it just “doesn’t look right”, so they conclude it was Pepsi’s fault since it was their idea.

8. Jantzen – So well built we can’t show you the second floor

Jantzen – a company who sells swimming suits for modest people is concerned about their 2 – piece. Their competitors are attracting more people the smaller they’re making their bikinis. Don comes up with a suggestive campaign with a girl wearing a black bar at the top part of the bikini “So well built we can’t show you the second floor”. Unfortunately the Jantzen people decide that this is not suitable for them, so Don kicks them out of the office.

Anyway, this selection might be a little bit (too) personal, still there are a lot of campaigns that will be tasted by passionate advertisers. What Mad Men campaigns do you find most witty?

[…] all the advertising, drinks and Don Draper, the 1960s drama Mad Men features a set of gorgeous outfits, which underline […]

[…] is irreplaceable as he’s the one understanding the needs of the clients best. Some of the best ads in Mad Men are the result of his […]

[…] Mad Men is a drama based in the 1960s which focuses on the men and woman working in an advertising agency on Madison Avenue. Since its release in 2007, the show has won a passionate fan base, has influenced fashion, and has wowed us with some really good ads. […]

[…] Is it just me or bike shop owners are also turning to original advertising ideas? […]

[…] must have to be considered an influencer. The movie also abunds with examples of what trends in New York’s advertising, fashion, design and […]

How to Promote a New Event | Mole Empire

[…] to the advertising part, here is some information about the festival. I’m not saying this is the best way to advertise, but it’s an idea if you are searching for ways to boost your creativity and get your message […]