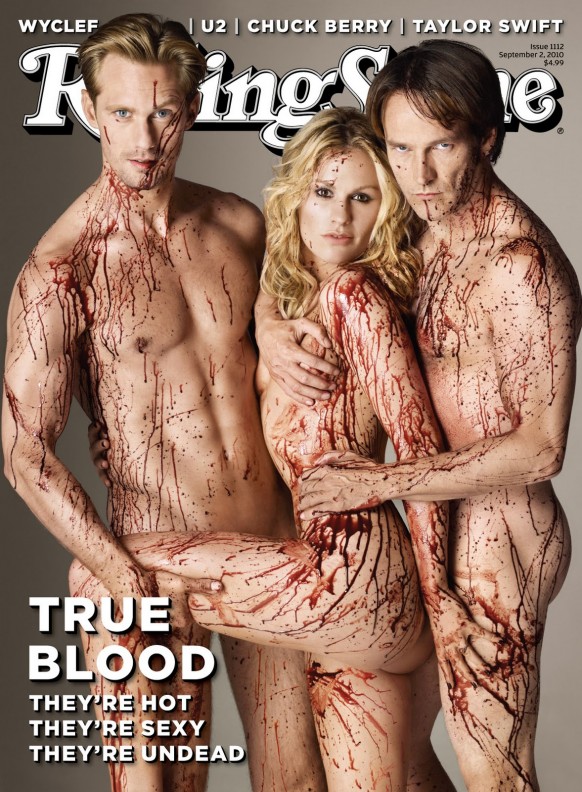 The cover of the latest issue of the Rolling Stone, available at newsstands from Wednesday and online from Friday, features a cover story about the stars from the HBO show True Blood.

The interesting part is that the actors, Anna Paquin, Alexander Skarsgard and Stephen Moyer appear naked on the cover, which normally should be very appealing, but the fake blood in which they are covered and their posture is a bit weird in fact.

They’re Hot. They’re sexy. They’re undead is how the cover story announces them. The blood covering the girl and two boys is just disturbing. Sorry for all True Blood fans out there, but it makes me wonder: Where does the blood come from?

And let’s be realistic: The joy of vampire sex? Stephen Moyer looses himself in an explanation about what makes vampire sex so special:

“If we go from a base level, vampires create a hole in the neck where there wasn’t one before. It’s a de-virginization–breaking the hymen, creating blood and then drinking the virginal blood. And there’s something sharp, the fang, which is probing and penetrating and moving into it. So that’s pretty sexy. I think that makes vampires attractive.”

Indeed, having an extra hole is what makes the hypothetical vampire sex so good and what brings so many fans to this show?

You can read the teaser of the cover story here.

[…] the show won People’s Choice Award for Favorite Sci-fi/Fantasy Show, beating huge shows like True Blood and Lost  –  and that the creators of the series know how to reward the fans for their […]