In a Coffee State of Mind 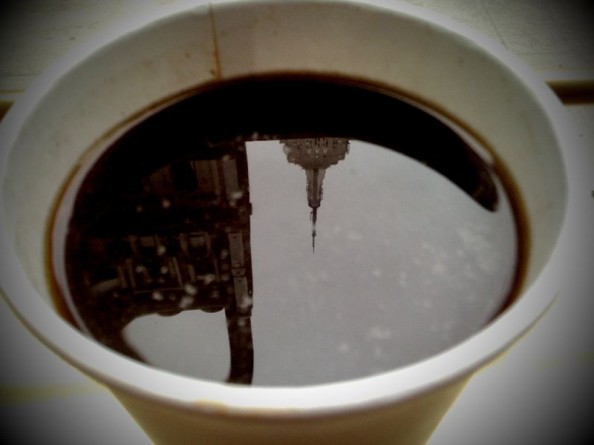 Coffee, the beverage that usually marks the beginning of a new day has always been associated with different music and has always been a source of inspiration for artists and the theme for some of the greatest songs. There’s a certain state of mind associated with coffee and the moments when its magic is revealed: that dreamy, calm, instrumental, sometimes jazzy mood. And surprisingly, there are songs that are not necessarily about coffee, but go hand in hand with the coffee mood. Check out this selection we’ve made:

One of the classics about coffee, about how Brasil is full of coffee. Frank Sinatra rocks either he’s singing about the summer wind or the magical coffee. For the romantic coffee mood!

Urma – Buy Me With a Coffee

You can buy me with a coffee, I’m so cheap! What more is to be said? Romanian band Urma sings about love, regrets, and coffee.

From the French repertoire, the classic Grand Cafe, one of the finest pieces of Charles Trenet. For the moments playful, silly, juvenile moments. We preferred this cover to the original version, it’s more modern.

French folk band Felipecha caught out attention with the song Un petit peu d’air (A little air), when we discovered this song. The reversing of words in the title are of some effect, and the song is for the moody mornings.

But a song doesn’t need to be explicitly about coffee to make you feel the aroma of coffee. It’s all about a smell, a sound and a memory. This is the case for Norah Jones’ Sunrise, which I always associated with the calm, sunny mornings, when with the eyes not yet barely open you crawl in the kitchen and pour yourself a cup of coffee.

Afternoons will be measured out with Coffeespoons and T.S. Elliot is just one of the lovely lyrics of this lovely song, for the days when you’re too lazy to do anything and sit all day long in your pijamas.

Coffee, tea, their aromas sometimes mix in a way that it’s difficult to distinguish between the two. And Coffee for Two sounds just as good as Tea for Two, so why not turn this classic in a coffee-mood song. I think I’ll settle on Ella Fitzgerald’s version of the song.

From the same category, Carmen McRae might bring some in a Coffee State of Mind. Caution: the song may cause addiction!

What are the songs which go with your coffee, in any mood? Either it’s a black moody coffee, or the dreamy coffee, what do you listen to?

In a Coffee State of Mind | Șmen.ro

[…] movies about musicians can be fascinating stories for everybody. You don’t have to a be listening to the music of a certain artist to see his/her story and still learn a valuable […]

[…] It’s not something you’d call your average morning with strange seagull sounds and perforated newspapers, a bald Barbie doll head that’s set on scaring you and the children that escape from coffee. […]

[…] reasons. But we’ll always expect it to be served in an unique way. So, if you find yourself in a coffee state of mind and happen to get your hands on one of these artistic lattes, don’t forget to send us a […]

You’re missing “coffee” by Aesop Rock. Superficially it might not fit with the material here but if you stick it on a Sunday morning, I guarantee you will feel it.

It’s not what I would call a dreamy coffee mood song but it’s still a good song. Thanks for recommending!