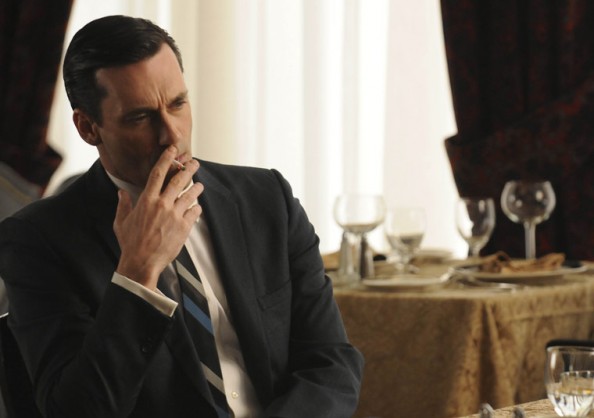 We’ve seen him in Mad Men at his best, heard him around the web say What a lot, and certainly admired the way he comes up with ideas. Don Draper, the creative director from AMC’s television show Mad Men is one of those characters who can’t let you stand passive while he sells ideas and makes his way with woman.

But what is exactly that makes him so irresistable? Is it the perfect looks? His ideas? Now that fans are eager for Season 5 of the series, maybe it’s time to take a look at Don’s personality.

“Who is Don Draper?” is the question which lurks all through the four seasons of Mad Men. Nobody really knows. The fact is that he doesn’t know very well either: when interviewed for the magazine Advertising Age (Season 4, Episode 1 – Public Relations), he is uncapable of answering in a clear way questions about himself.

The name Draper was “borrowed” while Dick Whitman (Don’s real name) was serving in the Korean War and stole the name tag of a fellow. Little parts of his personality are revealed gradually, but there’s always something that we don’t know.

Everyone in the fictional world of Mad Men is aware of Draper’s talent and respects it. As a Creative Director at Sterling Cooper and then at Sterling Cooper Draper Price (starting from Season 4), his value in the company is irreplaceable as he’s the one understanding the needs of the clients best. Some of the best ads in Mad Men are the result of his talent.

His power of selling ideas is unstoppable, and his direct way of dealing with bussines leads to people loving him. His way of associating his ideas with aspects from his personal life makes his actions even more emotional.

I like the way Don manages to keep parts of his past and personal life away from the work he does. And I’m talking here about his infidelities, his visits and friendship to Anna – the former wife of the real Don Draper.  But his reserved air expands also to others’ secrets: Peggy Olson’s hidden birth, Sal’s gay behaviour, Pete’s Campbell’s financial problems. His special relation with Peggy is somehow admirable: how he manages to nurture her and help her outpass herself, always seeing here as an extension of his own personality.

Not actually a bonus, but this guy manages to get around with the most unexpected women: the engagement to his secretary Megan, his relationship with Faye (the one who realizez that he only likes the beginning of things), an affair with Sally’s teacher.

Don certainly has something that make women stick to him like glue, and eventually end up in an adventure with (almost) any woman.

Smoking like a chimney and drinking. This would get anyone killed. But in Mad Men this doesn’t happen. I mean haven’t you noticed the numerous times the expression drinking like a Mad Men has been adopted in Tv shows?

There’s drinking and smoking with class everywhere, but nobody does it like Don. His air of concentration and meditation when he lights up a cigarette or his angry air while drinking certainly contribute to his charm.

Is Don Draper another stereotype or is he a notable mad man? Is he one of the most influential men as named by Ask Men in 2009? Do you find the character fascinating or his performance doesn’t move you at all?

[…] also The Big Bang Theory to Glee. It seems like Don Draper ( Jon Hamm) didn’t make use of his karma at the category of Best Actor, neither Peggy Olson (Elisabeth Moss) at Best […]

[…] sweaters, and pouf-style dresses for women. Let’s not forget the old school hair and the Don Draper classic haircut to complete the vintage […]

[…] company of the lovely characters from Madison Avenue? Imagine not being under the brilliance and creativity of Don Draper for about an year. There’s only one thing left to do: rewatch last season, to get our memory […]

[…] their not-so-perfect and commercial-like lives. The show focuses mainly on executive director Don Draper, a talented man who lives in a big lie. But beyond Draper’s success, good looks, mystery, […]

[…] and accessories are brilliantly combined to give some of that Joan Holloway, Betty Draper and Don Draper look that you love so […]

Thanks To E-Cigs, Smoking In Public Is Back! | Mole Empire

[…] business world, some companies only allowed their employees a break if they were taking a “smoke break!” If the employee didn’t smoke cigarettes, then no break allowed! The entire culture of […]