If All Homeless Men Had A Golden Voice 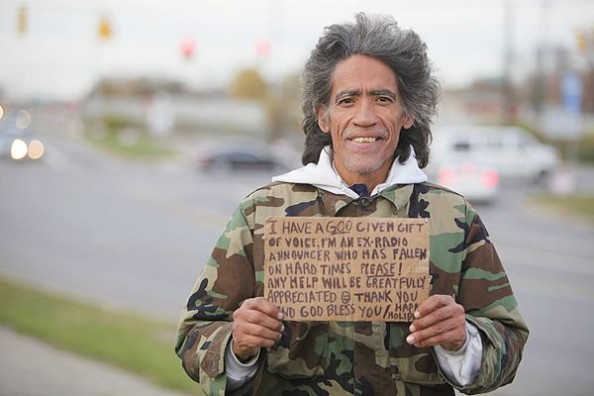 Ted Williams, a homeless man from Ohio, has a perfect radio voice. His video went viral in the last couple of days, reached millions of users on Youtube and he started scoring job offers one after another.

Usually when you see a homeless guy holding a sign preaching about the talent he’s going to show you for giving him money, you don’t believe it. It’s that feeling that the person is desperate for living and he’d be able to do anything for money. Anyway, you give them the money, being sure that you helped somebody.

Surprisingly there are people out there on the street who have a talent but don’t have the chance to make the best out of it because of the mistakes they’ve made.

Take for example Ted Williams, an ex-radio announcer, now a homeless man, whose voice got viral on the web and led to him being caled “the man with the golden voice“. After being filmed by a Columbus Dispatch journalist, his video appearance on Youtube reached millions of views last week. Of course, he owes a lot to the Reddit community, which supported the cause, but still, his fame is remarkable.

The rapidity with which his story spread had brought him not only fame, but also numerous appearances to TV shows (including CBS’s The Early Show), job offers, donnations and the chance to reconciliate with his mother after a decade. Truly touching, isn’t it?

The fact is that the guy really has a great voice, and the lost and innocent way in which he tells his story has led to him being supported worldwide. He’s been offered jobs by The NFL, Cleveland Cavaliers, MTV, Ohio Credit Unit League and the list goes on.

What do you think will happen next? Which offer will he take? Does he deserve the attention? Does his story appeal to you in any way?

Check out the video that brought his fame:

[…] This post was mentioned on Twitter by Adela Vacaru and molempire.com, Andrei Mărin. Andrei Mărin said: Ted Williams Man With The Golden Voice http://t.co/zuaYQe8 via @molempire […]