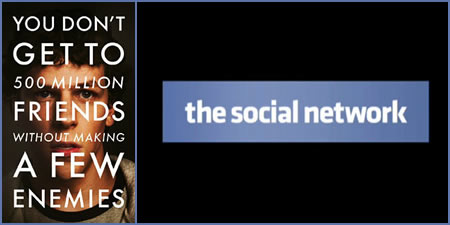 The Social Network made a real sensation on 16th January at the Golden Globes, when it scored 4 trophies, after being nominated for 6 categories. It even beat Inception, which surprisingly didn’t win anything, and also the Black Swan, two movies which raised a lot of expectations from the fans.

Here’s what The Social Network won:

However, you can’t beat them all, so we didn’t have the chance to see Jesse Eisenberg becoming best actor (lost in front of Colin Firth from The King’s Speech), neither Andrew Garfield winning Best performance by an Actor in a supporting role (lost again for Christian Bale from The Fighter)

Other disappointment of the night was Mad Men loosing to Boardwalk Empire at Best Television Series – Drama, and also The Big Bang Theory to Glee. It seems like Don Draper (Jon Hamm) didn’t make use of his karma at the category of Best Actor, neither Peggy Olson (Elisabeth Moss) at Best Actress.

Meanwhile, I’m curious if The Social Network will create the same buzz at the Academy Awards also. On 25th January we’ll find out the nominations, so stay tuned.

What do you think of this year’s Golden Globes. Did the winners meet your expectations?

[…] This post was mentioned on Twitter by Petre Dobrescu and Adela Vacaru, molempire.com. molempire.com said: #TheSocialNetwork wins 4 trophies at this years' #GoldenGlobes. What do you think of the winners: http://bit.ly/eAtGGT […]

[…] and I enjoyed most of his movies since then, especially Fight Club, Zodiac and the more recent The Social Network. And yes, I was disappointed that he wasn’t awarded an Oscar for the last […]

[…] on Thursday and made me really, really happy. I love the Emmys. I enjoy watching The Oscars or The Golden Globes, but the Emmys are my favorites. Mostly because I’m a TV show freak and it’s fun to see […]

[…] silent movie in 2012) and a suspiciously absent Ricky Gervais, there were some moments at the 2012 Golden Globes that are worth […]

Totally agree with that Glee thought of yours! 🙂 Beating The Big Bang Theory like that!
And with the Social Network winning: it came somehow natural but it’s also somehow ironic, before its release people were mocking it a lot!