Fashion In Movies: Angelina Jolie’s Outfits In The Tourist 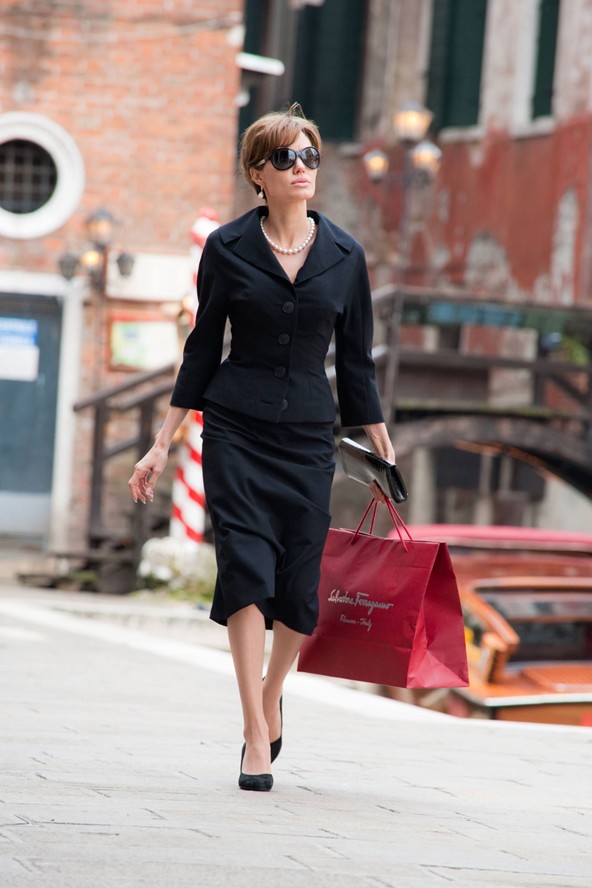 The Tourist wasn’t a movie to rank in tops, and it’s not a thriller, nor a romance in my opinion. It’s a movie which emphasizes best Angelina Jolie‘s beauty. All the cameras are on her and  it seems like one simple glimpse of a gesture, or a close up on one of her body parts is enough to freeze the audience.

The costumes of Elise – the character portrayed by Angelina Jolie, were designed by Colleen Atwood and all of them (except for a vintage dress) were hand made. The inspiration is Hitchcock’s movies, minimalist elegance, as the designer declares for the PEOPLE magazine.

One of the top clothing in the movie includes a pretentious black gown matched with a vintage necklace, worn at the ball scene. The outfit makes her look extremely elegant and accentuates her beauty in a timeless manner. 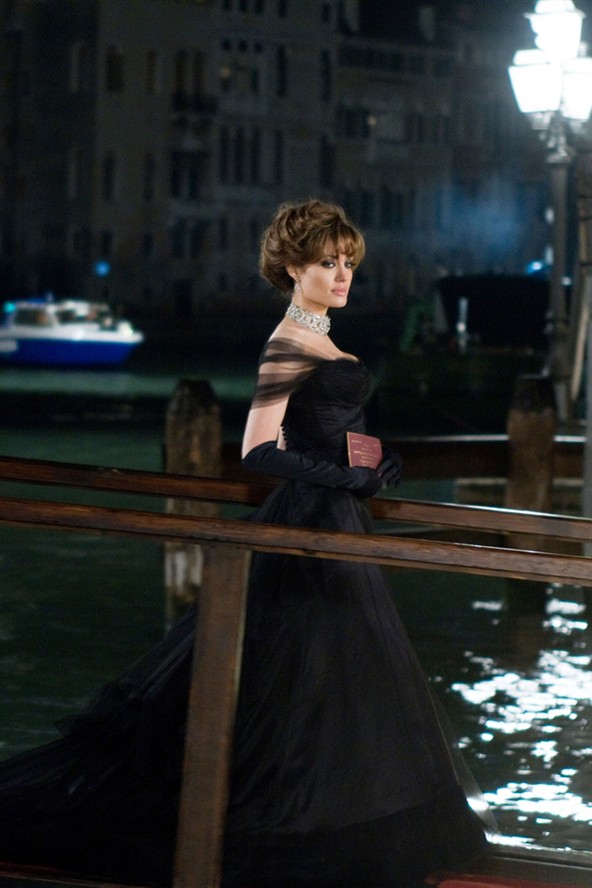 The opening outfit of the movie, the sheath dress in cammel and ivory colors, matched with gloves and a wrap contributes to the mysterious aura of the Elise character. The outfit is inspired by a similar piece designed by the famous Irene Lentz. 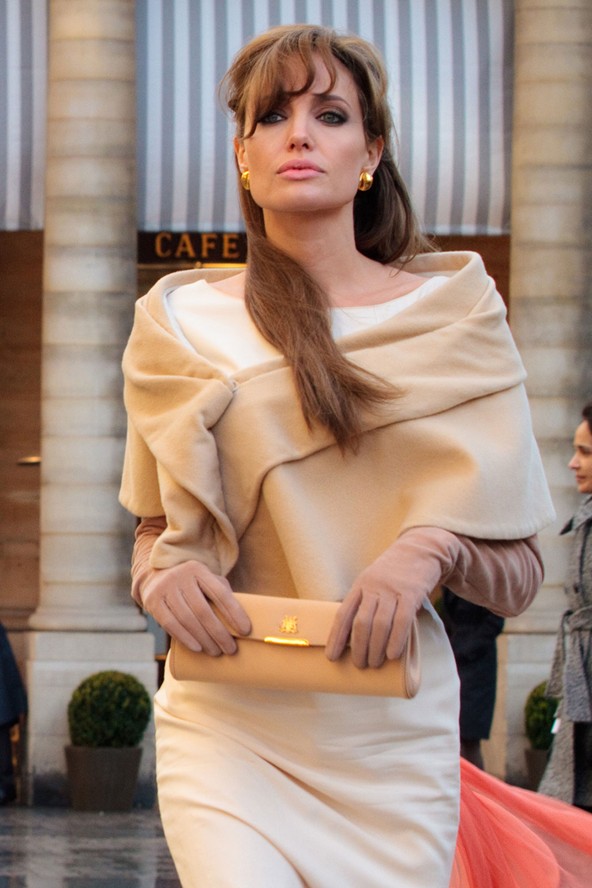 The only piece of clothing not designed specially for the movie was a vintage gray Charles James dress. It fits perfectly Jolie’s body and also to the atmosphere of the movie. 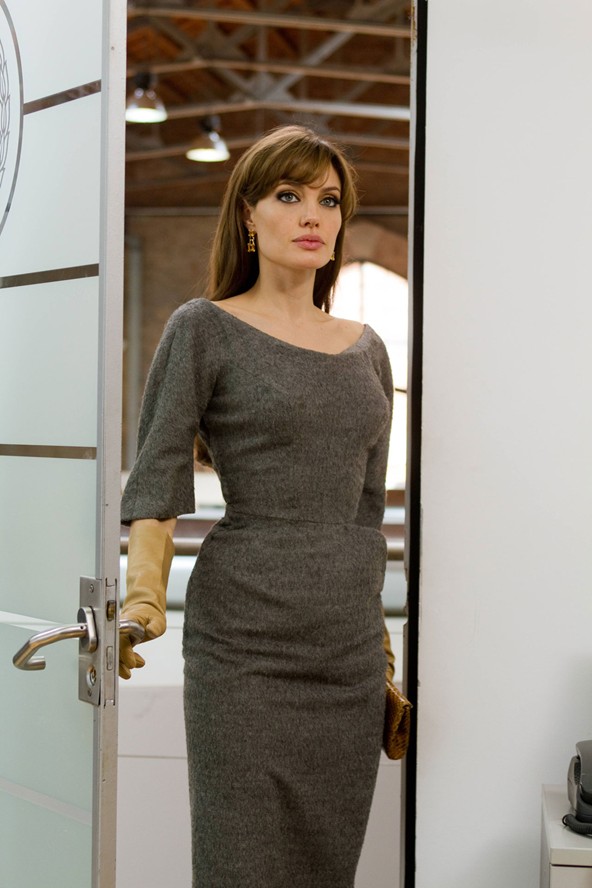 Finally, the white silk dress completed by the red lipstick accentuate the elegance of the character as she is surrounded by a bucket of roses in a luxurious hotel room. 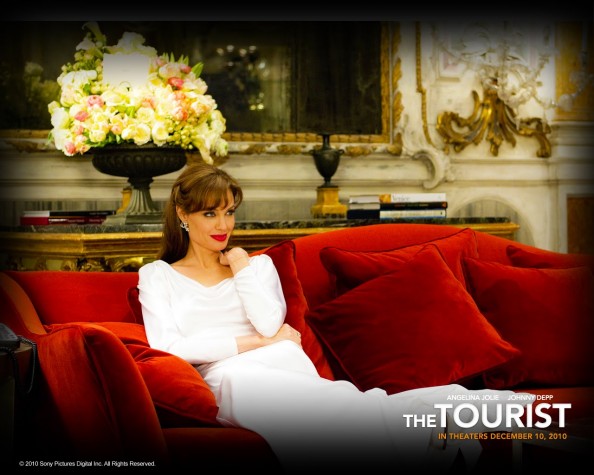 It seems like Angeline Jolie manages to keep the cameras on her in any kind of movie she makes. And even if most of the times the credits go to the costume designer, the actress’ beauty and way of wearing the clothes leave the audience speechless each time. Or do you argue to be otherwise?

The other photos are from ChanelAfterCoco.

[…] Best‘s aubergine dress from the same cocktail party is incredibly gorgeous. I love the detail with the diamond on the waist, and also the back of the dress is a bit […]

[…] Jessica Parker, Uma Thurman, Angelina Jolie and Penelope Cruz are only a few of the actresses who looked amazing on the red carpet so […]

[…] ‘The Tourist‘ was for many of the film critics out there a disappointment, and Gervais wasn’t kind when introducing Johnny Depp, the night’s first presenter, on stage.  ‘Have you seen The Tourist yet?‘ – that is what we call a hilariously inappropriate question. At least Depp proved he knows how to take a joke. […]

minimalist elegance for the outfits to match the elegant beauty of the actress. Love love love