The Scream Of A New Generation? 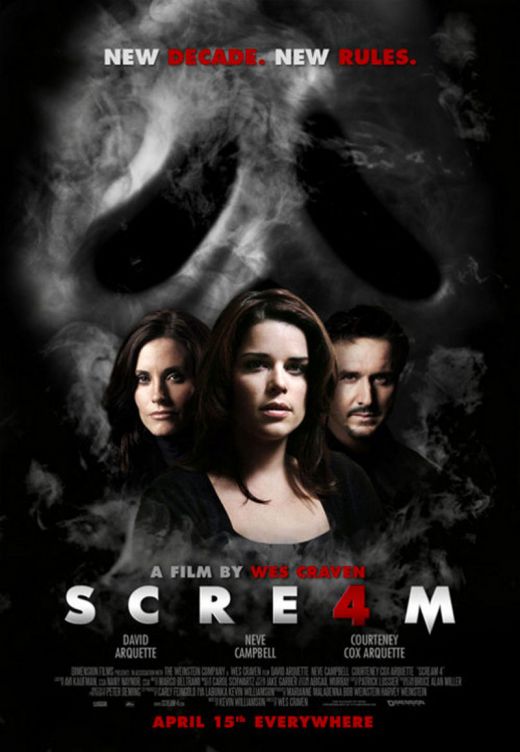 There are some movies you have to watch. Even if you are scared of the idea that they might be really bad and aware of the fact they can’t possibly be as awesome as you expect, you must see them. Those movies are called sequels.

For me, it was like that with both Sex and the city movies. The first one was brutally painful, and the second one, though less painful, still made me miss the good old days when I used to see Carrie and the girls only for 30 minutes a day. But still, I watched them. Because I was a big fan of the TV show and couldn’t resist.

So last year, when I heard a new Scream movie will be coming out, I was like whaaaaat? I’ve seen the first three, like a thousand years ago (big fan of Ghostface at the time), and I distinctly remember the creators making a big deal about the fact that Scream is a trilogy and that’s that. I guess something made them change their minds (if you were wondering, something is probably spelled m-o-n-e-y in this case *evil laughter*).

So I watched it, curious and excited like a teenager. Did I enjoy it? Yes. Truly, deeply, madly. Is it awesome? Well… not really. And here’s why.

First of all, nowadays no one, and I mean no one, knows or cares about Sidney Prescott. Or Neve Campbell for that matter (sorry honey, but where were you for the last, I don’t know, 10 years? Although, yes, you do look really lovely, still). As the trailer came out, I’ve noticed that the target audience for Scream 4 (or Scre4m, yeah, really clever) consists in, as it used to back then… drum roll… teenagers. Well, teenagers these days are different. And as much as the new Scream is trying to appeal to the younger demographics, it mostly fails.

When the first Scream came out it was fresh, witty, funny, a little scary and nothing like I had ever seen before. It was unique. And 7 Saws and one Shaun of the dead later, I felt like the creators of the film are just, well, beating a dead horse. Yes, the characters do mention Facebook, YouTube, Twitter, whatever, but in a forced way, as if the creators only want you to think that the movie adapted to new stuff and is still really hip (I guess this is why they called Scre4m a reboot and not a sequel too). They also got some younger dudes and dudettes to act in order to make some buzz around the film (I think this is the smallest role I’ve ever seen Heather Graham to play, btw, and seeing my dearest Adam Brody die was particularly painful), but something is still missing. Teenagers these days will never get scared by a masked man with a knife, with all the gruesome stuff you can find on the internet. And if they haven’t seen the first three movies, they won’t understand much of the history either.

I also have bad news for the ones who did see the first three movies. Although Gale and Dewey are back, they’re screen time isn’t really what you’d expect. Dewey mostly runs around pointlessly, as Gale tries to befriend the teenagers and fails. She is quite funny though. And Sidney, well, Sidney isn’t scared anymore, which is good. She still has those cute Bambi eyes, in case you were wondering.

To conclude the why this movie isn’t good section, I think it’s pretty sad that they make fun about never ending horror franchises, when with this version Scream really became one of them too.

Now let’s get to the good parts, because, as I said, I enjoyed the movie. So, first of all, Hayden Panatierre is freakin’ awesome. There, I said it. I loved her in Scream 4. And all the younger actors were pretty good also. We once again have the rules, one of the characteristics of Scream movies I’ve always liked, and the story unravels nicely in the end. When you find out who the killer is, you understand the motive. The killing scenes aren’t gruesome, only one of them is particularly violent, but it’s fun to see the many, many ways you can kill someone with a knife. And the opening scene is magnificent. Kudos for that. Also, we have some funny moments, I’ll give you that. I can truly say that Scre4m is the second best Scream movie ever. The best being, without a doubt, the original.

So basically, is Scream 4 the Scream of a new generation? No. Because the original Scream, back then, was awesome. It defined a genre. It was original. I still remember now, lots of years later, entire scenes from the movie, dialogues and, well… that feeling of not being truly certain if you are scared or amused. If you liked Scream 1, you will like Scre4m too. But I can bet you that three or four days after you’ve seen it you won’t remember much. And that is just sad.

Have you seen Scre4m? What do you think?

[…] Scroll down for more photos and let us know what you think about the photoshoot. Are you hoping for yet another ‘Sex and the City’ sequel? […]

for the record, that isn’t heather graham. it’s marley shelton

Marley plays Deputy Judy. Heather appears for like 2-3 seconds, in one of the Stab movies 🙂