10 Things You Did Not Know About Van Gogh

We never see behind the picture. There are artists whose works were influenced by their personal lives and artists who didn’t allow the two to mingle. Well, Vincent van Gogh wasn’t one of the latter; everything that happened to him was reflected in his art.

We know some things about artists that are more or less true, some we still debate on, some we don’t have a clue about – usually those are the most interesting. So here are some interesting facts about Vincent van Gogh.

Van Gogh’s paintings have gone on to inspire millions and you might not have known that even some of the best slot sites in the UK have a self-titled slot game based around the famous artist, created by Sthlm Gaming.

Vincent worked as a librarian as a certain point. If you come to think of it, he fits the profile perfectly: unwashed, cranky and with utter disregard for the clients. He used to sit in a corner wearing his English top hat and besides ignoring the customers, he’d do a remarkable task: he’d translate the Bible into 4 languages: Dutch, German, English and French. He’d divide the page into four and inch his way through it in all of them simultaneously. 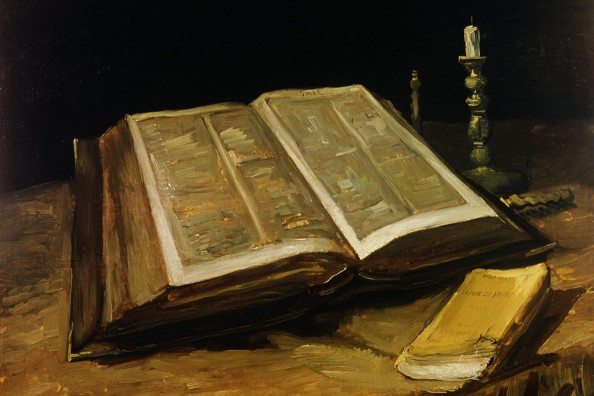 He used to walk a lot. During his stay in London he used to walk from Brixton to Covent Garden- a journey that took him 45 minutes. He was a ridiculously fast walker: he walked over 100 miles in 3 days from London to Ramsgate, where his sister lived. His shoes were truly used, a reason for which he found it appropriate to pay them his respects in painting. 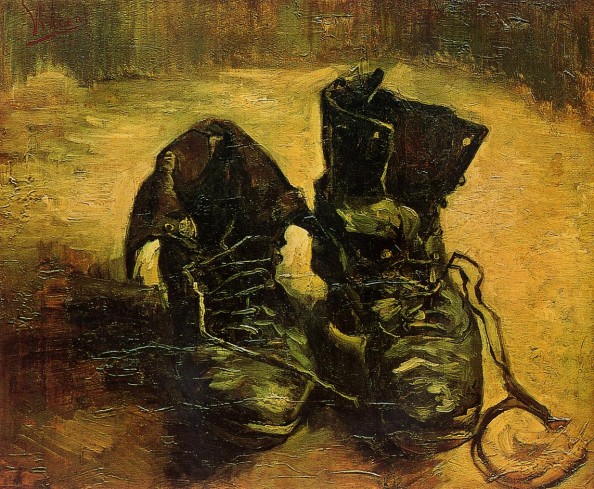 Vincent van Gogh always thought of stars fondly. He painted his Starry Nights at night. Starry Night 1, painted in Arles was done by putting candles in his straw hat just to have enough light to paint. The second one was done in the time he spent in the hospital in Saint Remy. He wrote to his brother, Theo, in a letter: “Death is like a journey to the stars; to die peacefully is like going there on foot.” 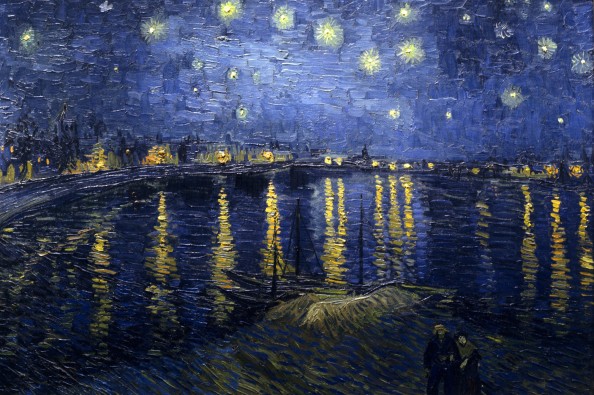 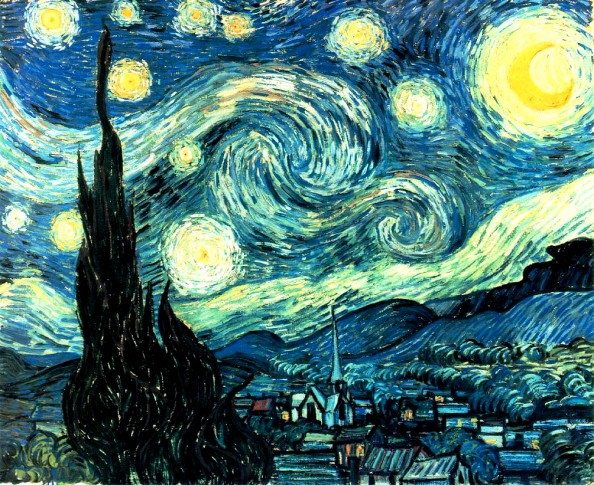 He had a rather unusual taste in women: he liked them faded, worn-out. Vincent went to such great lengths that once, he put his hand over the flame of a candle and promised to keep it there unless he could see the woman he fell in love with. Most of the women he loved were  widows and prostitutes. In this respect, it sounds familiar: all artists have keen interests in prostitutes. His favorite was Sien, a woman with which he lived for a while; he even wanted to marry her, despite his family opposing it. 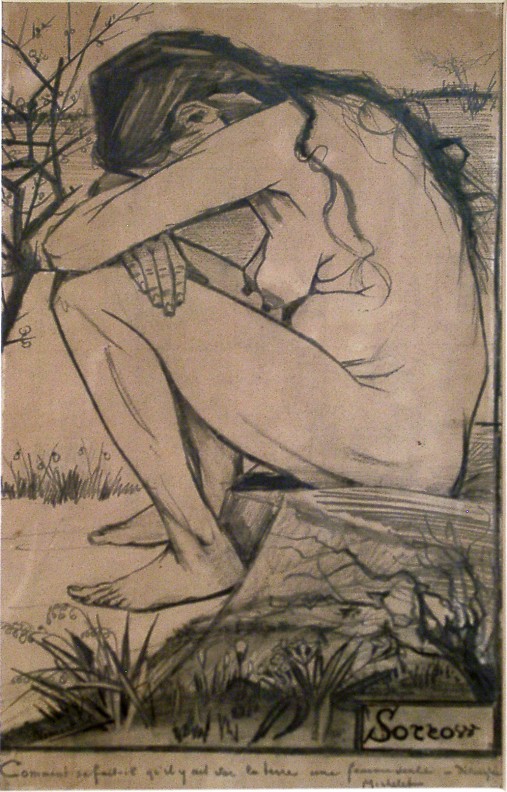 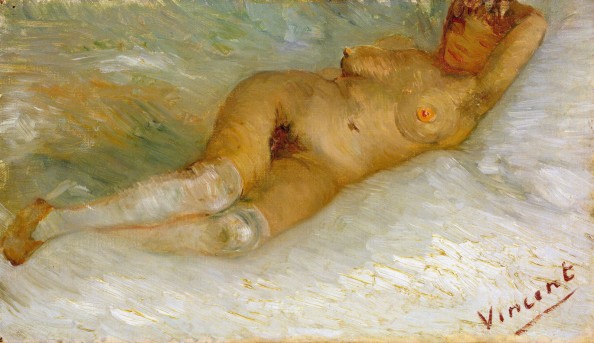 Yes, he did indeed cut his ear and sent it to his favorite prostitute. Most people blame his gesture on insanity. But most people don’t know the context in which it happened. Vincent was living  with his friend Paul Gaugain, in Arles, where they used to go to bullfights together; usually, after a matador defeated the bull, he’d get the ear of that bull as a symbol of his triumph. Picture everything in this context and think about the fact that Gaugain was successful with women, unlike Vincent who actually wanted to hand his ear to his friend and admit his defeat. 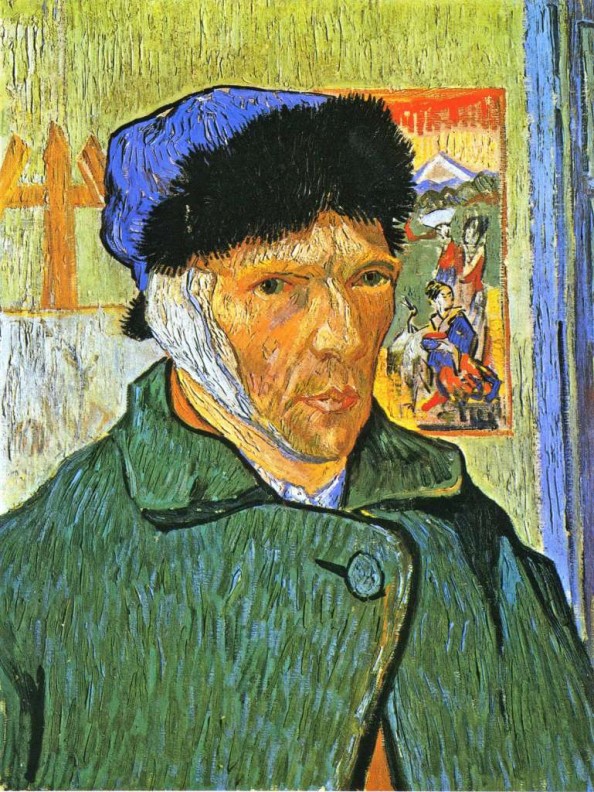 6. The brother he always had

During his life, Vincent wrote more than 800 letters to his younger brother, Theo,  who supported him in his work. Theo was also the one who bribed Gaugain to stay with Vincent in the yellow house from Arles. All these letters are now bound into hefty volumes entitled Dear Theo. After Vincent’s death, Theo’s health weakened and he perished as well. The two now rest peacefully next to each other, in the Auvers- sur- Oise cemetery. 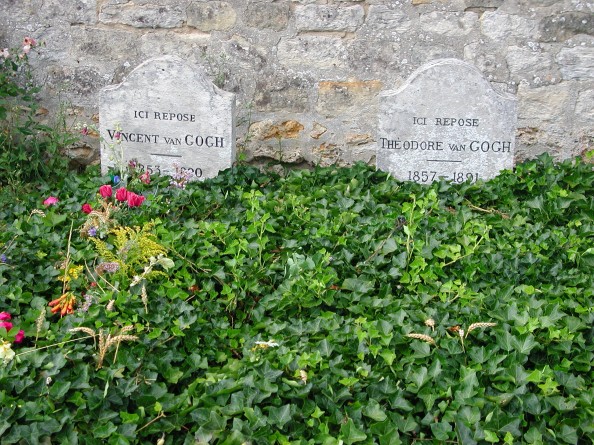 7. That high note of yellow

Van Gogh had a feeling for color, especially yellow. He could reach with his brush an easel what you may call “a high pitched yellow”. Take some time and look at some of the paintings and you will understand what that means. 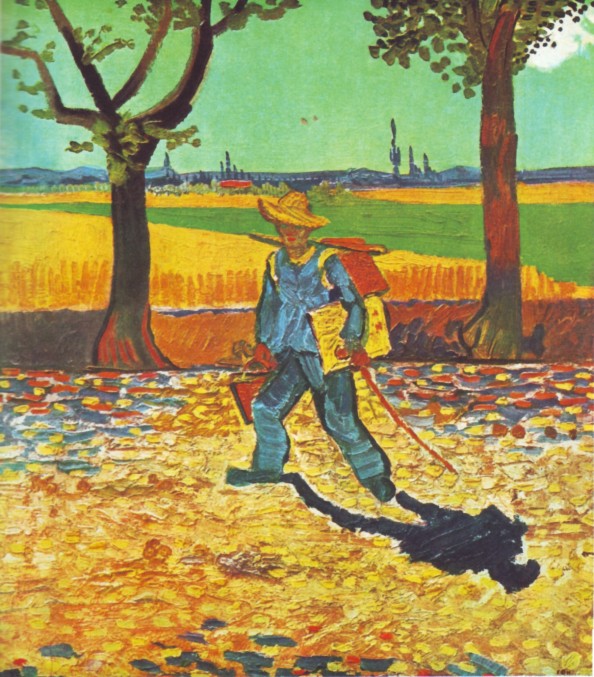 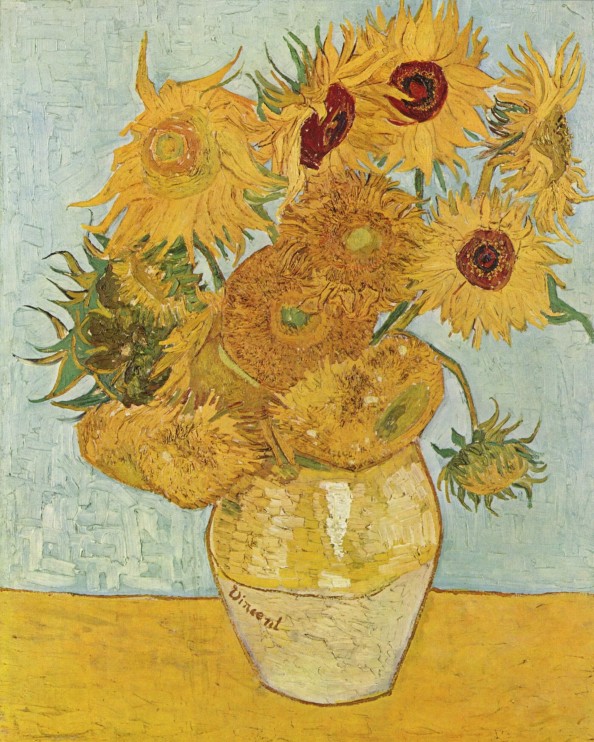 Some people blame it on glaucoma, a disease which damages the optical nerve to blindness. But Vincent used to drink very strong coffee, which apparently enhanced his perception of colors and resulted in this very strong hue of yellow.

Who countest the steps of the sun

Seeking after that sweet golden clime

Where the traveler’s journey is done. 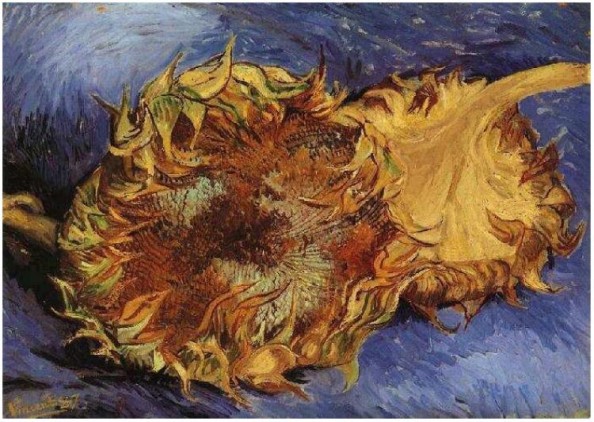 This stanza fits what Vincent was doing when he was painting the sunflowers. He walked to the sunflower fields, picked up several of them, took them back to the yellow house and painted them until they wilted. He created his sunflowers to welcome his friend, Paul Gaugain, who was coming to live with him. His intention was noble; when expecting guests, people usually put flowers in the rooms of their guests. But imagine how Gaugain felt when he entered the small room from the yellow house and saw all that yellow almost screaming at him… 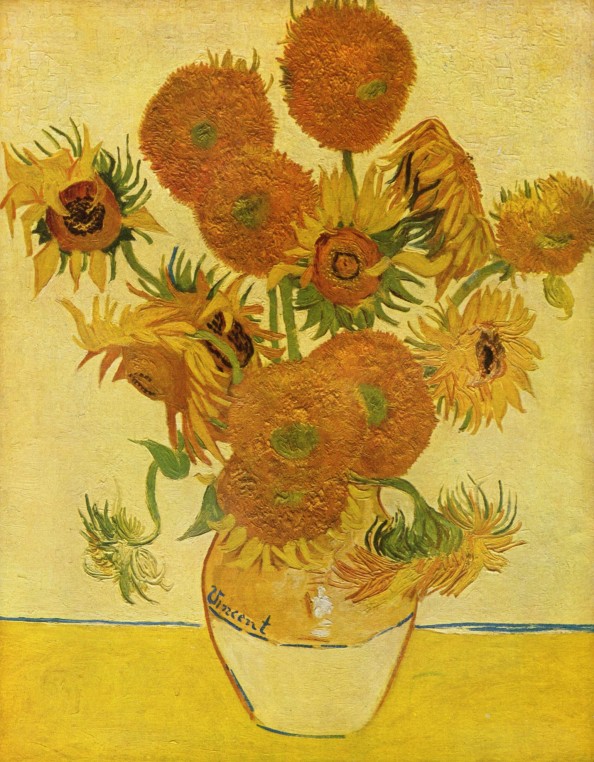 9. Vincent and not Van Gogh

He never signed any of his paintings with Van Gogh. During his stay in England, he was used to everyone misspelling his name: instead of van Gogh, they called him van Gof. So he began signing all his painting with Vincent. 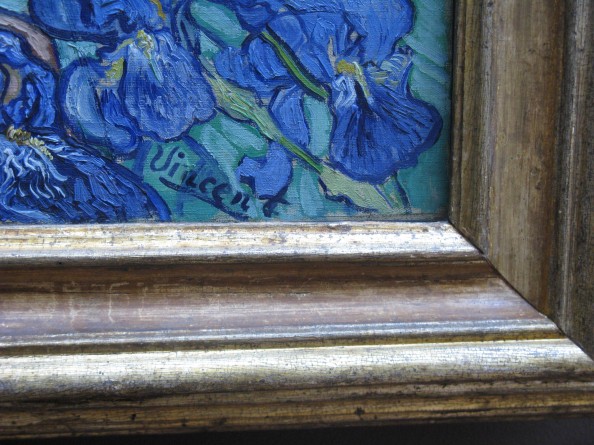 Flower parades are organized annually in Van Gogh’s birthplace, Zundert. The truth is he would have hated it. He was the secluded type, that disliked crowds and excessive attention. 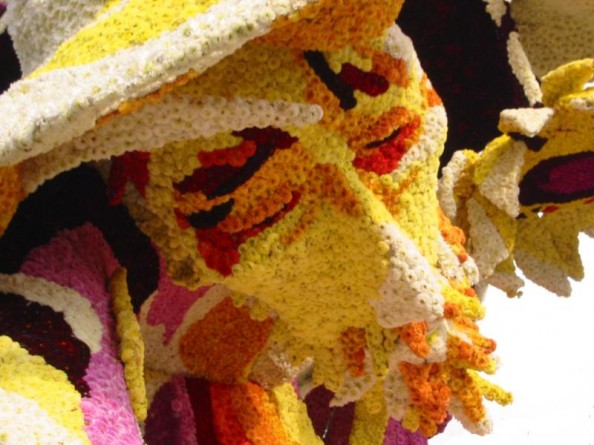 There are so many things that remain shrouded in mystery for us. Sometimes time brings them to the light. Other times, it just embellishes the layer of unknown over them. For Vincent van Gogh it was both; we still don’t know what mental illness he really suffered from or if he really cut his entire ear or just a part of it. Despite all this, it’s what he left behind in the world that’s important.

Top 10 Things You Did Not Know About Van Gogh | UniqueDaily.com

[…] we still debate on, some we don’t have a clue about – usually those are the most interesting. So here are some interesting facts about Vincent van Gogh.” w/ […]

[…] artist at the time, one application at a time. The above mentioned applications might not make you an expert in Vincent van Gogh, but if you start liking his work, they will certainly pave the way to further readings. Share […]

[…] and beautiful women are tantalizing, then look no further. You don’t even have to choose, as famous artworks and gorgeous women have merged in a photographic […]

[…] 21. Vincent van Gogh used to put candles in his hat, so he could paint at night. He walked ridiculously fast, was a widow-chaser, and never once signed his paintings “Van Gogh”. – Source […]

Van Gogh never signed Van Gogh in any of his paintings!

[…] they were mostly chauvinists. Renoir? Hated motorists. Degas? Hated bankers. Picasso? Hated women. Van Gogh? Hated everyone. Only in the wing inhabited by our progressive era of blobs and blotches without […]

[…] with dyes (he called his technique ‘the tube-squeezing method’), lighting techniques (he wore a hat with candles in order to be able to draw at night) and had a very down-to-earth attitude to painting. All of this, quite the opposite of what we are […]

Fact of the Day | Daily Facts I 60 Interesting Facts Of The Day | KickassFacts.com

[…] Vincent van Gogh used to put candles in his hat, so he could paint at night. He walked ridiculously fast, was a widow-chaser, and never once signed his paintings “Van Gogh”. – Source […]