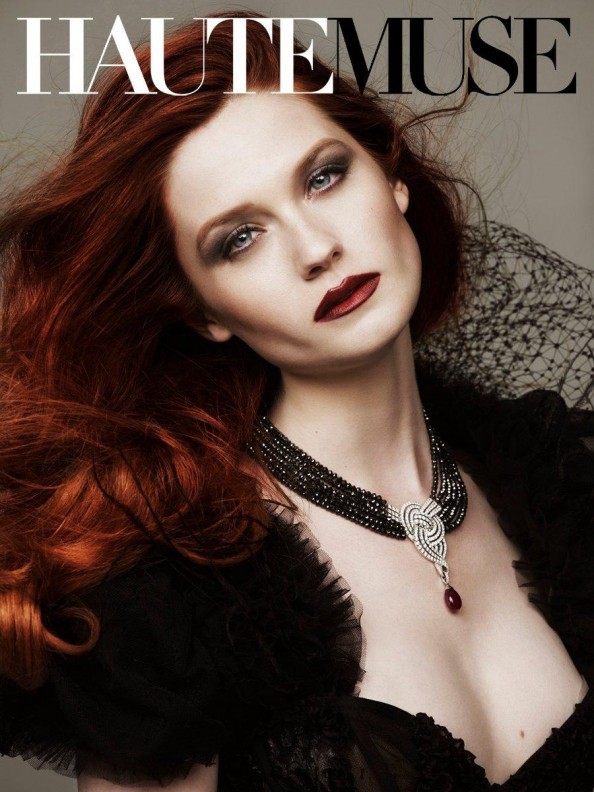 Bonnie Wright, mostly known for the role of Ginny Weasley in the Harry Potter movies, poses like she has never been seen before on this month’s issue of Haute Muse, Qatar’s new fashion magazine.

While Bonnie is promoting Harry Potter and The Deathly Hallows: Part II, she embraces an extremely seductive attitude which not only distances her from the teenage look, but it also makes her more mature than ever. The actress, aged 20, could might as well be mistaken for 40, with the smokey eyes and plum lipstick which perfectly matches her beautiful red hair.

It seems like all the actors are trying to get rid off the Harry Potter image they have been portraying for years, and Emma Watson’s pixie look in 2010 was one of the first signs. According to the Daily Mail, Bonnie’s next move is a trip to Indonesia to film her next movie, The Philosophers.

Meanwhile, we are all exciting to see rest of the editorial, because Bonnie looks gorgeous and different in a good way; but most of all, we can’t wait to see Ginny one last time in the Harry Potter movie which will premiere July 17th.

Unfortunately for her, it will take some time until posterity will stop associating her Harry Potter saga, because I hear there will be some great stuff going on between Ginny and Harry in the final movie.

What do you think of this other side of the actress? Do you think she will become an iconic fashion figure, just like her colleague Emma Watson?

[…] already seen Bonnie looking gorgeous on Haute Muse, as she was styled and photographed  by Victoria Adcock and Jonas Bresnan, now it’s time to […]

She looks amazing, wow. Her looks are far more alluring than Emma Watson’s in my honest opinion. The red hair and the blue eyes are so striking. She has lovely features.

Indeed she looks amazing in the editorial. But I think it’s also the make up. She has a lot of potential nonetheless. Can’t wait to see her outside of Harry Potter.