Kate Middleton’s Fashion Style In The Royal Tour Of Canada: Day 1 And 2 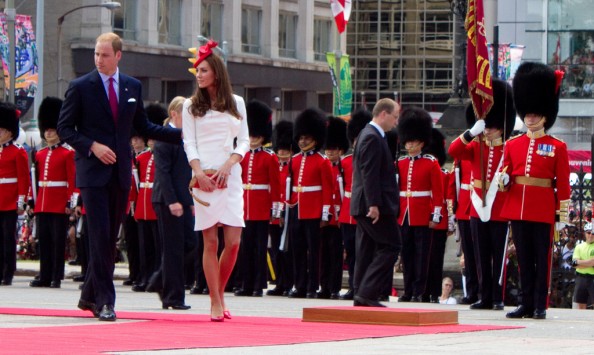 The Duke and Duchess of Cambridge have began the 11 day North American Tour on Thursday, June 30th, as the newly weds arrived in Ottawa. The first official royal visit of the couple is certainly going to be a key point on their world presence but it is very likely that it will turn into a Kate-mania.

The Duchess’ exquisite taste in fashion is no secret to anyone, nor the fact that everything she wears becomes a trend, being sold out in less than 24 hours. As fashion people speculate about Kate Middleton’s style, she begins the tour by surprising everyone with her impeccable, elegant, simple yet noble look.

The couple plans to keep the group to a minimum, so Kate did not bring a personal stylist or dresser, but so far her choices demonstrate that she manages well without one. However, she is expected to change in no more than 40 outfits.

Kate started on the right foot upon boarding for Canada at Heathrow airport in London. A navy dress designed by Roland Mouret completed by a navy blazer bearing the Canadian label Smythe les Vestes – in honor of her hosts, and a Mulberry handbag gave her a very diplomatic and business-like look. The Manolo Bhlanik stilletos she wore are the must have of any fashionista. Take a closer look here.

As the couple arrived in Ottawa, where they were cheerfully welcomed by the crowds, the Duchess changed into a navy lace knee-lenght dress of Erdem Moralioglu, a Canadian designer from Montreal, based in London. She wore beige LK Bennett pumps, that we have seen her wear often lately.

Later in the evening, at Rideau Hall, Kate put on a less formal yet charming dress for a barbecue evening. She went for a bird-print Issa dress this time, changing for the third time in the first day of the royal tour.

Day 2 of the royal tour found the couple in Gatineau, Quebec. The Duchess wore her recycled white engagement dress, of the brand Reiss, and a red leaf fascinator by Sylvia Fletcher. Compliments were again made to the Canadian people, through the white and red combination. The maple leaf brooch was loaned to Kate by the Queen.

Later in the evening, a purple Issa dress was the choice for the Canada Day concert in Ottawa. The Duchess kept the maple dress as she looked gorgeous wearing her favorite designer.

What do you think of Kate’s fashion choices so far? What other brands do you think she will wear in the Royal Tour? Cast your vote in the poll below and let us know what you think in the comments.

Check out more photos from day 1 and 2 here and here.

Kate Middleton’s Fashion Style In The Royal Tour Of Canada: Day 1 And 2

[…] do you think of Kate Middleton’s dresses on Day 3 and 4? Do you find the safety of her outfits appropriate for her royalty, or would you […]

[…] jackets and blazers for a while now. Recently, Smythe received international attention when The Duchess of Cambridge (Kate Middleton) was seen wearing a Smythe blazer during her visit to Canada. I may just have to […]

[…] J Brand navy jeans from Day 6 were also kept, to which Kate added the famous Smythe navy blazer, the same one she wore in London when she departed for Canada. Finally, the Duchess wore for the […]

[…] if the hysteria of the royal wedding and Kate Middleton’s fashion choices in the royal tour of Canada were not enough, it seems like the Kate mania continues.  The Duchess of Cambridge scores another […]

[…] fashion house? Did this classic elegant and simplistic design wow you? Was it suitable for Miss Kate Middleton? Cast your vote in the poll below and express your feelings in the […]

[…] popular recycled item is Kate Middleton’s white Reiss engagement dress, which was so beautifully themed for the Canada Day celebrations in Ottawa, back on July […]