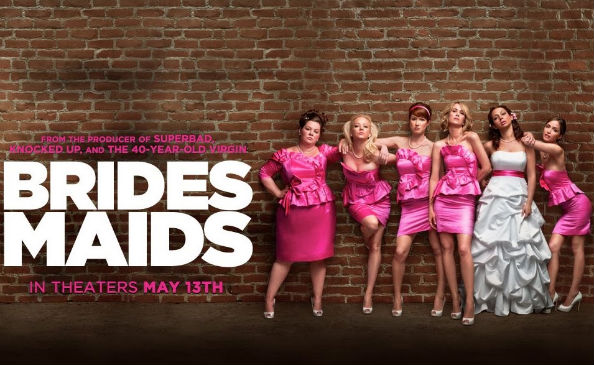 First of all, let me just say that I was really looking forward to this movie. Judd Apatow, the producer, was also responsible for Knocked-up and The 40-Year Old Virgin, and I believe that Kristen Wiig, who plays Annie, the main character, is pretty funny. There were voices that said it was the female version of The Hangover, the trailer was looking good and it also starred Melissa McCarthy, who I love ever since her great portrayal of Sookie in the TV show Gilmore Girls.  All good premises, don’t you think?

And then the reviews came out, and they were all positive. The Guardian, The NY Times, The Telegraph, all wrote with enthusiasm about Bridesmaids and about how it’s witty and terrifically funny. They even named it the funniest movie of the year. Obviously I was impressed and even more eager to see it. 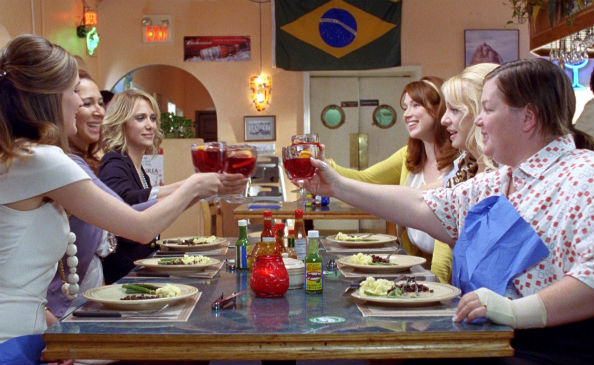 But after actually watching it… I was disappointed. 125 minutes of my life wasted on a film with a huge advertising campaign that I felt deceived me. Yes, I know most of you movie fans out there loved it, I got that after reading tons of reviews online, but personally, I can’t understand why.  The title of this article was, initially, Five reasons why you will hate Bridesmaids, but then I realized I didn’t actually hate the movie. I was just expecting too much and Bridesmaids failed to deliver. And here’s why, if you haven’t seen it, I think you won’t like it either.

This is a chick flick, in all it’s glory. It’s about women in love, women getting married, women hating other women, women singing, having fits in public and being unable to control their hormones. It was a lot to digest even for me, and I’m a chick. Although I have to admit – for all you men out there, the movie destroys the myth [spoiler alert!!!] that women don’t poop. Damn, our secret is finally out.

I don’t like long movies and feel that 90 minutes is enough, especially for comedies. Well, Bridesmaids has two hours. Two long hours. At the end, I almost dozed off a little. I would have understood if the writers would have tried to develop the characters, but no. All we get is useless long scenes that don’t bring anything to the story and could have easily been left out.

3. It’s just not that funny

Yes, I laughed. Two times. In two hours, two times is just not enough. It’s like the characters are just trying so hard to make us laugh, using all the tricks in the book. Unfortunately, when humor resorts to farts, vomit or toilet scenes it can only go downhill from there. You enjoy sophisticated or classy humor? This is clearly not the movie for you.

Wedding plans going wrong, BFF’s having fights and then reconciling on the big day, a relationship with a bumpy start but happy ending… Cliches? Oh, no! Just your typicall R-rated Hollywood comedy.

5. Lack of chemistry between characters

Annie evolves from being likeable to being annoying, and it’s mostly because of her relationships with the other characters. She and the bride are supposed to be best friends, but  Ijust don’t see it. Their relationship seems superficial and forced. Furthermore, she has a  frenemy, but the two just don’t suceed to sell the whole love/hate relationship. They should have watched Mean Girls a couple of times.

OK, so there you have it. I didn’t like Bridesmaids. Hit the comments and let me know if I’m wrong. I can take it.

[…] photoshoot at a magnificent seventeenth-century Cotswolds mansion. Other than that Kate had sixteen bridesmaids and flower girls, of ages between two and fourteen and the dress she wore on the big day was […]

I couldn’t agree more with you! After anxiously awaiting seeing this movie, I finally got the chance to the other night. I think I laughed all of 3x, and not a laugh out loud laugh…just a mere giggle. And may I add, the only giggles were for the bridesmaid Megan’s jokes. Kristin Wiig is super annoying and not a likeable character at all. The movie is so SLOW moving and filled with unnecessary scenes that fall miserably short of entertainment. All of the scenes supposedly leading up to a big laugh, failed miserably. Long, boring, and completely overly hyped movie. Glad someone else agreed with me!

Please give us an example of sophisticated or classy humor. In my mind “sophisticated” or “classy” means smart-ass asshole. People who don’t embrace silliness are self conscious assholes.