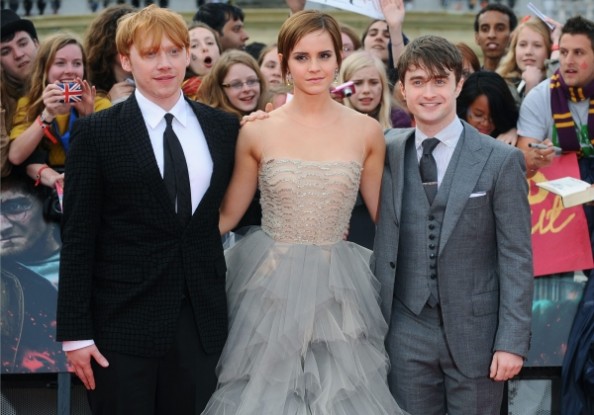 It’s hard to say goodbye to Harry Potter. But it’s always fun to talk about the fashion. More accurately, the outfits Emma Watson and her co-stars and fellow celebrities wore as they hit the red carpet for the world premiere of ‘Harry Potter and the Deathly Hallows Part 2‘, held in London, on July 7.

I didn’t actually watch the premiere, streamed online, but I did see some videos afterwards and was pretty impressed with the audience, the setup and the cast itself. Emma Watson was extremly emotional and even teared up as her co-stars Daniel Radcliffe and Rupert Grint thanked fans and each other. Let’s just admit it: it’s really the end of an era!

Leaving emotions aside, Emma Watson looked magical wearing a dove gray embroidered tulle-bottom gown by Oscar de la Renta, from the Fall 2011 collection. She reminded me a little of Olivia Wilde and the gorgeous Marchesa dress she wore at the 2011 Golden Globe Awards. The gowns don’t really look alike, but I had the same feeling as I first saw both of them: wow!

Emma later paired the dress with a white jacket from Antonio Berardi’s Spring 2011 collection. It’s hard to find something that can really complete such an amazing dress, but she managed to create a perfect look. Later on, at the after-party, the 21-year-old actress opted for a Elie Saab Spring 2011 Couture mini dress. 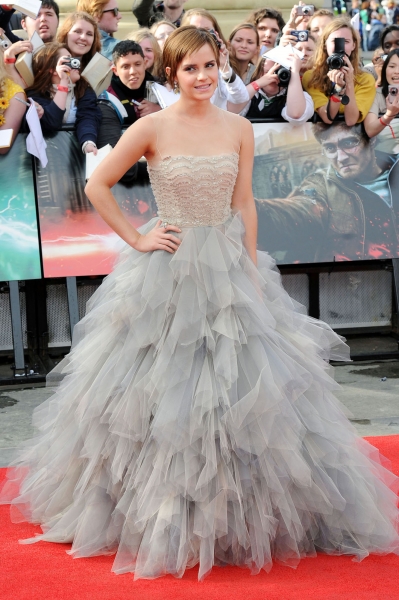 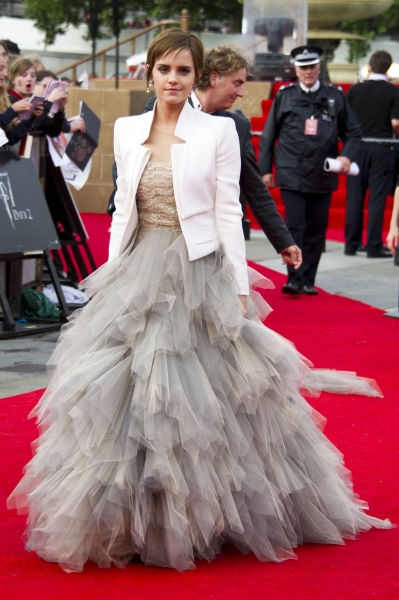 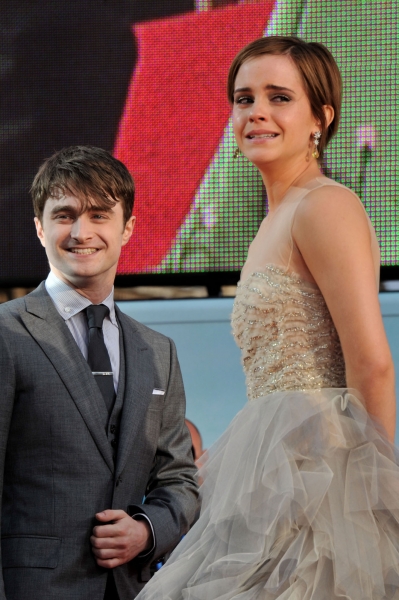 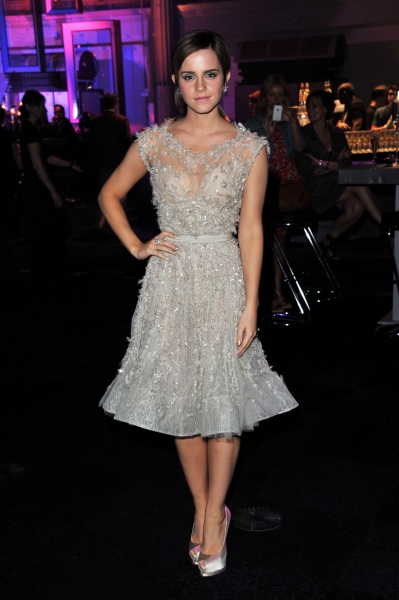 Now let’s talk about the other Hollywood-familiar faces that attended the premiere. Clemence Poesy wore a Nina Ricci dress from the Spring 2011 collection, accented with a black waistband. Although a little less glamorous, I think the French actress did good. 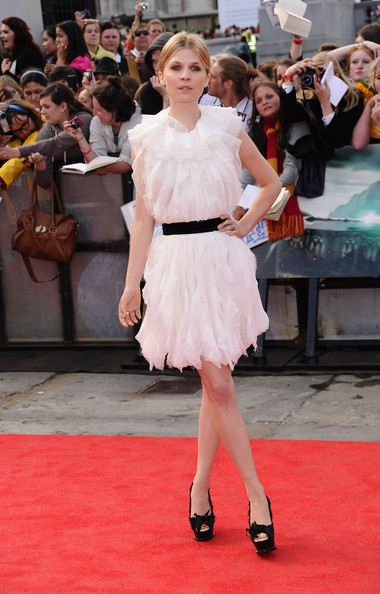 Bonnie Wright, on the other hand, was a bit too conservative for my personal taste. She opted for a peach long sleeve dress and sandals. I have to admit though that her earrings are absolutely fabulous, don’t you think? 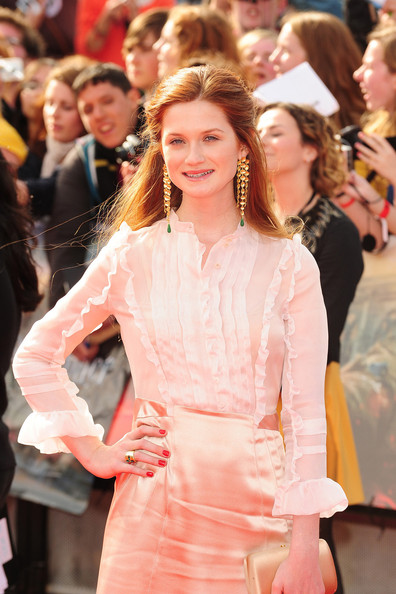 J. K. Rowling also choose a dramatic gown, probably because this was a huge night for her. She wore an Oscar de la Renta green dress from the Spring 2011 collection, with pink carnation embroidered details and pink accessories. 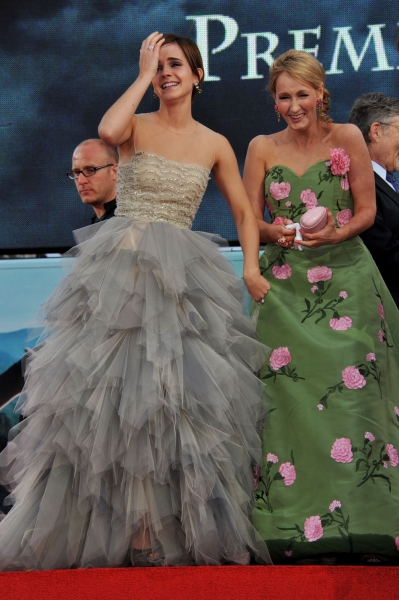 Helena Bonham Carter, known for her usually daring wardrobe red carpet choices, decided to keep it simple and elegant, with a long gown. She still brought some of her fashion craziness on the red carpet, wearing a flowery pink headpiece. 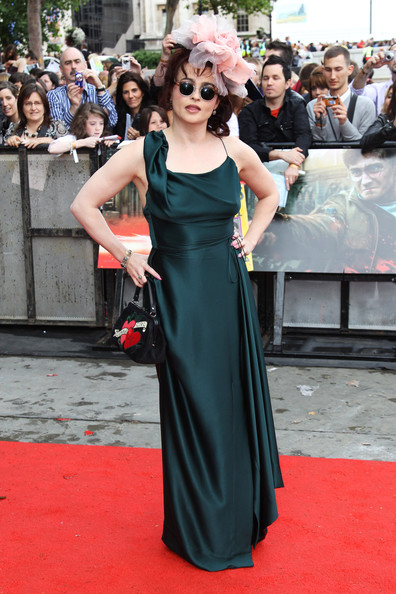 Mollie King, from the girl group The Saturdays, also attended the world premiere of ‘Harry Potter and the Deathly Hallows Part 2’. She wore a  Spring 2011 Julien Macdonald pink dress. I don’t really think it was adequate for this particular occasion. 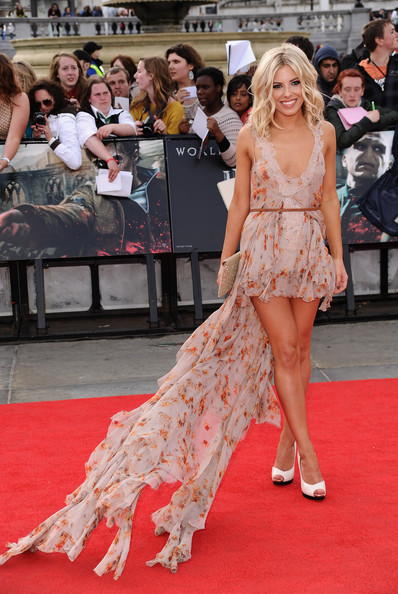 And what about the boys? Well, they sure grew up good. Daniel Radcliffe opted for a custom Simon Spurr suit. Also, Tom Felton and Rupert Grint wore elegant, black suits. 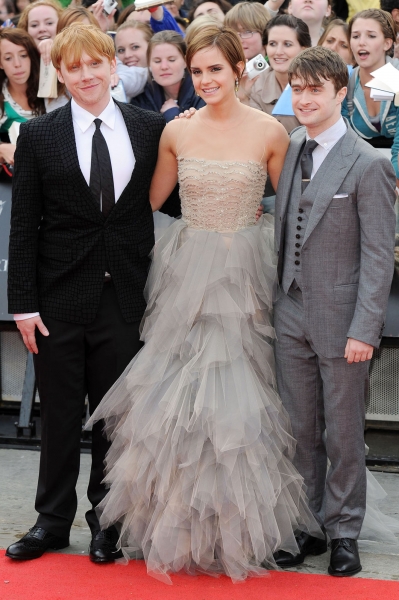 That’s a wrap! What do you think about the outfits? Hit the comments and let us know which one is your favorite. And don’t forget – it all ends on July 15!

[…] Watson looked simply adorable at the premiere of ‘Harry Potter and the Deathly Hallows – Part 2‘ held at the Lincoln Center’s Avery Fisher Hall on Monday, July […]

[…] the premiere of Harry Potter and the Deathly Hallows: Part II just two days away, Emma Watson graces the front page of high fashion magazines one after the […]

[…] for one, just couldn’t wait to see his work, so here you can see some of his glamorous outfits structured according to their main characteristic or […]

[…] such as Daniel Radcliffe, Rupert Grint and Emma Watson. Now that most of you have already seen Harry Potter and the Deathly Hallows: Part II and know how the epic saga ends, it’s time to look back at one of the most memorable […]

[…] portraying Harry Potter for almost a decade, I think it will be fun to see Daniel Radcliffe return on the big screen for his most recent project, ‘The Woman in Black‘.  This […]

Excellent website. Plenty of helpful information here. I am sending it to some pals ans also sharing in delicious. And naturally, thank you on your sweat!