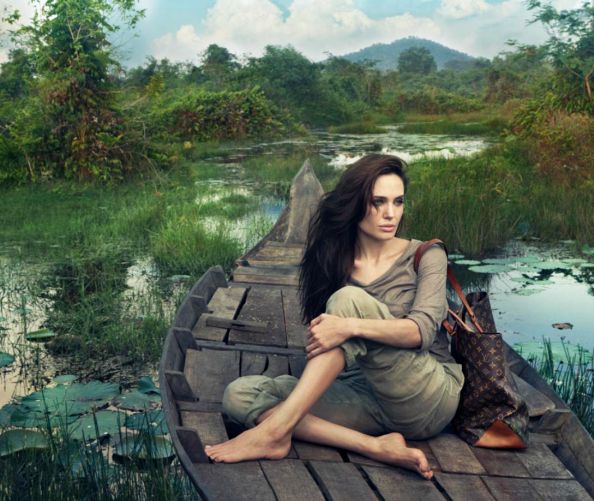 Hollywood actress Angelina Jolie is the new image for Louis Vuitton’s campaign ‘Core Values’, joining the list of personalities such as Keith Richards, Catherine Deneuve, Bono (U2) and Tony Blair who have starred in the brand’s famous campaign. The campaign was launched in 2007 and each time, it tries to consolidate the fundamental values of the famous fashion house. These values refer mostly to product quality which implicitly makes their products last longer.

Photographer Annie Leibovitz manages to capture Angelina Jolie’s simplicity in the campaign’s advert as the actress sits barefoot on a wooden boat, wearing her own clothes and no makeup, with her 6 year-old monogrammed Alto bag hanging on her left shoulder. The location chosen this time is a serene lakeside landscape in Cambodia’s Siem Reap province. The actress discovered the country back in 2000 while filming ‘Lara Croft: Tomb Raider’, this also being the place where she started her humanitarian activism.

The advert created by the French fashion house for this campaign is expected to reach a broader audience than usual, focusing less on the company’s ideals concerning fashion-marketing and more on simple ideals such as travelling and handicraft.

There are no official numbers referring to the contract’s value but rumor has it it’s somewhere around $10 million, which is a great deal by any standards. Some say that she already donated a large amount to ‘Maddox Jolie-Pitt Foundation’, which Angelina founded in 2003 under the name ‘Maddox Jolie Project’ and then renamed in 2007.

Here is the lovely interview where Angelina talks about her visit to Cambodia and her perception of the Third World Countries lifestyle.

[…] before they became big shot movie stars. We get to see Denzel Washington, Scarlett Johansson, Angelina Jolie, Jack Nicholson and Nicole Kidman in some of their first roles, performing in low budget movies or […]