Funny ‘Two and a Half Men’ Promo Picture 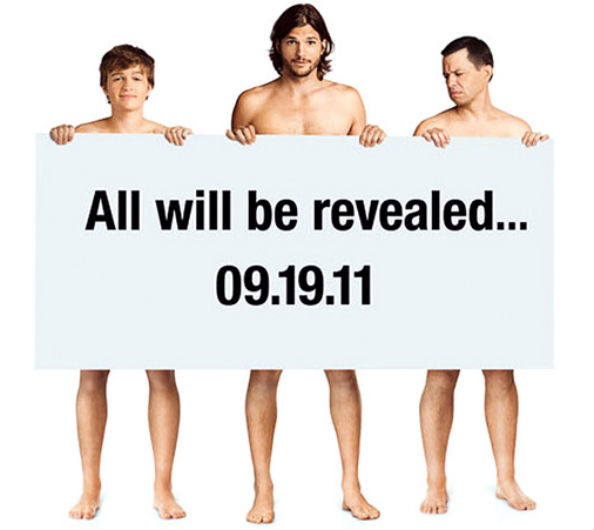 If Charlie Sheen is currently crossing his fingers hoping that a network will show interest in his new sitcom, his former co-stars, Jon Cryer and Angus T. Jones, along with new cast member Ashton Kutcher appear in a funny promotional picture for the new season of ‘Two and a Half Men’.

The picture shows the three co-stars nearly nude, holding up a sign that says ‘All will be revealed’,  teasing what’s in store when the comedy’s ninth season premieres on Monday, Sept. 19, on CBS.

I think this will be pretty effective, because the curiosity surrounding the next ‘Men’ season has built up even since it was announced that Kutcher will take Charlie Sheen’s place. ‘I can’t replace [him] but I’m going to work my ass off to entertain the hell out of people!’, he said.

Do you have any thoughts about what Cryer is frowning at? And, more important, will you watch the ninth season of ‘Two and a half men’? Hit the comments and let us know!

[…] have been many rumors concerning the ninth season of ‘Two And A Half Men‘. With Charlie Sheen gone and Ashton Kutcher joining the cast there should be a lot of […]

Well all I wanted was to see the first episode, and I have, thats all I need to say !!!!

I’m now waiting on Anger management to began, cause I love and miss my Charlie Sheen !!!!