Almodóvar’s Creepy ‘The Skin I Live In’ Trailer Released 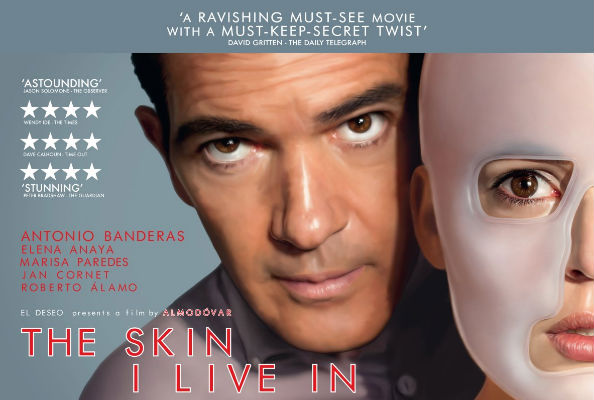 ‘The Skin I Live In’ Poster, source

When it comes to Pedro Almodóvar’s movies, you either love them or hate them. His style is so unique that you can spot it from distance. Personally, after I saw ‘La Mala Education’ I was hooked.

This year, he’s back with ‘The Skin I Live In’ or ‘La piel que habito‘, because it always sounds better in Spanish, doesn’t it? He reunited with Antonio Banderas and adapted for the big screen the 2003 novel ‘Mygale’, by Thierry Jonquet.

Ever since his wife was burned in a car crash, Dr. Robert Ledgard, an eminent plastic surgeon, has been interested in creating a new skin with which he could have saved her. After 12 years, he manages to cultivate a skin that is a real shield against every assault. In addition to years of study and experimentation, Robert needed a further three things: no scruples, an accomplice and a human guinea pig. Scruples were never a problem. Marilia, the woman who looked after him from the day he was born, is his most faithful accomplice. And as for the human guinea pig…

The film premiered at this years Cannes Festival and it will make its North American debut at the Toronto International Film Festival before hitting theaters on Oct. 14.

The creepy trailer released recently gives us an idea about the tone of the film – a mixture of horror, sci-fi, melodrama and suspense. ‘The Skin I Live In’ also stars Elena Anaya and Marisa Paredes.

Looking forward to it? I surely am.

[…] already talked about this one on several occasions. A brilliant plastic surgeon, haunted by past tragedies, creates a type of synthetic skin […]