The New Beavis And Butthead – A Sneak Peek 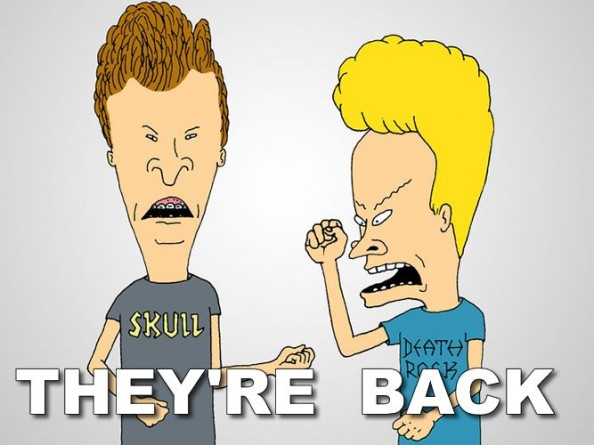 The MTV series that originally ran from 1993 until 1997 will have a much-expected revival next fall. Mike Judge, the creator of Beavis & Butthead is back on track and everyone’s curious to see what’s in store more than 10 years after.

The most idiotic characters of the 90’s pop culture have to adapt to nowadays’ reality and here’s a sneak peek of it, shown at the Comic-Con International 2011:

So am I the only one who thinks that something happened to Beavis’ voice? Sure, Mike Judge voices almost everyone in the series, but I can’t help saying that my favorite blonde douchebag in the universe fails to sound like he did in the old days. There’s a certain creakiness that he’s lacking and the only time I truly feel like I’m listening to the old Beavis is when he’s Cornholio.

Nevertheless, simply the facts that B&B are back and that Mike Judge gets to do something again, after the abrupt and unfair cancellation of King of the Hill, should make me happy enough already. I can’t wait to see one of the first episodes, already announced to be called “The Holy Cornholio” and I also can’t wait to hear Butthead’s insight on The Jersey Shore, a gathering of the few people on the planet with a lower intellect than him. It looks like soon enough my Beavis & Butthead t-shirts won’t be considered retro anymore.