Five Reasons Why You Will Love ‘Friends With Benefits’ 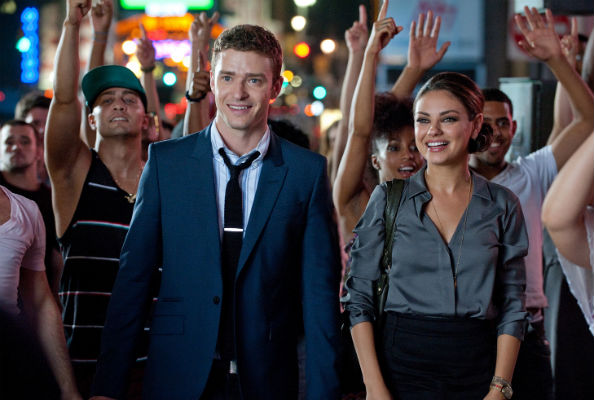 Photo by The Gate, from Imprint Online

I was anxious to see this movie, but I was also a little frightened. Mainly because my expectations were unusually high, after seeing the trailer and the awesome promotional campaign. I also saw Bridesmaids earlier this summer, with high hopes that it will be brilliant. I got disappointed instead.

But ‘Friends with Benefits’ was witty, fast-paced, cute and funny from the very beginning. Mila Kunis and Justin Timberlake make a great couple, the supporting characters bring colour to the movie and the dialogue is clever. For a romantic comedy it truly is a masterpiece. And here’s why you will love it too.

You fell in love with the characters in the first two or three minutes. The beginning is funny, colourful and hyperactive, setting the tone for the entire movie. We meet the two main characters, Jamie and Dylan, and we get to see them both getting dumped. Don’t worry – the break-ups aren’t heart-breaking, but fun to watch.

2. The chemistry between the characters

‘No Strings Attached’, released earlier this year and having basically the same plot, was OK, but ‘Friends with Benefits’ has a major plus – there is actually chemistry between Kunis and Timberlake. The two are extremely convincing as best friends, even after they decide to start having sex. The way they talk, they share text messages and make fun of each other stays fresh until the very end of the film. And this makes them convincing as a couple too.

I like him a lot, and even though he only has a supporting role here, he does a great job. He plays the role of a gay sports editor working at the same magazine as Dylan, and almost every scene he was in made me laugh. His voice is funny, his walk is funny, his outfits are funny – overall, Woody Harrelson manages to play an extremely amusing gay dude.

As NY Times critics said, ‘Friends with Benefits’ can easily be considered the ‘Scream’ of romantic comedies. It makes fun of clichés frequently used in romcoms and has the premise that everybody hates them, including the two main characters. Even from the beginning, Jamie is annoyed with Katherine Heigl – well known in the romantic comedy field. Also, Jamie and Dylan mock each other constantly, which adds an unique charm to their relationship.

‘Friends with Benefits’ is really funny, but it also has an emotional factor. We get to see Dylan trying to deal with his father’s disease, and Jamie trying not to judge her deranged mother. The relationship between the two characters also has its bumps, and their love story, realistic throughout the film, has an emotional ending. Which is a plus, because you leave the theater with a huge smile on your face.

Overall, the best comedy this summer had to offer so far, in my opinion. Did you see ‘Friends with Benefits’? What did you think of it?

Heidi Klum – the Most Dangerous Celebrity on the Internet | Mole Empire

[…] Mila Kunis chose to wear a simple black dress from Dior. What makes this dress interesting  is the asymmetrical shoulder strap and the apparent see-through material of the bustier. Just like all the other ladies that made it to this list she kept it simple wearing just a pair of diamond earrings and a ring as accessories. Even if the dress was quite simple she still managed to pull it off, being chosen as one of the best dressed women from the event. Kudos for Mila for making a smart choice. […]

I can’t wait to get my hands on this movie. Have been looking forward to it and now I have 5 good reasons to watch it 🙂

Enjoy Umar! Looking forward to hear some more reasons after you see the movie! 😉