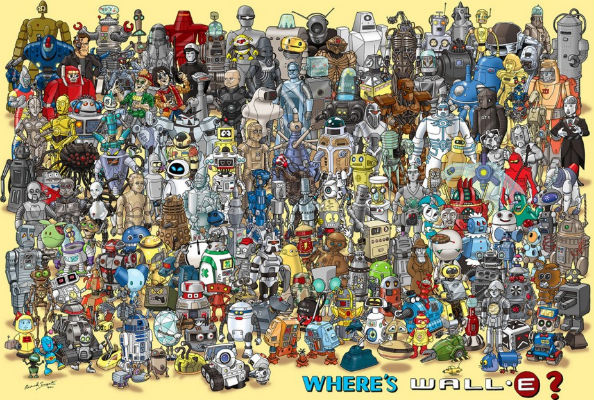 Well this is just lovely. Richard Sargent from Hopewell Studios created a poster that features almost every robot known to man, from both film and television series – 180, in total. And he invites to try and figure out where Pixar’s Wall-E is. Can you spot him? Click here for the illustration in a larger size.

Also, after you’ve found the puppy-eyed Wall-E, see how many featured robots you can name. Hopewell Studios is offering you the chance to win a signed version of the poster – just download this guide picture and send your answers to richard@hopewellstudios.com. Closing date for entries is August 31.

I have to admit I’m not such a huge Wall-E fan, but I had fun trying to spot him. And if you don’t like this modern version of ‘Where’s Waldo?‘, you can always exercise you attention with some classic illustrations.

[…] He has created a website for these little fellows that’s more like a foster home filled with robots waiting for people to take them. No, they aren’t small Terminators. Brian Marshall ensnared […]

Great post however , I was wanting to know if you could write a little more on this topic? I’d be very grateful if you could elaborate a little bit further. Many thanks!