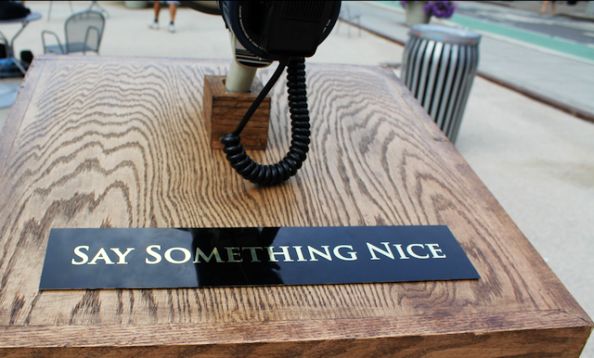 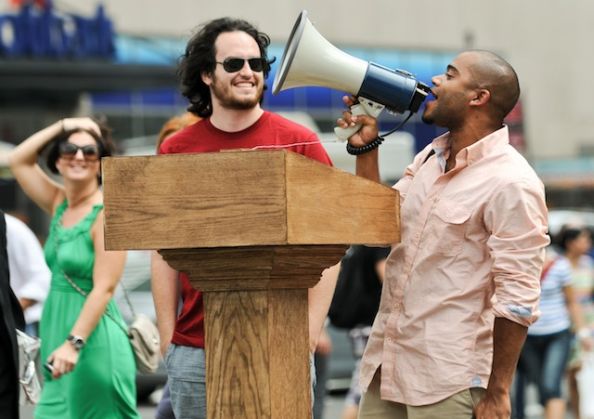 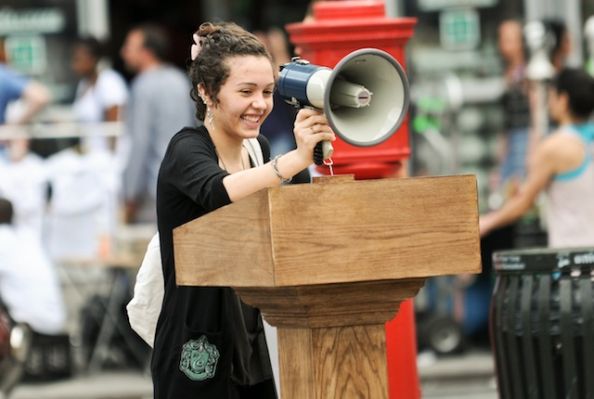 ‘Say Something Nice’ was a happening produced by Improv Everywhere as part of the Guggenheim Museum exhibition stillspotting nyc. New York city was selected for this project due its large density of people, extremely diverse cultures, hectic life and… noisy environment, mostly caused by the city’s crazy traffic, to which the sounds and noises produced by various gadgets such as mobile phones or music players add-up.

The stillspotting nyc project focuses on the relationship between space and sound, as well as trying to rise our awareness on the fact that we don’t say or listen to what we should listen. It’s pretty obvious that these crazy sounds affect our body, since our hearing tries to adapt to all these various noises, but that shouldn’t stop us from saying nice things to each other — after all, saying something nice never hurt anyone.

So next, a custom wooden lectern and a megaphone holster were placed and left alone in Union Square, quite a crowded place in New York. Not long after that people began to notice it, so after reading the ‘Say Something Nice’ sign, they went along and sent various messages. Most people said something nice such as ”Have a nice day!”, ”I love New York!” or more personalized thoughts such as “I love my friend here in the red shirt!”, some decided to share a musical message singing or playing the guitar (or both) and only a few decided to ignore the directions by saying something else, such as holding a Christian lecture or promoting a new event.

The project turned out the way it was expected: lots of nice words, lots of smiles and lots of happy people. All in all, this is a wonderful idea and I strongly believe it should be promoted in more cities around the world. It would be nice to see how people would react and what messages they would send.