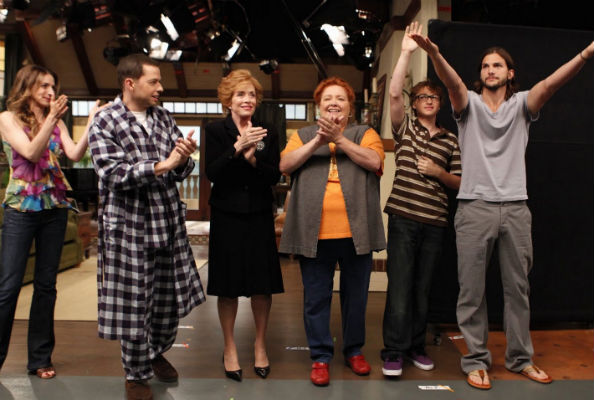 On the set of ‘Two And A Half Men’, photo from TV Series Lounge

There have been many rumors concerning the ninth season of ‘Two And A Half Men‘. With Charlie Sheen gone and Ashton Kutcher joining the cast there should be a lot of changes on the set of the infamous CBS comedy.

Actual footage from the new season hasn’t been released yet, but Ashton Kutcher, Jon Cryer and Angus T. Jones really want you to tune in Monday, Sept. 19. And here’s a video that has 10 reasons you should consider listening to them.

The gang appeared recently on ‘Late Show With David Letterman’, via satellite, from the set of the sitcom. Here are their 10 reasons. I guess they were all supposed to be funny, but half of the list is, sincerely, just plain boring. And the actors don’t really seem that excited.

What do you think? Are you looking forward to the new season of ‘Two And A Half Men’? Below you also have the official promo, which I actually think this is funnier than those 10 reasons. And don’t forget: it will all be revealed on September 9.