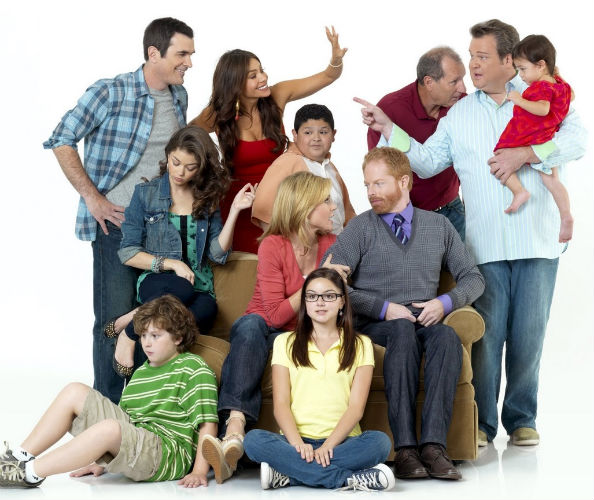 The Emmys happened on September 18, at the Nokia Theatre in Los Angeles, with Mad Men and Modern Family taking home the biggest awards of the evening: Outstanding Comedy Series and Outstanding Drama Series. Same as last year. And as far as Mad Men is concerned, same as the year before, and the year before that. I am not exaggerating. If they win next year also, they will set a new Emmy record. Four is the maximum number of Emmy wins for a show in the drama series category. Until now. You can find a full list of this year’s winners here.

Personally, I was a little disappointed with the 63rd Primetime Emmy Awards. I believe that Jane Lynch wasn’t that brilliant as a host and definitely didn’t measure up to Jimmy Fallon, who hosted the awards last year. Or to Neil Patrick Harris, who did a great job two years ago.

This being said, let’s get to the interesting part, listing the most exciting moments of the show. And then two not so good ones.

I was definitely intrigued when I saw him walk on the stage and kept expecting him to say something stupid. He didn’t. I can bet that he was ironic, but you have to give him some credit for his ‘performance’. Plus, he then handed an award to Jim Parsons, so that’s always a plus.

Gervais introduced the nominations for Outstanding Directing for a Comedy Series, via satellite. And although he wasn’t actually there, this was, in my opinion, one of the funniest moments from the entire broadcast. I adore his twisted sense of humor.

I think this was one of the most exciting and unexpected moments from the Emmys ceremony. As Rob Lowe and Sofia Vergara began to announce the list of category nominees, Amy Poehler took the stage, and her competition followed Melissa McCarthy, Martha Plimpton, Edie Falco, Tina Fey and Laura Linney. Unfortunately I couldn’t find a video that catches that moment, but you can see them all holding hands before the announcement of the winner, Melissa McCarthy, was made.

Another funny and unexpected moment was when Jimmy Fallon and Jimmy Kimmel, presenting the award for best supporting actress in a comedy, started wrestling on stage. Kimmel congratulates Fallon on his nomination, then asks if he wrote a speech. Fallon says he didn’t, because they all know Jon Stewart is going to win. Kimmel then tackles him to the ground and finds the prepared speech in his pocket. It contains “notes to self” such as crying on cue and holding the statue like it’s the “Lion King” baby. The video below doesn’t have sound unfortunately, but you can also see their performance here.

Pearce won the award for Outstanding Supporting Actor in a Miniseries or Movie. His acceptance speech was memorable. “It was really a delightful experience making Mildred Pierce, I got to have sex with Kate Winslet many many times (…) Kate, thank you for allowing me to insert myself into your world of Mildred, and to my wife Kate who had to listen to me talk about that every day when I came home from work,” he said.

Burrell’s acceptance speech was sincere, witty and humorous. He mentioned that his dad passed away before he had success and he wonders what he’d think of the fact he goes to work every day in full make-up.

I actually liked the Office spoof more that the musical opening act. It was a pre-recorded bit with stars talking about the worst part of their job which ended brilliantly with Ashton Kutcher playing dumb: “I was wondering where the half man was”.

Ok, and now the bad.

Although it had Leonard Nimoy, Jim Parsons, Jeremy Piven and Eric Dane in it, I found it disappointing. Just compare it to last year’s.

The ‘In Memoriam’ moment

The ‘In Memoriam’ moment is always touching, but picking some Canadian dudes to sing ‘Hallelujah’ during it turned out to be cheesy. I think it would have been better to have a moment of silence and then let the words of the ones that passed away speak for themselves. Don’t you agree?

What were your favorite and least favorite moments from the 2011 Emmys? And don’t forget to check if you were right about who the winners will be when the nominations were announced.