Apparently the whole Facebook madness will reach a whole new level with the first ‘social series’, ‘Aim High’, to be launched on the social network at the end of October. What exactly does that mean? Well, according to Warner Bros., the new series will be taking pictures, music and information from a viewer’s Facebook page and putting it in the video. Sounds odd, don’t you think?

‘By choosing to watch “Aim High” in a personalized viewing mode through the show’s Facebook page, viewers will be able to see themselves or their friends integrated into select scenes throughout the series – from their photo appearing on a student body election poster, to having their name seen as graffiti on the bathroom wall. This video application not only allows consumers to have an immersive and engaging viewing experience, but also a social one where they can share comments, scenes and Tweets about their favorite moments from the show.’ (source) 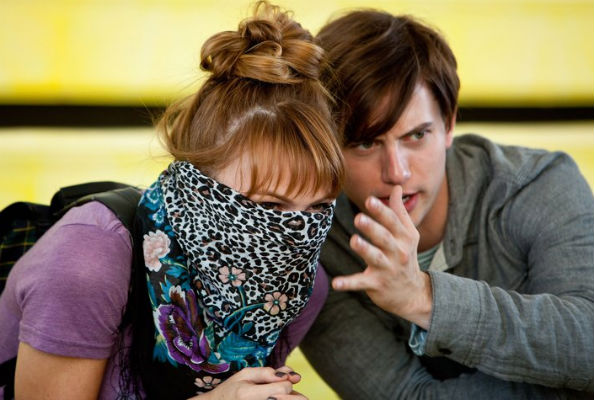 Nick and Amanda from ‘Aim High’, photo from the show’s Facebook page

The trailer looks exciting, and the series will star Jackson Rathbone (‘Twilight’) and Aimee Teegarden (‘Friday Night Lights’). Rathbone plays a young man leading a double life – juggling his studies by day and serving as a government operative by night. When he’s not handling international spies, Nick is dreaming of Amanda Miles, the most popular girl in school.

The idea of a ‘social series’ sounds good in theory, but I’m really curious if they will make it work. Do you find the promise of ‘an immersive and engaging viewing experience’ appealing or do you think the producers are taking it too far?

[…] The show was also a great launch for actors like Kyle Chandler, Connie Britton, Minka Kelly, Aimee Teegarden and Zach […]