Futurama tells the story of a dim witted Fry, a delivery boy from the year 2000 who due to his obvious smarts manages to get himself frozen for 1000 years. When defrosted, he meets Bender, a reckless alcoholic robot and a strong one eyed woman, Leela. They all work for a mad and senile professor who sends them in dangerous missions  for the delivery company. 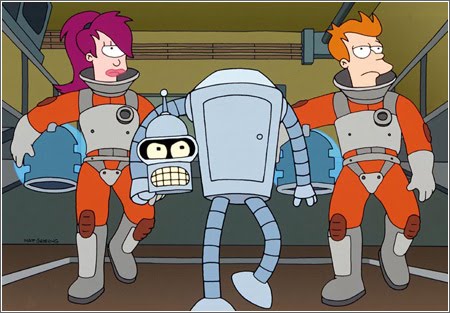 But besides delighting us with its plots and characters, the cartoon series has been a source of creative subtitles. In each and every episode’s trailer there was a very witty subtitle that described Matt Groening and David X’s sitcom. Some are related to the real life events that influenced the streaming of the episodes (See you on some other channel, Rebirth, Reincarnation were all related to the fact that the sitcom was moved from FOX to Comedy Central) while others are just plain funny and (Bigfoot’s choice, Beats a hard kick in the face, We’re following you, but not on Twitter).

The video below shows the first four season’s subtitles who are equally entertaining.

Known to cause insanity to laboratory mice

Disclaimer: Any Resemblance to Actual Robots would be really cool

Soon to be a major religion

A by-product of the TV industry

Beats a hard kick in the face

Too hot for radio

Controlling you through a chip in your butt since 1999

See you on some other channel

Apply directly to the eyes

There will be a test

Dictated but not read

If you don’t Watch it, someone else will

Two scoops of pixels in every scene

#1 most viewed show among viewbots

For the sophisticated shut-in

Penetrates even the thickest foil hat

The one bright spot in your life

Soon to be a hit television show

With all this being written there is just one more thing left to settle: do you like these subtitles? Which and why? Or do you simply think they’re gibberish and annoying?