Memorable Moments From the 2012 Golden Globes 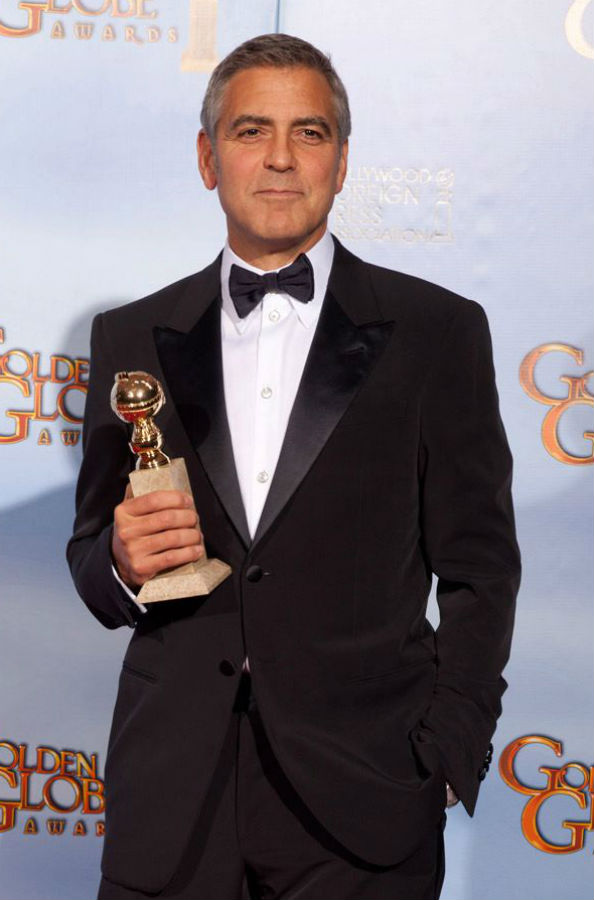 In spite of some predictable results (apparently it’s now absolutely necessary for us to watch a silent movie in 2012) and a suspiciously absent Ricky Gervais, there were some moments at the 2012 Golden Globes that are worth mentioning.

From a talented dog to a funny introduction and a classic photobomb, here are 10 memorable moments from the 2012 Golden Globes.

Altough the host of the 2012 Golden Globes didn’t manage to score a lot of screen time and was far less shocking than last year, Gervais was his usual charming self. Here’s his amusing opening monologue.

Gervais puts Depp on the spot

‘The Tourist‘ was for many of the film critics out there a disappointment, and Gervais wasn’t kind when introducing Johnny Depp, the night’s first presenter, on stage.  ‘Have you seen The Tourist yet?‘ – that is what we call a hilariously inappropriate question. At least Depp proved he knows how to take a joke.

This was one of my favorite moments from the 2012 Golden Globes. The couple’s funny tune for introducing the nominees for Supporting Actress in a TV Series, Movie or Miniseries Category ended so perfectly – ‘It’s an honour to be nominated blah blah blah blah blah blah blah‘. You can see them in action here.

Kate Beckinsale did look really hot at the 2012 Golden Globes, and Seth Rogen was there to shock us with too much information about himself. ‘Hello, my name is Seth Rogen, and I am currently trying to conceal a massive erection‘, Rogen said before presenting the nominees for Best Actress in a Musical or Comedy. Oh no he didn’t!

Octavia Spencer and her emotional speech

I was extremely happy for Spencer, who did an absolutely amazing job on ‘The Help‘. She won Best Supporting Actress in a Motion Picture and gave a truly emotional speech, proving she has a wonderful sense of humour.

Freeman received the Cecil B. DeMille Award at the 2012 Golden Globes, and the career montage was a great reminder that he has played everything from a slave to the presidents to Nelson Mandela to God.

‘It’s been said if you do what you love, you’ll never a work a day in your life, and if that’s the case, for the past 45 years or so, I’ve never had to work, because my passion in life has always been acting‘, Freeman said in his soothing, perfect voice. 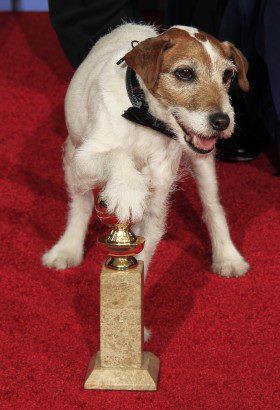 When the cast and crew of ‘The Artist’ took the stage to celebrate their win for Best Motion Picture Comedy or Musical, the film’s canine star, Uggie, was the center of atention, in spite of producer Thomas Langmann’s touching speech. It’s actually good that ‘War Horse’ didn’t win anything – I’m guessing that a horse on stage wouldn’t have been so pleasing. Below you can see Uggie in action.

During the presentation for Best Actress in a Television Series – Comedy or Musical, Tina Fey photobombed the nominee shot of Amy Poehler. Fey and Poehler were both up for the award, but lost to Laura Dern.

Jimmy Fallon and Adam Levine proved to be an inspired pair, and Fallon goofed on Levine’s hit ‘Moves like Jagger’. His little dance was pretty funny. Click here to check it out.

You can find a complete list of 2012 Golden Globes winners list here. Did you enjoy the show? Sound off in the comments!

Photos from the Golden Globes Facebook page and Tumblr

[…] wonder about the dresses that will appear on the red carpet. On January 15 took place the 69th Annual Golden Globe Awards and most of the Hollywood actresses – but not only, gathered again on the red carpet […]