Best Dresses from the 2012 Golden Globes

Every year when movie-awards events approach, while actors wonder if they’re going to win any awards, the public and journalists wonder about the dresses that will appear on the red carpet. On January 15 took place the 69th Annual Golden Globe Awards and most of the Hollywood actresses – but not only, gathered again on the red carpet competing for the „best dressed” title. The competition is always tight and this year it was no exception. These ladies had the “help” of many famous designers but winners were just a few among who we can mention: Versace, Dior, Gucci, Zac Posen, Elie Saab, Roberto Cavalli, Vera Wang, Lanvin and newcomer Maria Lucia Hohan.

As always, Angelina doesn’t seize to amaze us. She looked stunning this year at the Golden Globes, wearing an Atelier Versace satin dress matched with a bright red Christian Louboutin clutch. The dress looked as if it was literally painted on her. Indeed she knows how to wear a sophisticated dress: choosing to wear her hair up in an elegant bun, wearing few  pieces of jewelry and red lipstick and knowing how to pose – the details say it all. There is no doubt that the Jolie-Pitt couple was the best dressed from the event. 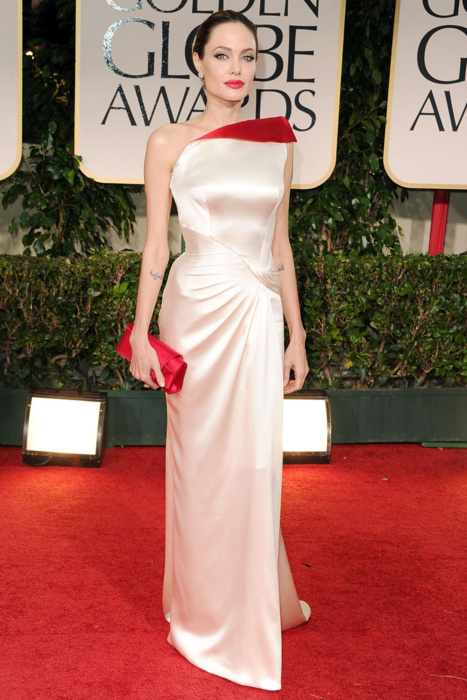 Emma wore a simple but gorgeous Lanvin dress in shades of red with a golden eagle belt buckle. The dress looked pretty amazing on its own and that’s why I believe that the tigh-high cut wasn’t quite necessary but that didn’t make the dress less beautiful. The Lanvin dress was also suitable for her age and besides that Emma’s hairstyle and makeup went perfectly with it. All in all she was a wonderful appearance on the red carpet. 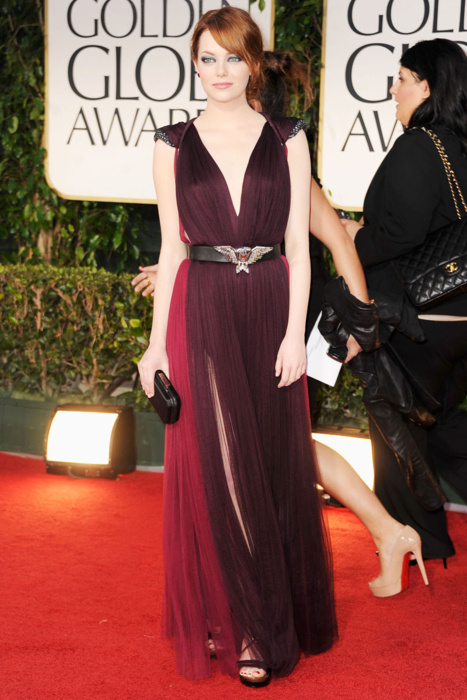 Charlize wore a splendid Dior Couture dress with a high split on the left side and a pretty long train but the most attractive element of her dress was the huge bow around her waist. She also wore Cartier jewelry and Givenchy shoes with a really thin and tall high-heel, to match her princess look. I think that the only downside to her outfit is the tiara she’s wearing because it somehow attracts more attention than the dress. Nevertheless, I don’t know how she does it, but she always looks incredibly feminine and classy. 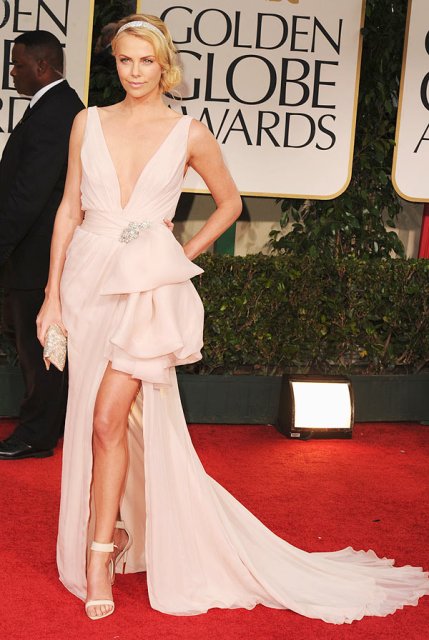 Reese was dazzling in her Zac Posen scarlet dress. The dress she wore was generally considered one of the most beautiful from this year’s Golden Globes and for good reason. Its simplicity makes it elegant and its bold color gives it a sophisticated aspect. I really liked the fact that she wore just a bracelet as an accessory because as they say, less is more. This was a great choice for Reese, she looked really glamorous. 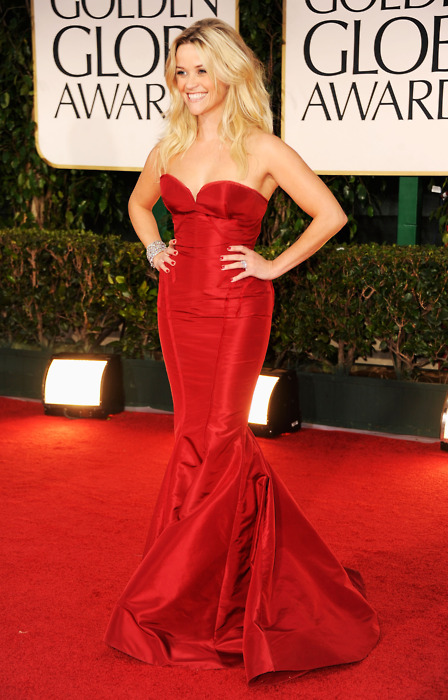 Photo from IyaAlaso on Tumblr

Jessica was also a beautiful presence on the red carpet this year. We already know that she has a great taste in fashion when it comes to her daily outfits but I’m sure we’re all waiting to see what she chooses to wear on the red carpet. Once again she looked wonderful in a lilac Gucci dress with silver glittery embellishment. She looked so good that you wouldn’t even say that she’s the mother of two kids – her perfect figure doesn’t show it but she does look really happy. I guess we can all envy her for that. 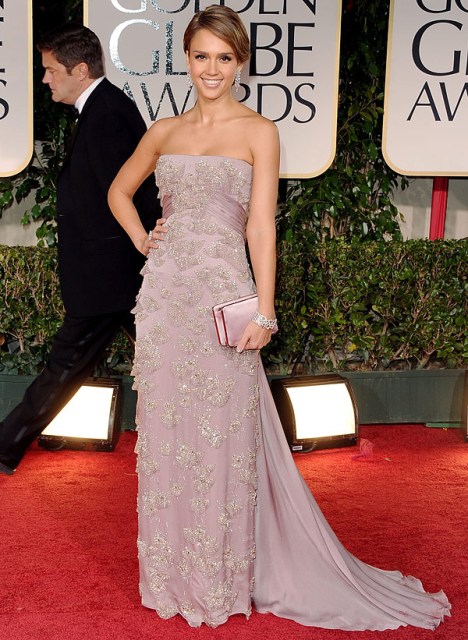 Photo from TheHRevolution  on Tumblr

Jenna was a stunning presence on the Golden Globe’s red carpet not because of her emerald eyes – because they always stand out – but because of the gorgeous dress she wore in a color similar to her eyes. This romantic-looking dress reminded me of Zuhair Murad‘s creations but this one is actually designed by Romanian designer Maria Lucia Hohan. I also believe that it’s worth pointing out that it was a great choice matching the emerald dress with a pair of purple earrings signed Irene Neuwirth. She looked really classy and feminine so she deserves to be on the “best dressed” list. 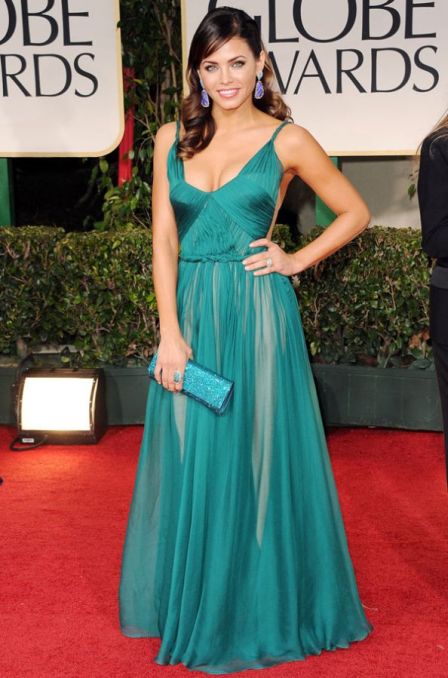 Photo from BaconIsBetterThanLove  on Tumblr

Nicole Kidman doesn’t seem to age. That’s a fact. She looked amazing at this year’s Golden Globe Awards, wearing a beige Versace dress with golden metallic studded details that showed off her perfect figure. The dress looked as if it was designed especially for her and no one else. As for accessories, she matched her dress with a golden Roger Vivier clutch and Fred Leighton jewelry. The golden studs on her dress actually have the same color as her hair, matching perfectly. Thumbs up for Nicole. 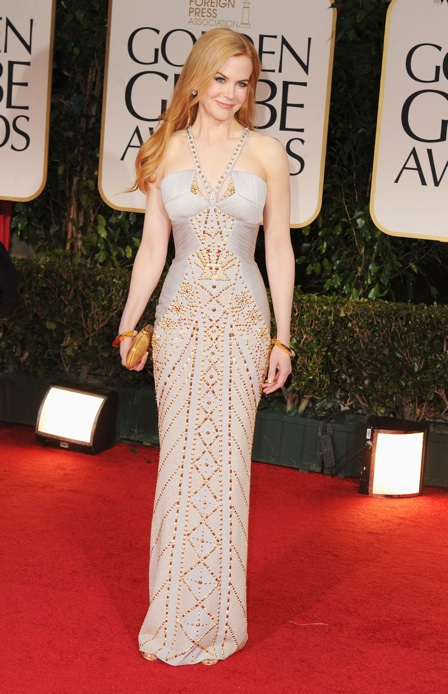 Photo from AvasThings  on Tumblr

Actress Bérénice Bejo (from the movie The Artist that won 3 Golden Globe Awards ) wore a wonderful strapless Gucci dress in cobalt blue. The color was absolutely gorgeous which definitely helped her stand out at the event. Accessories were few and simple but with a touch of glam: Chopard earrings and bracelet and a dark-blue sparkly Swarowsky clutch. 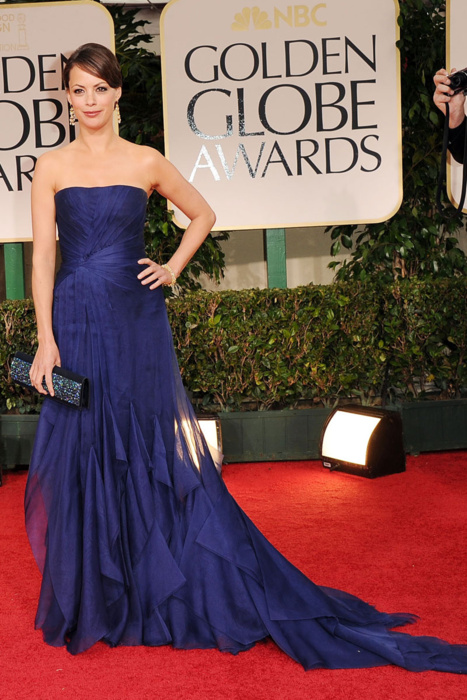 Salma Hayek, just like Nicole Kidman, doesn’t seem to age either. She looks as beautiful and young as ever.  The dress fits her perfectly and it shows off her voluptuous curves. Black and gold are always a perfect combination for special events and this time Salma made a perfect choice especially since this art-deco dress has a touch of glam – the sparkles on the skirt and the metallic embellishment on the bustier – which immediately draw attention. Her look was completed by a black satin Gucci clutch and a pair of golden chandelier earrings. 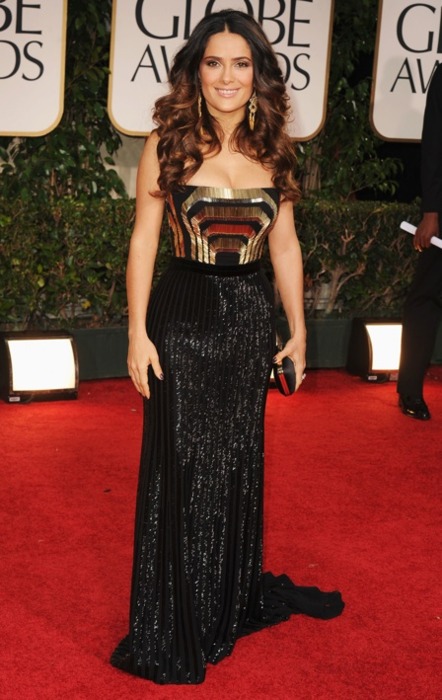 Photo from AvasThings on Tumblr

Kate Beckinsale has always been a beautiful, sophisticated and classy woman and she never goes wrong no matter what she chooses to wear. She could still look gorgeous even in a potato sack. For the Golden Globe awards she chose a cream-beige dress from Roberto Cavalli, once again strapless, like many other actresses this year, with sparkly embellishment. The dress gives her a wonderful mermaid look, highlighting her feminine curves. As for accessories she wore three diamond bracelets and over sized earrings. I have no other words than: gorgeous. 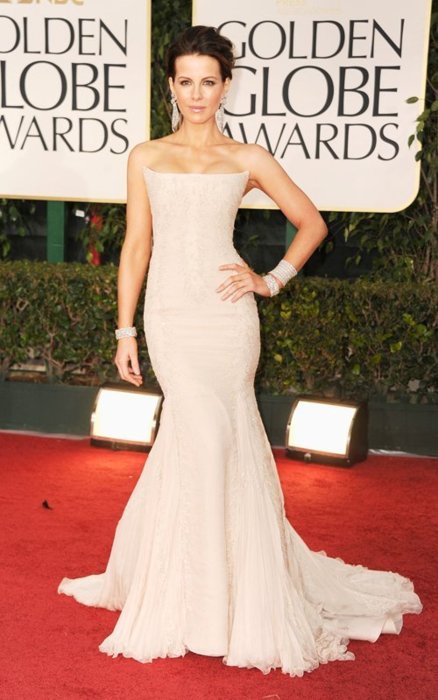 Photo from Frisskkky on Tumblr

Sofia wore a gorgeous navy-blue strapless dress by Vera Wang with a train that looks like sea waves at night. Her look was glammed up with a set of diamond Harry Winston bracelets and long earrings. The dress was classy and it was a great choice for her voluptuous forms. 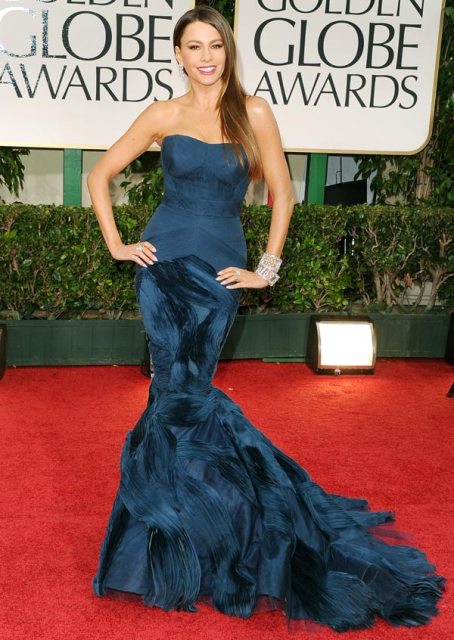 Mila Kunis chose to wear a simple black dress from Dior. What makes this dress interesting  is the asymmetrical shoulder strap and the apparent see-through material of the bustier. Just like all the other ladies that made it to this list she kept it simple wearing just a pair of diamond earrings and a ring as accessories. Even if the dress was quite simple she still managed to pull it off, being chosen as one of the best dressed women from the event. Kudos for Mila for making a smart choice. 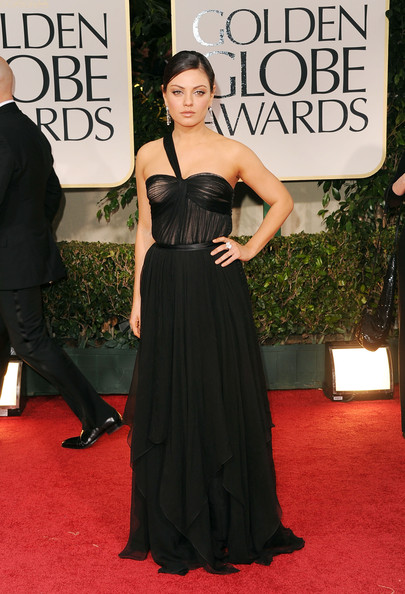 Photo from NoveltyRubberStamping on Tumblr

As every year there were the “best dressed” and the “worst dressed” but I’m not going to mention the unlucky winners. It seems that the actresses that managed to make it to the good list followed the famous saying “less is more” choosing simple hairstyles, simple makeup and simple accessories. That way they can never fail when it comes to their looks. They have class and they have style and that always keeps them in the spotlight.

[…] a simple question: What movie made you cry? A lot of celebrities answered, including James Franco, Mila Kunis, Colin Firth, Javier Bardem and Julianne […]

[…] with elegant and sophisticated outfits, and although the celebs weren’t as glamorous as they were at the 2012 Golden Globes, we still saw some amazing fashion […]