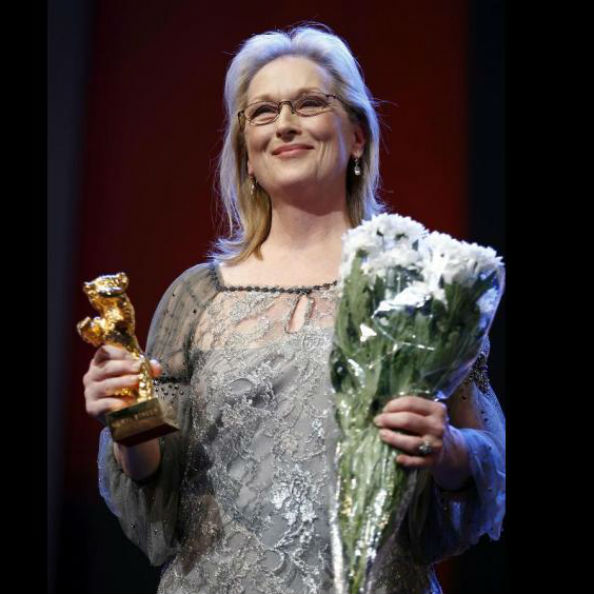 Meryl Streep was honoured with the Golden Bear Lifetime Achievement award at the 62nd Berlin Film Festival earlier this week. She was given the Golden Bear at the special screening of ‘The Iron Lady‘, for which she is also expected to bag her third Academy Award.

‘The only reason I’m here tonight, truthfully, is because of the inspired artistry of people that I’ve worked with […] and I will never forget how grateful I am to them’, a modest and emotional Streep said in her acceptance speech.

The veteran Hollywood leading lady has had an amazing career – that is why it is actually difficult to narrow it down to a list of only 10 great performances. But we did our best.

A just divorced man must learn to care for his son on his own, and then must fight in court to keep custody of him. Streep portrays Joanna Kramer, a role which earned her the first of her two Academy Awards.

Sophie is the survivor of Nazi concentration camps who has found a reason to live with Nathan, a sparkling if unsteady American Jew obsessed with the Holocaust. They befriend Stingo, the movie’s narrator, a young American writer new to New York City. But the happiness of Sophie and Nathan is endangered by her ghosts and his obsessions. Streep gives an unforgettable performance, which also brought her the Academy Award for Best Actress.

On November 13, 1974, Karen Silkwood, an employee of a nuclear facility, left to meet with a reporter from the New York Times. She never got there. The movie follows the story of a metallurgy worker at a plutonium processing plant who was purposefully contaminated, psychologically tortured and possibly murdered to prevent her from exposing blatant worker safety violations at the plant.

Francesca Johnson in The Bridges of Madison County (1995)

Photographer Robert Kincaid wanders into the life of housewife Francesca Johnson, for four days in the 1960s. Streep stars alongside Clint Eastwood in one of the most passionate love stories of our times.

A lovelorn screenwriter turns to his less talented twin brother for help when his efforts to adapt a non-fiction book go nowhere. Streep plays Susan Orlean and gives an incredible performance. I consider it one of the most appealing comedic portrayals of all time.

Ethel Rosenberg in Angels in America (2003)

In this miniseries, Tony Kushner adapts his political epic about the AIDS crisis during the mid-eighties, around a group of separate but connected individuals. Streep won the Emmy and the Golden Globe for her work in this adaptation.

A look at what goes on backstage during the last broadcast of America’s most celebrated radio show, where singing cowboys Dusty and Lefty, a country music siren, and a host of others hold court.

A naive young woman comes to New York and scores a job as the assistant to one of the city’s biggest magazine editors, the cynical Miranda Priestly. Streep gives yet again a memorable performance as the ruthless Runway editor.

Having to play an iconic person like Julia Child is a hard task to take on, but Meryl did it amazingly. Julia Child’s story of her start in the cooking profession is intertwined with blogger Julie Powell’s 2002 challenge to cook all the recipes in Child’s first book.

Margaret Thatcher in The Iron lady (2011)

A look at the life of Margaret Thatcher, the former Prime Minister of the United Kingdom, with a focus on the price she paid for power. And a role which will most probably score her another Academy Award.

What is your favorite Meryl Streep performance off all time? Do you think she will win her third Oscar with The Iron Lady? Hit the comments and let us know!

[…] Meryl Streep won her third Oscar at the 2012 Academy Awards. This was her 17th nomination. Also, Christopher Plummer is Best actor in a supporting role, being the oldest actor to ever win an Oscar, at 82. You’re only two years older than me darling, where have you been all my life?, the talented actor asked the shiny statuette. Nice opener. […]