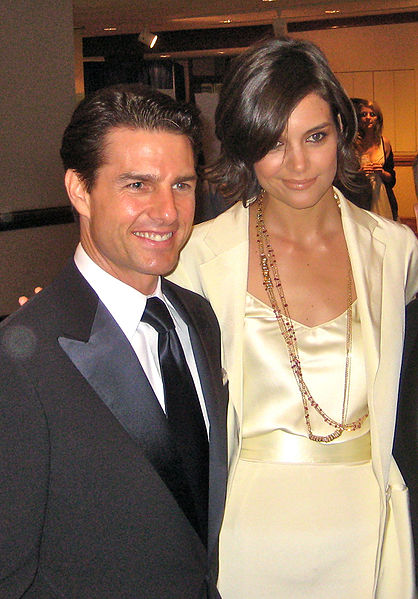 The Scientological tragedy has just climaxed with Tom Cruise’s divorce from Katie Holmes. Or actually the other way around. The Dawson’s Creek star was the one to file for divorce because, among other things, she was made to give birth quietly. The only problem is that she only realized that she was subdued after no less than 6 years. This is what Scientology can do to you. But better late than never.

Moreover, it seems that Tom Cruise never shared the placenta dish with Katie. If you didn’t know by now, the placenta is allegedly extremely rich in nutrients that basically keeps your skin from wrinkling. Now I’m not saying that Mrs. Holmes is ugly or that Tom Cruise has preserved his body intact at the age of 50 – even though you’re free to contradict me. I’m just saying that these invaluable sources of beautifying should be shared, especially within the altered scientological sanctity of marriage.

Their only child’s name is Suri, which has various meanings invented by Tom Cruise, technically unacknowledged by Hewbrew linguists. The name is supposed to signify, besides other meanings,  “princess”, “priceless”, “rose” or some other stigmatic label. And for instance, in Japanese it means “pickpocket“, which seems quite eloquent if you’re born in a family who believe that extraterrestrial souls attached themselves to human beings and this is how humans as we know them have been created. Which is actually fun! This is why it is only fitting that somebody like Tom Cruise should be taken in by such a doctrine.

Now one of Cruise’s main problems is that Mrs. Holmes is seeking sole custody of the child. It’s easy to assume that this is even a moral issue that might concern more than the couple. So who should the child stay with? Obviously, it’s a very difficult question to answer. Should the little girl remain with her father, who’s got 22 years of scientological experience or with her mother, who’s only been taken in by the dogma 7 years ago? You do the math!

Photo by Jay Tamboli from Wikipedia