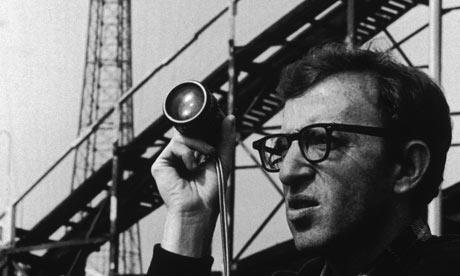 When Woody Allen stopped making films, people simply didn’t realize it. They thought he continued to direct. They thought he actually went on creating new stuff. On one hand, he did retire in a way from film making, because what people didn’t know was that he had and has been working for National Geographic since 2008. I mean, he must have been. How else could you justify films like Vicky Cristina Barcelona, Midnight in Paris or To Rome with Love?

The esthetic dimension has been giving way to the travel guide genre for more than 4 years now. Rediscovering Europe seems to be his rediscovered fetish. Paris, Rome, Barcelona. After he exhausts Western Europe with its poorest sister Portugal, he’d have to discover the more exotic Eastern Europe where people are a little more primitive, but exquisitely charming at the same time! Of course, Woody Allen wouldn’t call the genre by its name because he saw the audience was somewhat gullible. So the circumstantial pact between creator and receptor was truly advantageous: earning some money to make ends meet as a senior citizen without making the slightest effort to actually create art.

What’s more, he even stopped working with real actors. He hired a few pretty well-known paid mercenaries to make whole movies. Owen Wilson, Rachel McAdams (in Midnight in Paris) or Alec Baldwin (in To Rome with Love) – everybody knows they are nonexistent as actors or as artists, as they say. But they definitely were a lot cheaper so it was mutually beneficial. He even used Carla Bruni, who had played only in one other movie, the 1998 Paparazzi. All right, it’s probably not the first time he’s ever used Hollywood second-rate merchandise, but his personality had always been conspicuous enough to overshadow any bad acting from their part.

There have been a lot of discussions regarding his ups and downs of his recent films – and you know that Woody Allen’s recent films means 10-12, that’s how prolific he is. At some point, movie critics (that is to say people who have an opinion on the internet) unanimously agreed with the fact that Woody Allen went downhill, but then, all of sudden “realized” that he got back on track with movies such as Whatever Works or Midnight in Paris. Well, he actually didn’t go back on track. It’s just the same crap all over again.

Whatever Works stars Larry David, yes, a very respectful comedian, who tries to play the original Woody Allen, you know, the Manhattan one, the highly intellectual adult in a relationship with a quasi-pubescent girl. Well, Whatever doesn’t work. Only Woody Allen playing Woody Allen worked. Not whoever. And that’s the fundamental problem with his new films. Indeed, almost all his classic films used the plot as a pretext to put forth his charming, philosophical, eternally vivid ideas, and this is why there was a sense of repetition from one movie to another. But that never bothered you too much, as long as you saw Woody Allen acting, always in the center of things. He himself made the whole difference.

Yes, I admit there are exceptions even in this recent period – one of which is Match Point (2005), which stands out from his filmography just like Interiors (1987), a homage to Bergman. I could add to this even Anything Else, in which he makes even the American Pie guy look decent from the point of view of acting. The trend, however, is rather obvious. As time goes by it stubbornly descends.

But then again, why should it be different? He’s already said everything he wanted to say by now. Woody Allen rests his ass on a huge legacy. He obviously doesn’t need to prove anything now. He’s done his job. Unlike Scorsese or Christopher Nolan (who I remind you, directed The Dark Knight), he did stay true to himself. But just like them, his films have become commercial refuse. That’s why, out of a pathetic (<pathos) nostalgia drive, I’ll try to remember Woody Allen for his Annie Hall, Zelig or even his captivating What’s up, Tiger Lily?.

[…] or Take the money and run, the designer establishes an emotional connection with the fans of Woody Allen movies, by remembering the beauty of these movies. And for those disappointed fans disputing his films […]