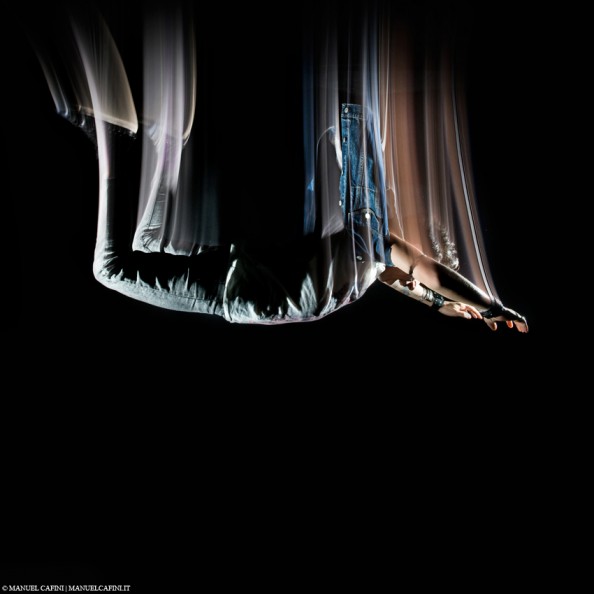 An engineer turned photographer “by chance”, Italian photographer Manuel Cafini manages to harmoniously combine the technical aspects of photography with the perception and sensitivity of an artist. Entirely self-taught, he has found his visual voice as he’s exploring the art of motion in his works.

My engineering background was vital to my success, because it allowed me to turn my ideas into something real. Generally, it’s not enough to have a stroke of genius, but it’s necessary to be able to get it to the point. When you are able to move your ideas into concreteness, everything is much easier!

In some sense, I feel like I am two persons at the same time, both living in my body. There is a part of me that has insights, while the other knows to how realize those ideas through technical knowledge.

In essence, I have been able to take advantage of the two opposite sides of my personality: the technical one – sometimes too much technical and sometimes even maniacal, too, and the oversensitive one, which has emerged due to a series of events that have changed my life drastically. They are aspects of me that can result negative if considered one by one, but if they are joined harmoniously, they let me obtain good results.

Focused on capturing the process of motion, Manuel has developed an original technique through which he manages to express the beauty of the action rather than the static aspect of an image. Mostly working with dancers and artists, he’s more interested in the process itself and how it evolves. As for the technique itself, Manuel prefers to keep it undisclosed. I think that keeping a certain mystery to it makes his works even more captivating.

Since I was a child, I’ve been attracted by dynamism . To me, photography is movement. Looking at a static photograph I’ve the impression that it lacks something, as if the photo is not complete.

My primary goal is to project  some seconds full of strength and passion on the sensor. A photograph of mine seems a shooting of the development of an action concentrated in a picture. How can I do that? This piece of info is of the greatest secrecy. Just know that my models must sign a document that restrains them from talking about the shooting.

This technique allows me to obtain a static picture and then put it in an absolutely dynamic background, even if it is completely plunged into the light. I think that this discovery it’s special and unique, and that’s why I would like to protect it as much as I can, instead of sharing it with others.

I’ve been able to get the same results even without any additional flash. It has been a great success to me! And when I say “Same results” I mean also the stroboscopic effect without any flash, everything in continuous light! This allows me to get the same result in every theater, during any kind of show (maybe with a little digital noise, as I am forced to use slightly higher ISO settings). Using this technique for international artists during any kind of performance. It’s a great satisfaction – both for me and for the artists, too. Moreover, I can take pictures of moving dancers at their best moments of expressiveness and technique. The result will be even more natural than what you can get in a studio. For this reason, I keep it top secret. 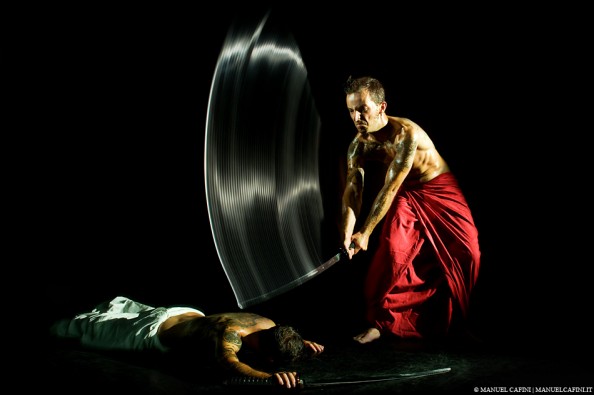 Combining technical knowledge with art, Manuel confesses that through motion photography he has managed to express the two sides of his personality and give a meaning to his work. Technicalities help when putting ideas into practice, but photography has widened his horizons and opened his eyes to see the world in a explore it with a different perception.

I have spent the first 25 years of my life wearing blinkers..do you know racehorses?! Well, I was trapped in a schematic world that didn’t allow me to live thoroughly. Then a series of unpleasant events and a deep depression have made me oversensitive and I’ve felt a growing need to express my emotions. Throughout photography every mental pattern has gone away and let space to a wider and more flexible vision of the world around me. I’ve finally caught a balance between my two “selves” that makes me complete. It seems that I’m living a second life, a life with more freedom but with a heavy technical luggage that helps me turn my ideas into something concrete.

Manuel’s authentic style has been exploring the art of motion, but all of his works are different in the sense that he’s always experimenting with new techniques. Even now he’s trying out a techniques called “Motion Photography 360”.

A sharp eye can easily notice that most of my photographs, even if they belong to the same series, are different from each other. This happens because I use different techniques: therefore, there is an evolution – or better: an uniform evolution. I’d like to take the opportunity here to announce that at the moment I’m trying out a new technique that I’ve  called”Motion Photography 360°”. Thanks to the first test that I’ve carried out, it looks very promising! 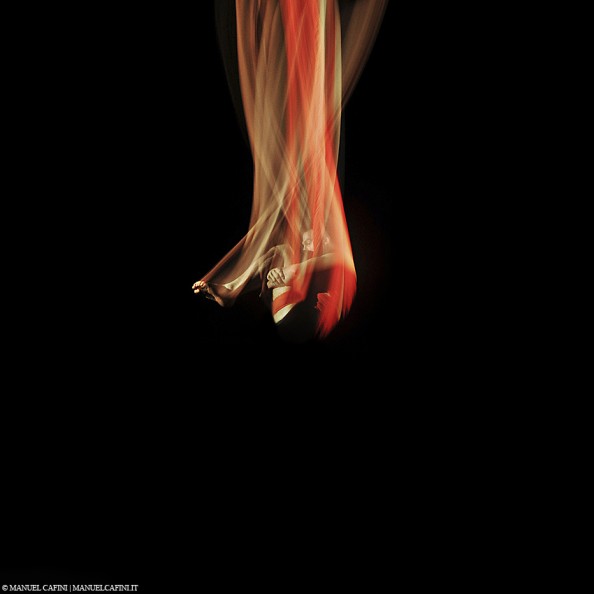 Being the official photographer for a theater, he easily has access to artists and professional dancers or ballerinas with whom he established fruitful collaborations. The artist is not limiting his subjects only to dancers, he’s open in cooperating with artists of other disciplines as well.

I live in a town where there is a keen interest in dancing and a lot of international artists come to perform in the main theater where I am the official photographer. Often good relations start and therefore we exchange good turns with each other. However I work together with artists of different disciplines too.

Since he is entirely self-taught, Manuel considers imagination a major part in him forming and developing himself as a professional photographer, because as Einstein said: “Knowledge is nothing without imagination.” Contrary to the common habit of being inspired by other artists, Manuel is rather an observer than a follower when it comes to his own composition.

I observe perseveringly and every day I develop a “reverse engineering” of hundred of photos by artists of every kind. 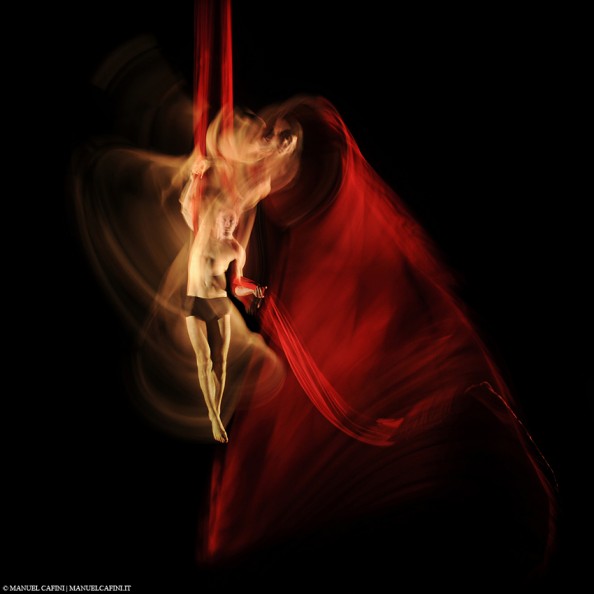 The photographer’s ingenuity proves that even when you have gear that is poor in terms of performance, with a little imagination and creativity you can still have great photos. Seeing beyond the limitations of the equipment and thinking outside the box is one of the things that you can do as an artist.

When I started my career, my first camera was a Nikon d200, which is famous for its poor performance with high ISO. If you think that my first relevant job was to cover a very important dance review – where the light is usually very low, you can easily imagine my initial frustration. But somehow, I have to thank that camera bearing so much obvious defects and its use in such a dark place, if I’ve reached such a good level so far. I’ve tried to exploit the bad qualities of this camera to my benefit… using a little bit of brain! I still remember that in that review I’ve never used pose time faster than 1/40.

I used to attend many rehearsals of the shows and take the time with a chronometer from the beginning of the rehearsals. I would note down on my Moleskine the exact minute and second when, with a long time exposure of the shutter, I could make the difference and obtain particular shots using Panning, Burst Zoom and other techniques.

Using this “trick”, during the show I already knew the exact moment when to shot. The result was that, when the theater manager saw the pictures, he literally jumped off his chair.

This is just to say that how you use a camera is far more important than its mere good or bad quality.

Eventually, I’ve switched anyway to a Nikon d700 and, I must admit, there has been a great leap forward in the quality of both the camera and the pictures.

Manuel’s message for other photographers is simple but quite powerful.

Enjoy some selections of Manuel’s work below and for more check out his Facebook page or 1x profile. 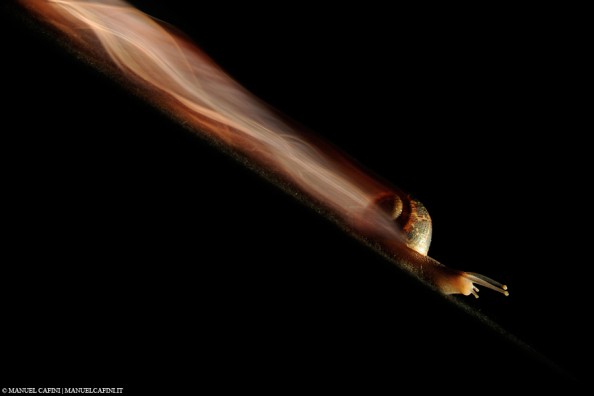 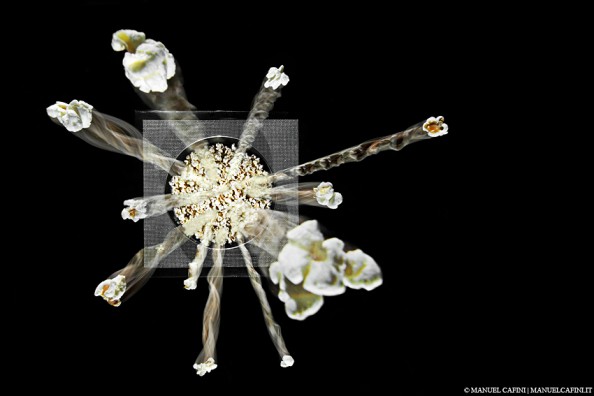 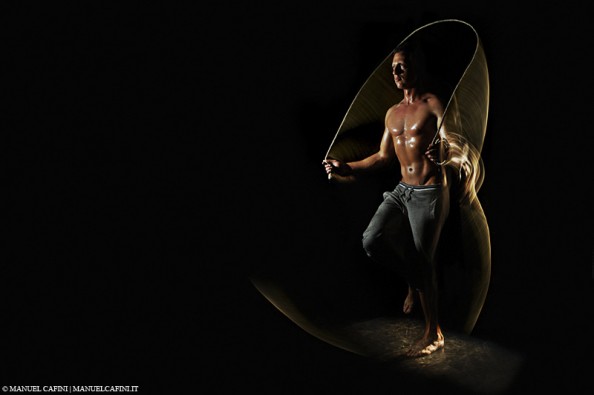 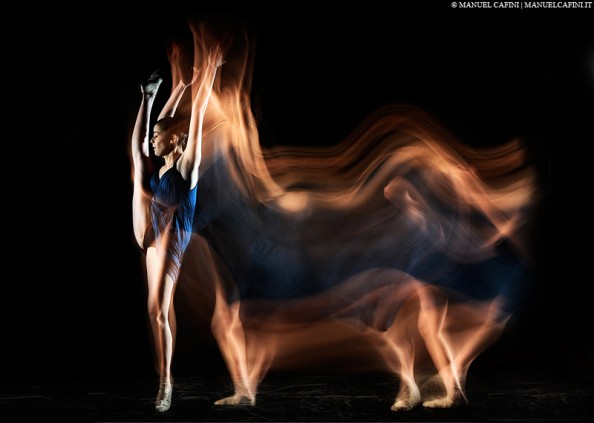 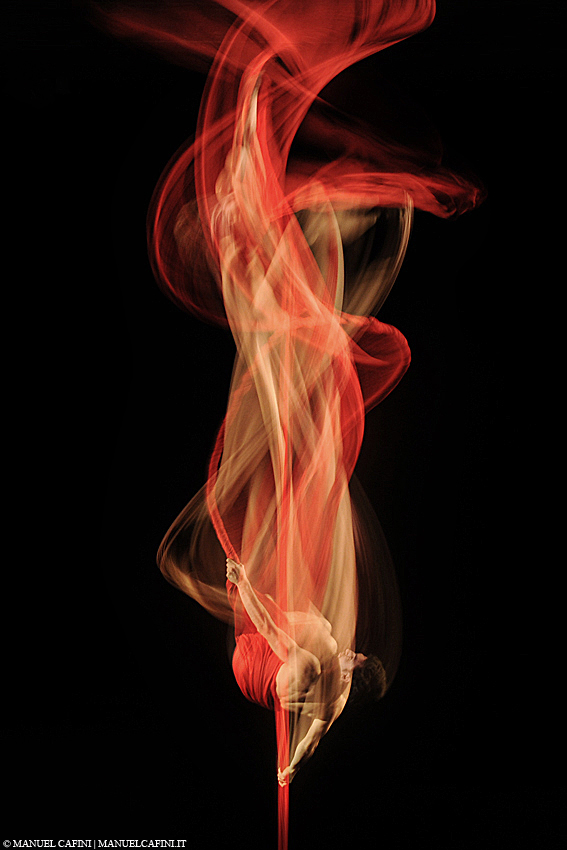 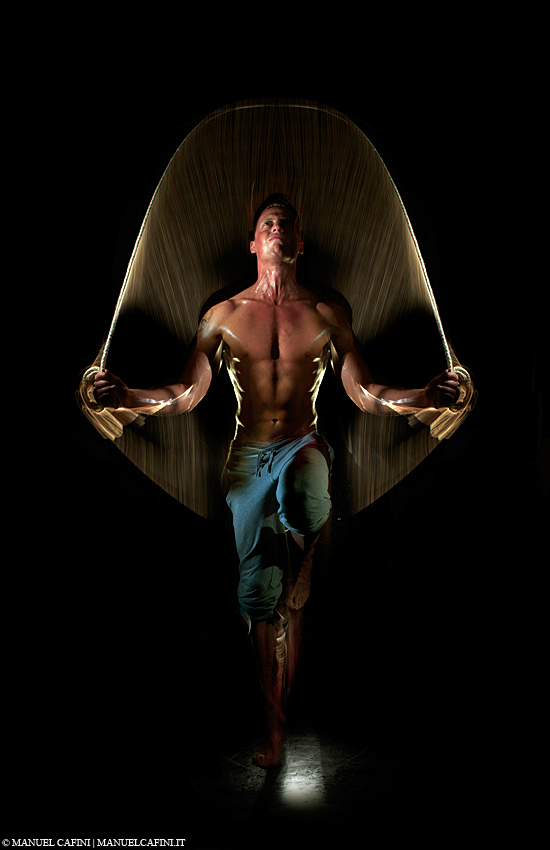 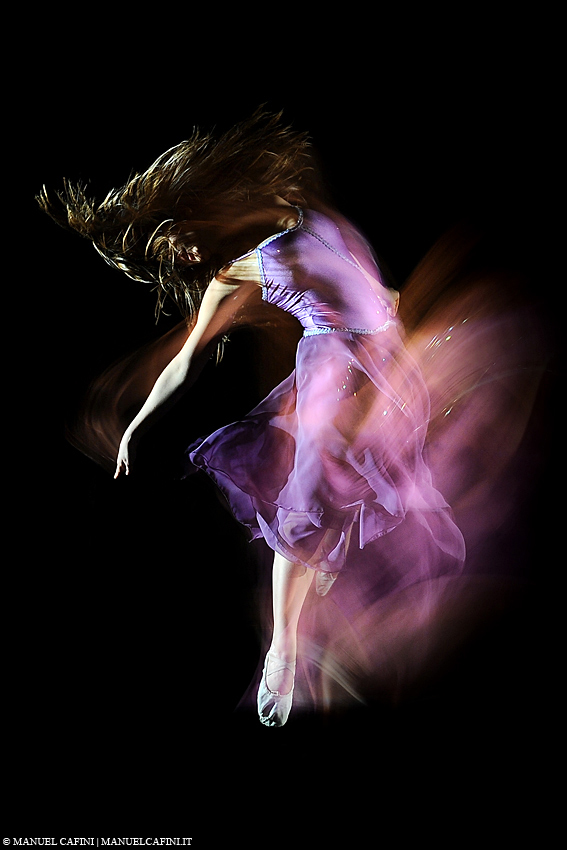 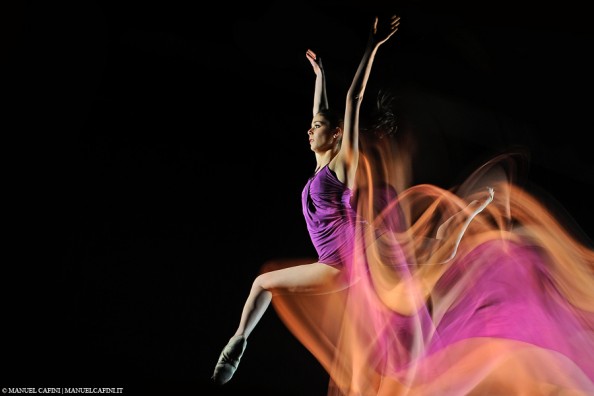 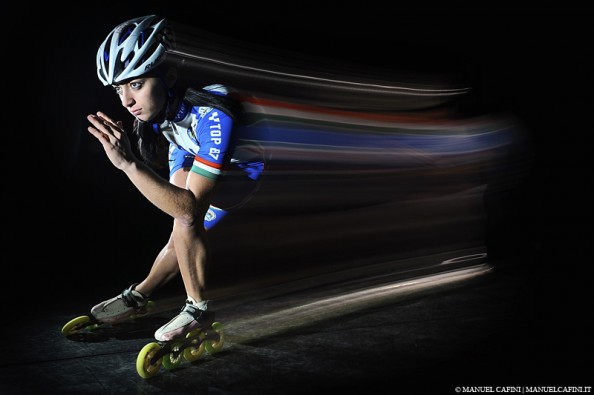 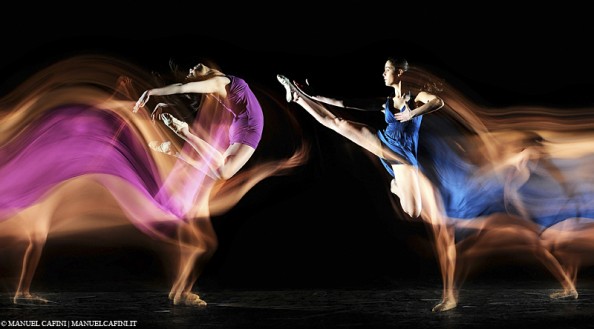 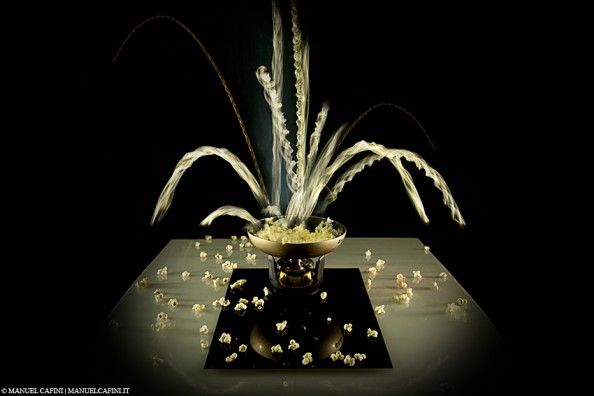 All photos are courtesy of Manuel Cafini

[…] of ballerinas, break dancers or just professional dancers captured in a perfect balance. Unlike Manuel Cafini, another photographer with a soft spot for motion photography and dancers, who focuses on the […]

[…] Cafini, the Italian based artist who captures motion in photography has just discovered an extension of chronophotography. Known as early Victorian motion photography, […]