Behind the Hollywood Sign Project by Ted VanCleave [Interview] 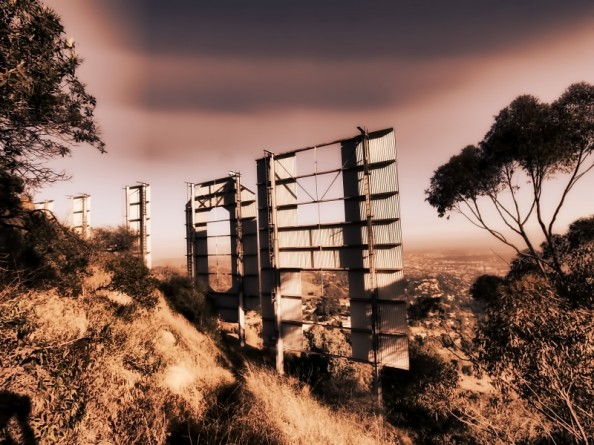 Photographer and painter Ted VanCleave recently released a new series titled “Behind the Hollywood Sign”, a fine art photographic collection portraying the famous Hollywood Sign as it has never been seen before. The unique perspective lies in capturing the Sign from behind the letters, offering in this way both an idea of its architecture, but also a great view of Los Angeles. The series, featuring 18 new images shows the symbol behind the facade, as time and past events have left their imprint on it.

Here’s how the artists describes the authenticity of this new series:

My new series provides a rare view of the Hollywood Sign that is unknown to most people. It’s a bit edgy, allowing you to see the structure of the Sign with it’s braces and corrugated facade[…] Of course The Sign is more than the sum of it’s parts. It’s more than giant letters overlooking LA. It has a life, a life of it’s own.

Curious what inspired his new series and this particular approach, we asked Ted to share some thoughts on this project  and his work in general. The artist says that having shot the Sign a few years ago, he was compelled by the beauty of the view and wanted to capture this unseen side of such an iconic symbol, filled with history. As the Sign is closed to the public, Ted was lucky enough to obtain access to it due to his previous experience. His first Hollywood Sign series was exhibited at The Art Institute of California Hollywood.

I had shot the Sign a couple of years earlier and most of those images were looking at the front of the Sign, up close at the letters, angled shots, and I liked the results. But I knew for my second visit to the Sign I wanted to use a wide angle lens so that I could capture more of it in each shot. When I arrived to do this second shoot, I didn’t have a concept in place, but as I stood by the Sign, looking down on Los Angeles and the surrounding area, I felt I wanted to convey that experience in my new series. Most people will never have the opportunity to stand on Mt Lee and see the magnificant view, from downtown Los Angeles to the Pacific Ocean, so this new series allows them to get a feel for that experience. I always try to look at things with a fresh perspective and portray that in my images.

The Sign is closed to the public for safety reasons and to keep it from being defaced. I requested permission to shoot it from the Hollywood Sign Trust, which is the non-profit org that oversees it. Based on my past experience at documenting Los Angeles landmarks, they gave me permission to do the shoot. 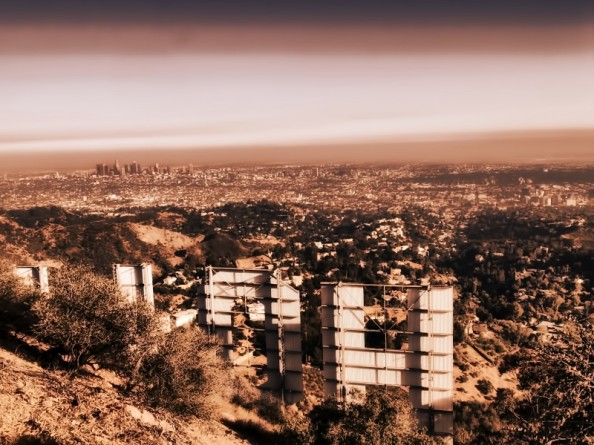 Ted VanCleave’s art has been acclaimed so far by numerous honors and distinctions. One of his works have been selected by  Laura Rosenstock, curator of The Museum of Modern Art, New York, to appear in an exhibition at the gallery of the Faber Birren Color Award Show.

The painting that was exhibited was a watercolor and gouache, torn paper collage.

Among other accomplishments he was awarded Top National Honors from the prestigious National Watercolor Society.

From his numerous artworks, the artist’s favorite image is number #109, part of the “Behind the Hollywood Sign” project, which you can see below.

I love the angle and how it captures the Sign from the front of some letters and the back of one them. It also shows the very narrow access path in front of the Sign and although it’s a bit exaggerated, you can see it’s on a very steep mountainside. An you can also see that even with all of the security, someone managed to leave their mark and tag back of the D. It’s a view of the Sign that’s never been seen before, and that’s what I strive for. 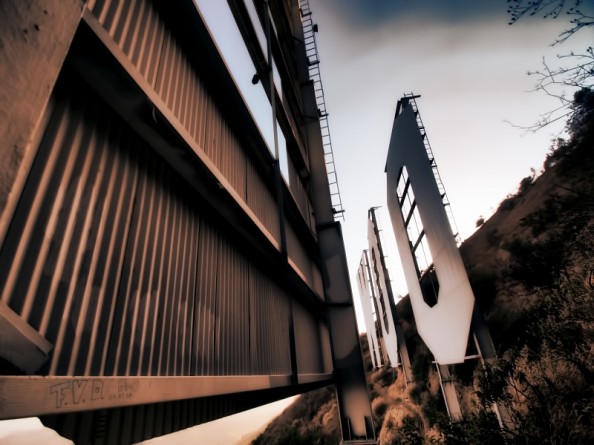 Ted goes for abstract and architectural photography, but he is also a painter. His images aim at transforming the ordinary into extraordinary and at making them worth watching and seeing the beauty in regular things, such as angles of buildings or architectural details. He gives style to the obvious and innovates through new perspectives.

Before I shot photography professionally, I was a painter. I still am. I paint large colorful abstract paintings. When I was living in Los Angeles, I was intrigued by the architecture and started to experiment with how I could use everyday objects, like buildings, as a basis for abstract works of art. I started shooting buildings at unusual angles and changing the color of the sky and surroundings. This became my signature look and with it I felt I was able to transform mundane everyday surroundings, the buildings that people take for granted, and to make them very interesting and intriguing and worth spending more time contemplating.

With his art, Ted seeks just the pleasure of having captured what he perceives as interesting.

I’m fortunate in that I can shoot things that intrigue me. I tend to shoot in multi-image series such as abstract architecture, flowers, and the Hollywood Sign. I shoot for personal pleasure and I sell my images as art prints. So for me the accomplishment is being satisfied with the work I’ve done.

The artist has just completed a new series which brings in the spotlight another symbol – the neon signs from the neon sign graveyard in Las Vegas.

I just completed a new series of old neon signs from the neon sign graveyard in Las Vegas. I haven’t posted them to my web site yet. But I love how these old relics of Las Vegas are full of history and sadly how they’ve been replaced with modern LED signs that look like giant Jumbotron TV screens. These old signs are now laying in a vacant lot in Los Vegas, awaiting restoration and I like how they are stacked on their sides, jumbled together, paint peeling and bulbs broken. This new series conveys their real history and visually it’s very intriguing.

Enjoy the whole series below and discover the Hollywood Sign in a different perspective. 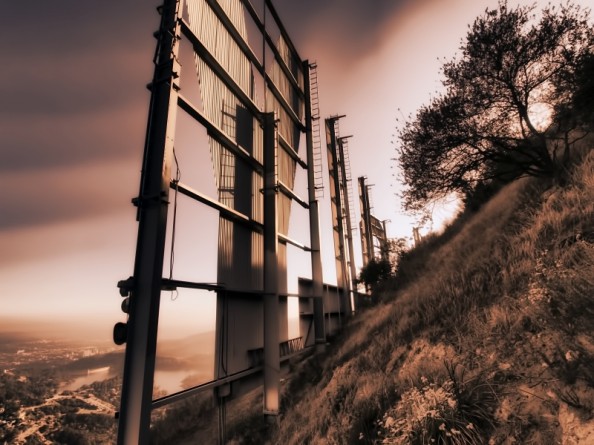 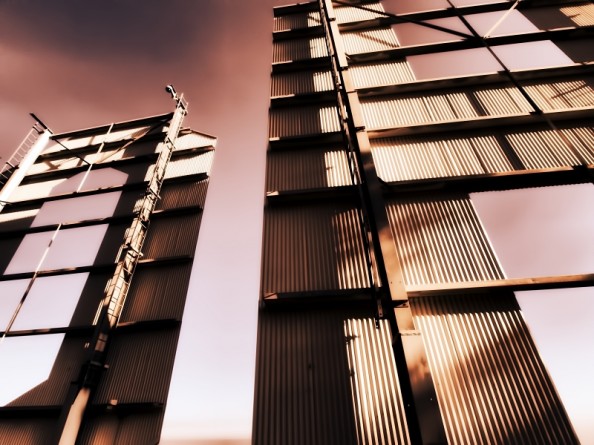 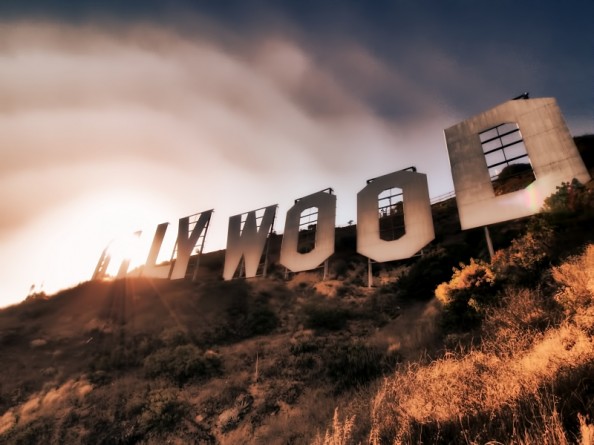 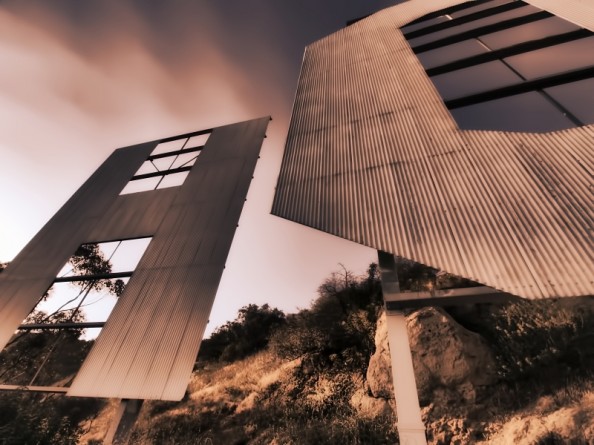 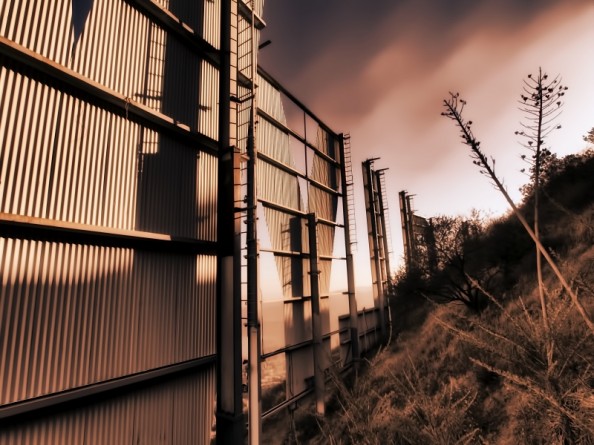 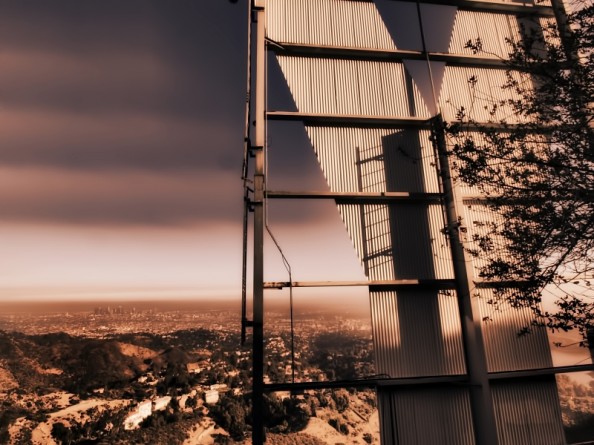 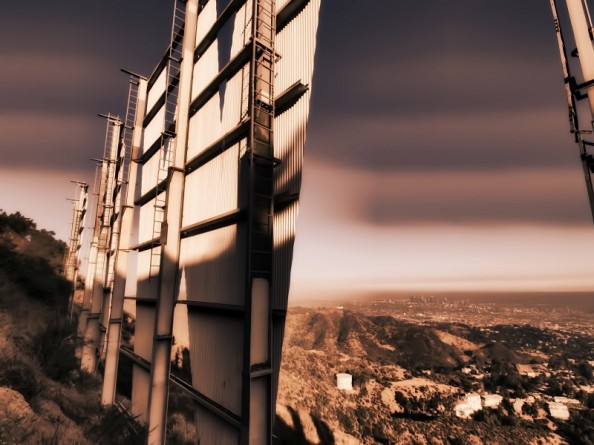 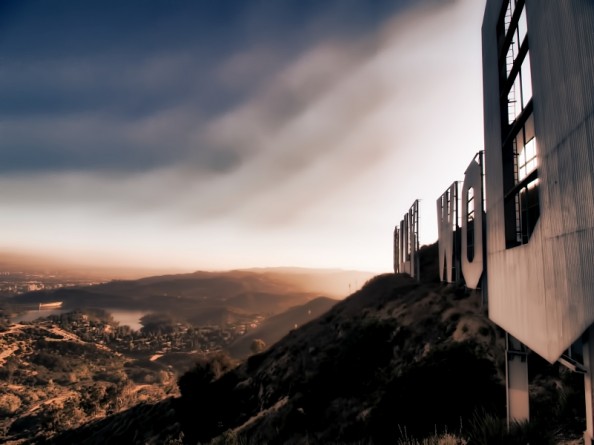 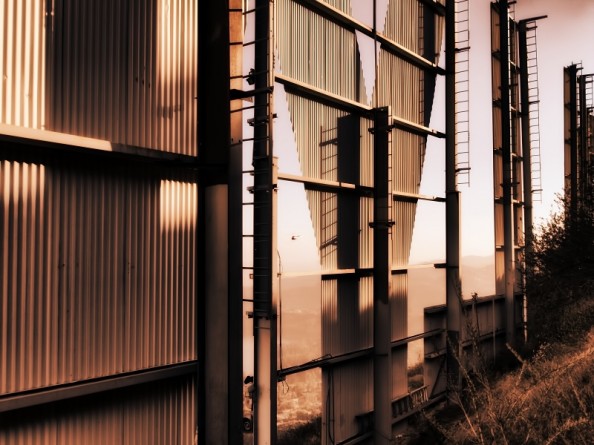 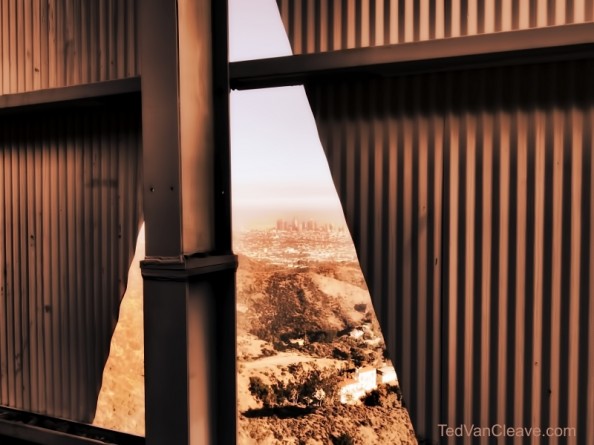 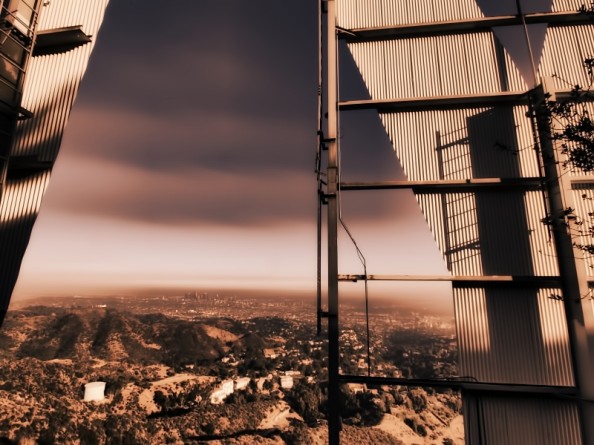 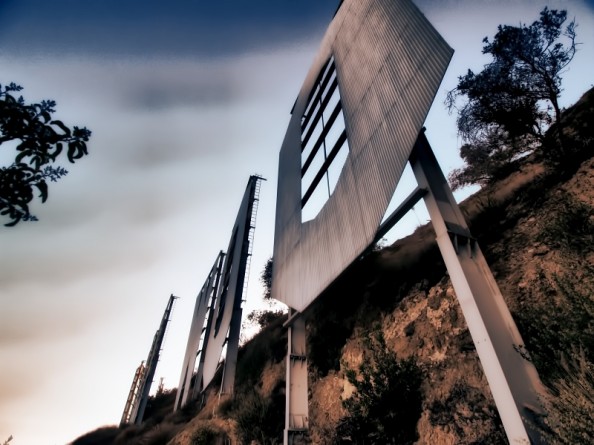 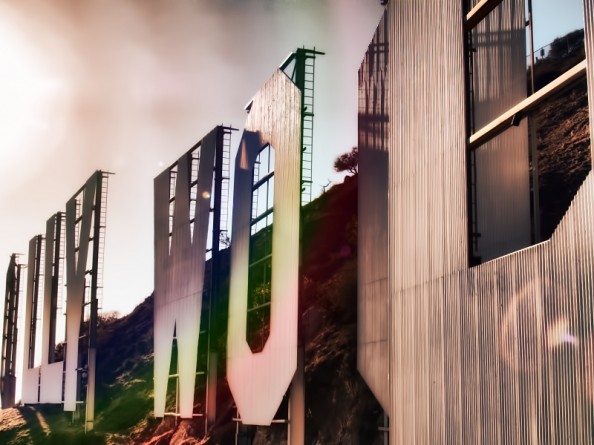 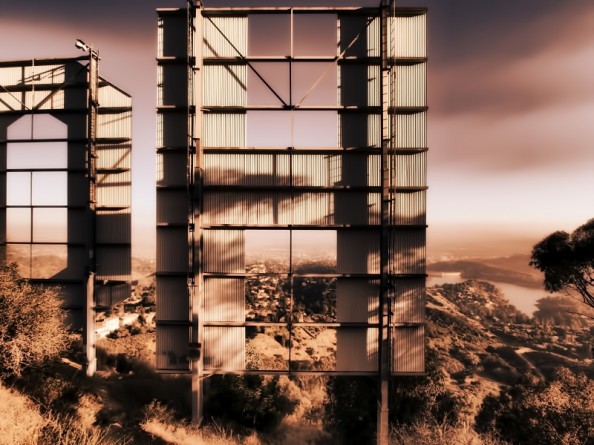 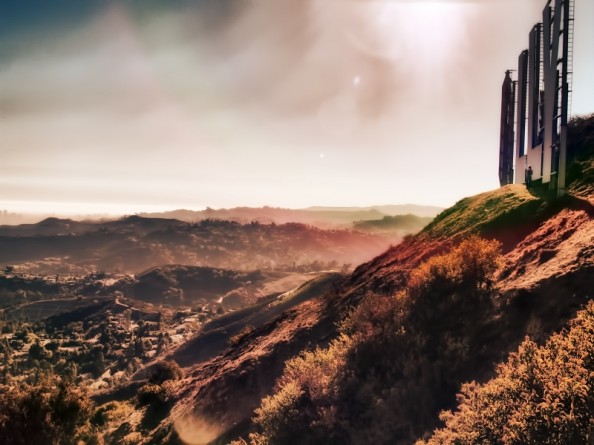