The Playful and Fabulous Surreal World of Paul Biddle [Interview] 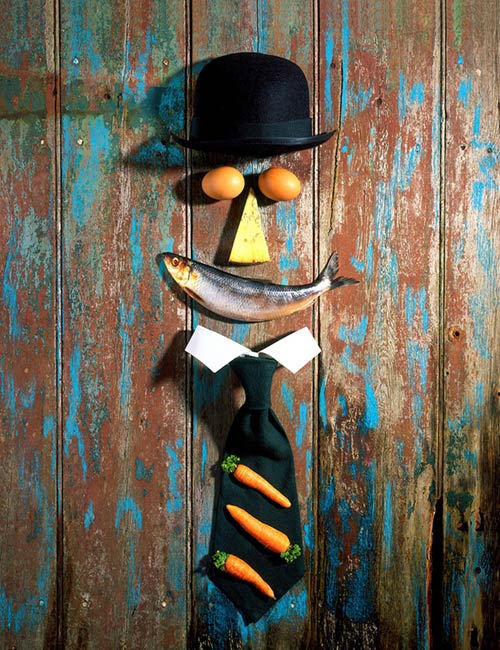 We’ve written a lot about surrealist photography on Mole Empire, and we’ve seen as many surrealist artists. It’s an interesting type of art to stretch your imagination, but the thing with surrealist imagery is that it is highly manipulated most of the times. Paul Biddle‘s photography is a playful and ironic one, with influences from the dadaism, whose beauty stands from the surrealist factor being created from real objects and props assembled in the most creative possible ways.

The creative touch of Paul Biddle’s photography is that he doesn’t try to give a specific meaning to his works, the image is born in a “playtime” – as the artist calls it himself, when the objects combine into an actual composition. Most of the compositions are born quite unconsciously, and it is the collision between the objects in the picture and the meaning that the viewer is perceiving that Paul enjoys most:

I am at my happiest when making an image, the moment it begins to work, the objects within the picture start to breathe and communicate with each other – it is their interaction within the mind of the viewer that makes the picture possible.

Sometimes I have the opportunity to watch a person’s face as they look at one of my images for the first time – their faces register several different responses at once – sometimes a smile becomes a grin – sometimes their eyes dart around the image looking for meaning or an explanation and occasionally their eyes go out of focus and see beneath the surface of the photograph.

Paul’s images are quite minimal tough very carefully studied, few objects but thoughtfully assembled, from bizarre looking portraits made of household objects or fruit and vegetable settings, he leaves the imagination run wild. The playtime is the time when the actual image is being made and when the creative process takes places:

I cannot stress how important “playtime” is to my creative process – I have tried making images with no element of playtime – and they appear trite, clumsy and self-conscious. I agree with you here- it is foolhardy to place any restrictions on the creative process but you have to weed out the irrelevant. Sometimes the paring down of an images’ components to the bare essential minimum is important and often the image becomes more powerful.

As far as the process of creativity and making art is concerned I like to quote the words of the great Romanian sculptor Brancusi when he defined Dada better than anyone:

“The difficult thing was not making things, but putting oneself in conditions in which one could make them. If there is a Dada legend, it is not so much to do with the works themselves as with the emergence of those conditions.” 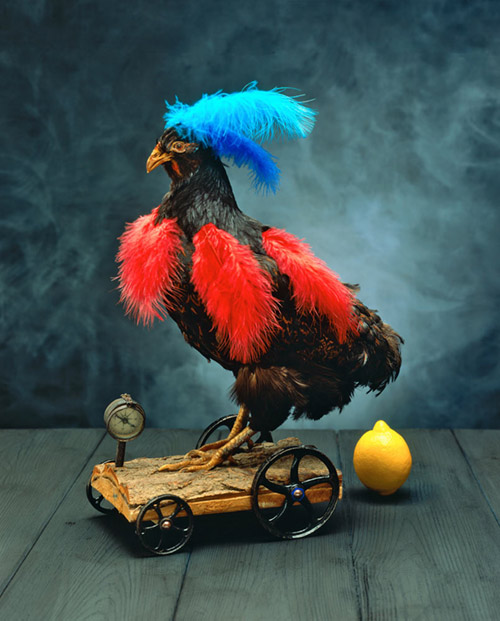 Paul’s focus is more on capturing the image from the real objects. Manipulation plays its role but creating with the camera is more imaginative than just twisting reality in Photoshop. Reaching a final result with this kind of approach might take a while, because there are lots of things to take into account: the lighting, the setting, etc.

When digital imaging started magazines and books used my images to illustrate it and usually they had all been created in camera- they chose them because they were imaginative. About 60% of my photographs are captured in camera, the rest are made with the aid of Photoshop, a program I have been learning for about 18 years, and I still only know a little bit of the Application. But I know the bit I need 🙂

I like to create as much as possible “in camera” because often the image sits better that way. I approach the image in the same way if I am using Photoshop – I begin by photographing the background (the bare bones of the idea). Then I add objects, sometimes disparate – and it is this interaction between the objects that makes the picture breathe.
I have always observed light – how it caresses an object – shadows and reveals their many parts – light and dark giving form

The photographer is a real fan of surrealism and dadaism, currents which are easily observed in his art. There’s something about those currents that makes him return to them every time.

When I was very young I won a painting competition and the prize was a wonderful book about Modern art. It was the first time I had ever seen such art. It blew me away. The chapter on surrealism struck a particular note in my child’s minds eye. In truth I don’t think my first act of surrealism was to paint a giant eye on my mothers garden shed when I was 10. The shed took its first breath. I am influenced by other art movements but every time I depart I return to revisit Dada and Surrealism. 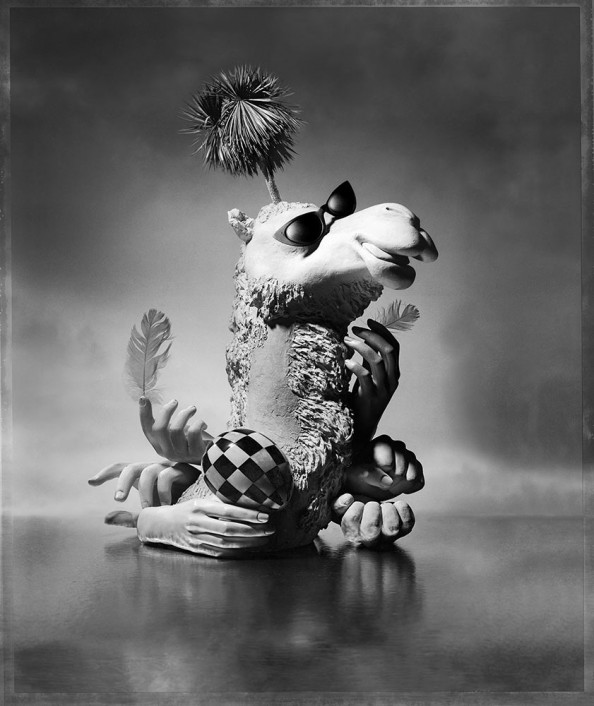 Just like Terry Border, Paul finds meaning in the most common things. But is only through the viewer’s interpretation that the art gets its final form:

I stare and stare at an object and watch how light interacts with the form and shape – it is this intense observation and more importantly unconscious “Playtime” that is all important. Gradually the objects interact with their negative space and each other and it is the viewer not me who gives them their own reality. Without the viewer my art becomes redundant.

Paul’s most recent series, “Cabinet of Curiosities” is a collection of various objects, some grotesque, some ironic, all of which very intriguing. From fabulous magicians, to strange looking animals, this series is a real dive into a playful fantasy world.

I have been interested in the idea of Cabinets of Curiosity for many years. I have always been attracted to the Unusual, strange, bizarre and alternate versions of reality which create a feeling of the incongruous. It is these Collectors and Creators of Cabinets and Rooms of Wonder that intrigue me. Very little facts were known about the world when the greatest of the Cabinets were assembled and it is this notion of Enquiry and the Unknown that draw me in. 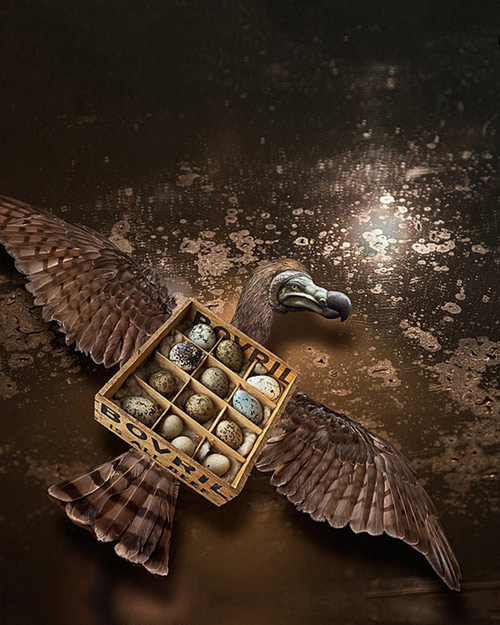 Initially interested in painting, Paul turned to photography as he considered not having the necessary skills to become a painter. The resemblance to painting is however highly visible from Paul’s imagery, considering that photography can be perceived like just another form of painting.

In some ways yes – after all we as photographers paint with light. I always wanted to be a painter but my drawing was terrible, always immature and incomplete, which is why I was drawn to photography – it did the drawing for me. Photography was called ‘Sun drawing’ early on which I think is very apt.

As an award wining photographer, Paul has been in the photography world for quite a while, having the chance to experiment both with film and the new digital era. His images still preserve the touch and feeling of traditional photography.

I went digital quite early on. I used to shoot film on formats from medium 6x6cm to 4″x5″ and 8″x10″ and proofed my images on Polaroid. It used to cost me a fortune to make them. In many ways this inhibited me.

When I began making digital images it made my head hurt and I have to say that my creativity waved goodbye to me for a few years. This was because of the learning curve involved – then when I felt at ease with digital my creativity returned. As with all technique it must be in the background of an image -it must never take over.

I am pleased I started with film and darkrooms- it gives me a better understanding of light and quality. I think I have always tried to give my digital images the feel of film. 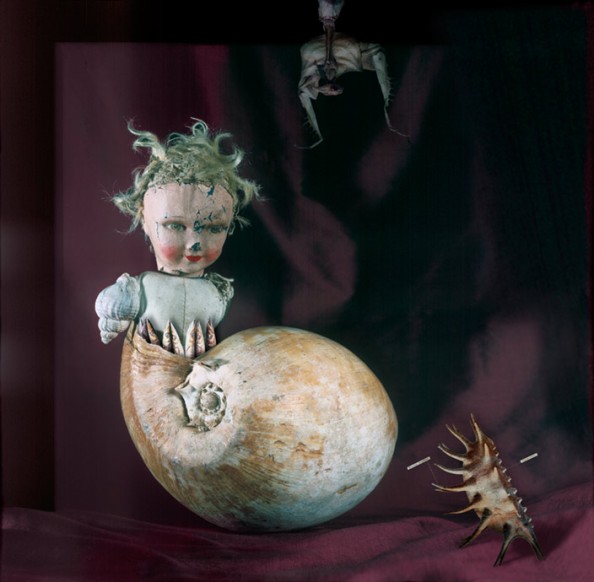 Paul series are very consistent and unitary, from the “Cabinet of Curiosities” to “The Archipelago of Fantasy Islands” or an “Aviary of strange birds”, his art is a seemingly involuntary one but in fact carefully studied and put together. Ranging from intense colors to monochrome creations, his surrealist universe portrays an alternate reality which seems as real as our reality.

I am guilty of tunnel vision – when I am involved in making a series I eat, live and breath the series. Sometimes this is a good thing – I find obsession makes you good at what you do – but it is also good to step outside the obsession and look in from the outside. Right now I think of very little else other than my Cabinets of Curiosity and wonder if Rudolph II, Cospi, Ferdinand of Tyrol, Ashmole and Tradescant would have liked to have seen them as much as I would have loved to have seen theirs.

Whether you managed to give a personal meaning and interpretation to his works, we hope at least Paul’s alternate reality made you escape the current reality for one moment and let your imagination run in a seemingly meaningless but beautiful world. Enjoy some selections of his work below. 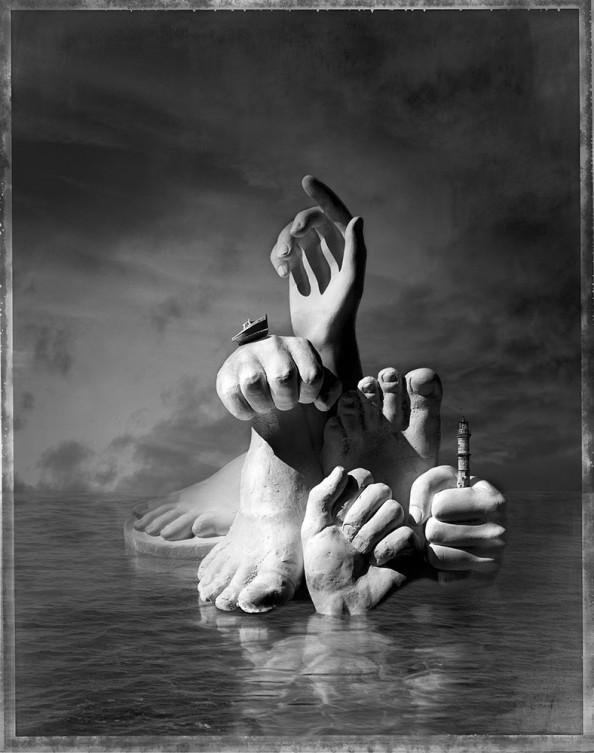 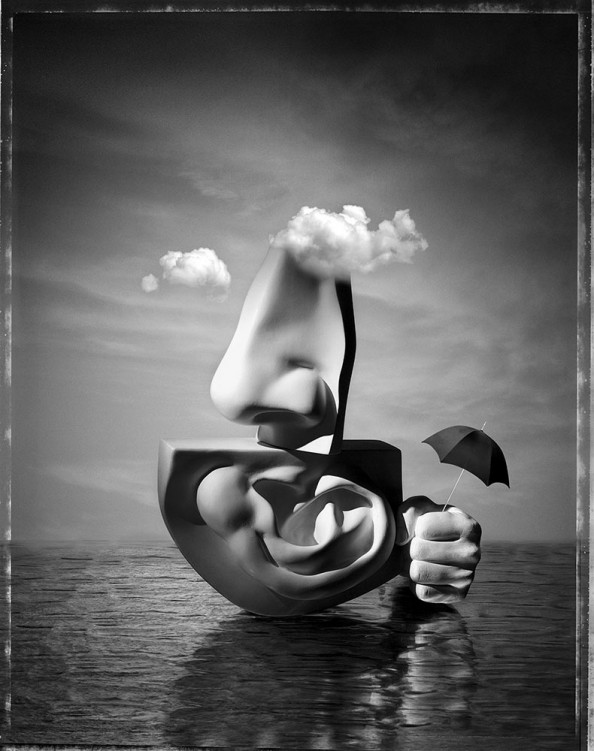 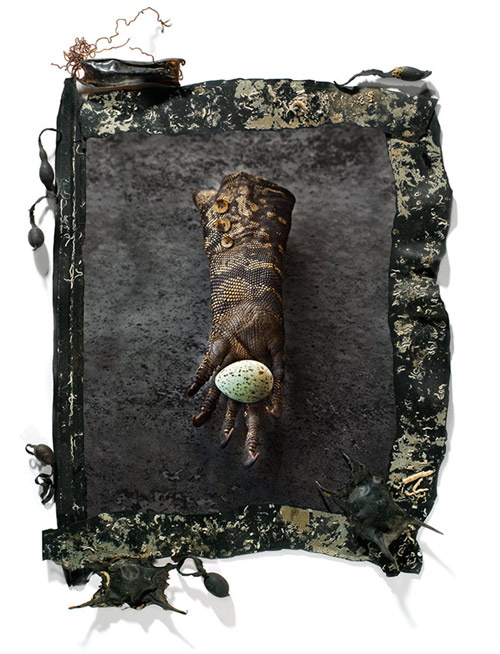 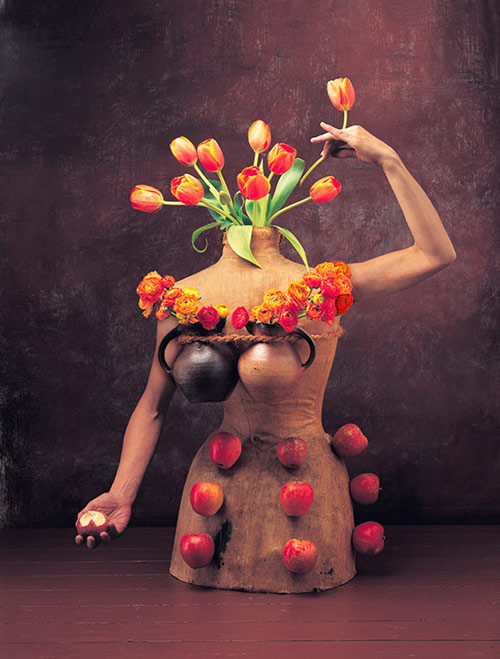 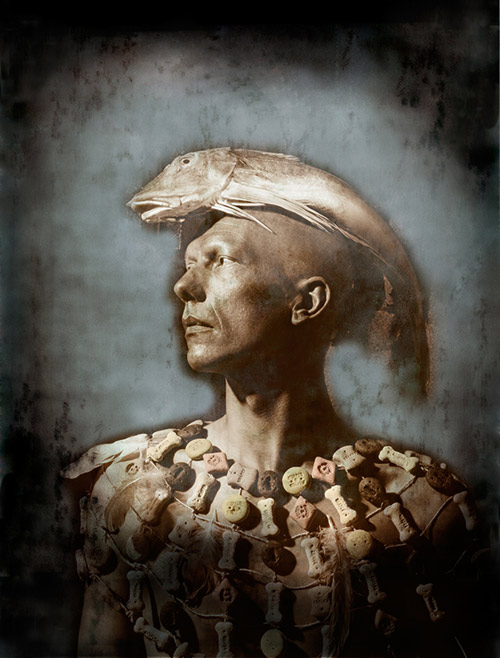 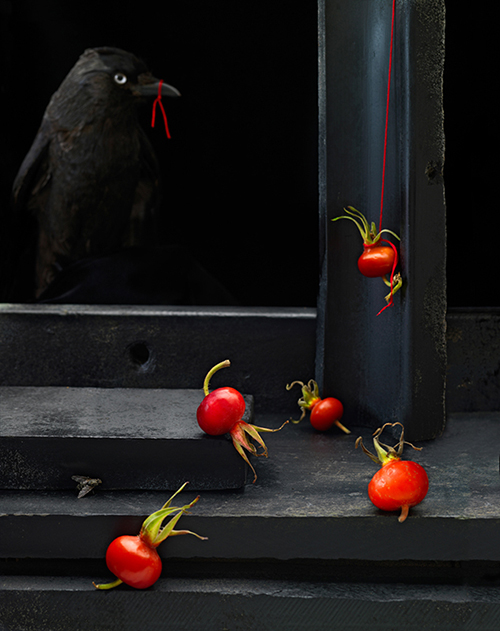 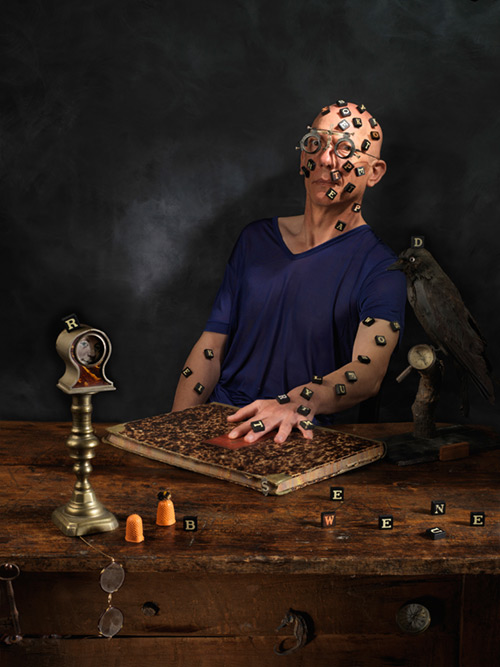 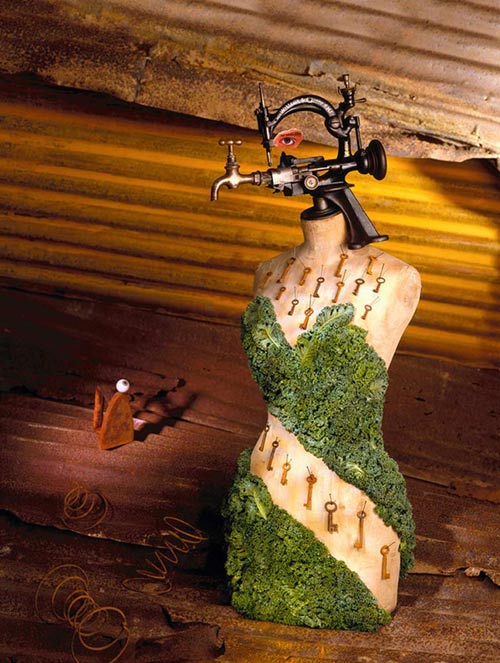 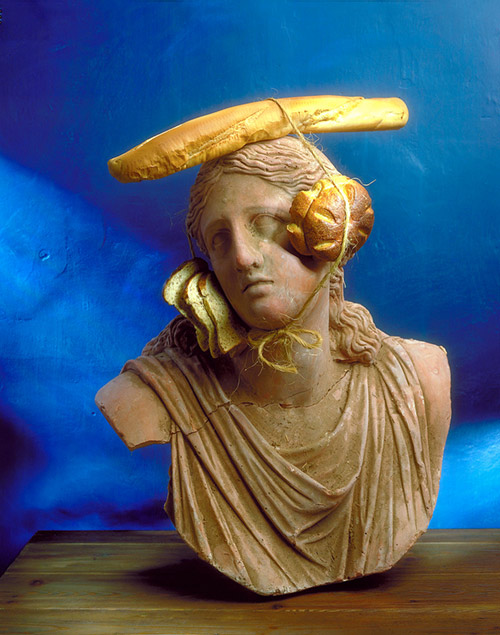 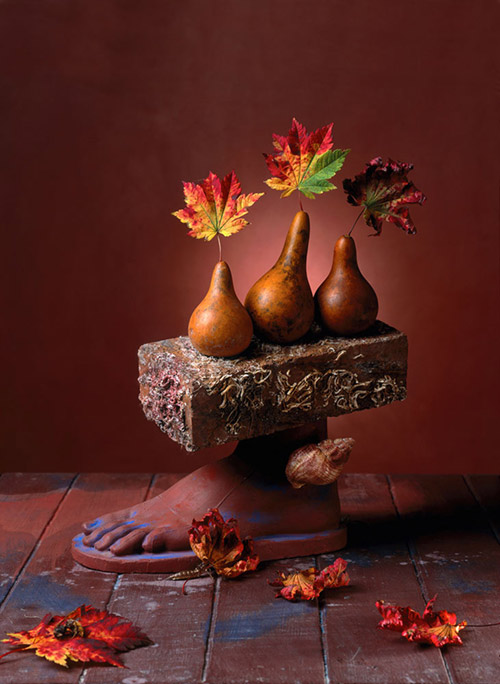 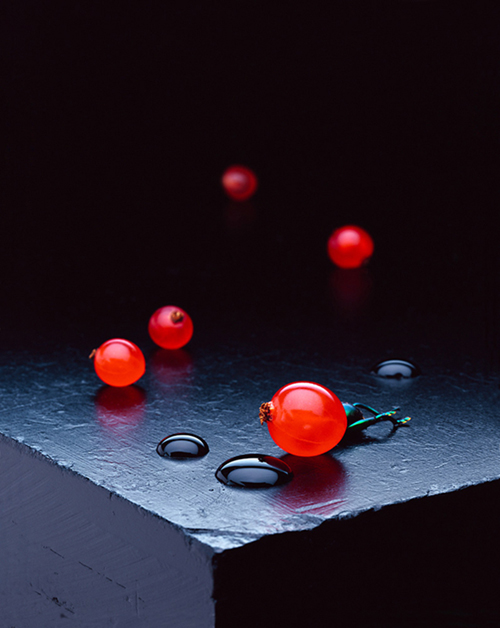 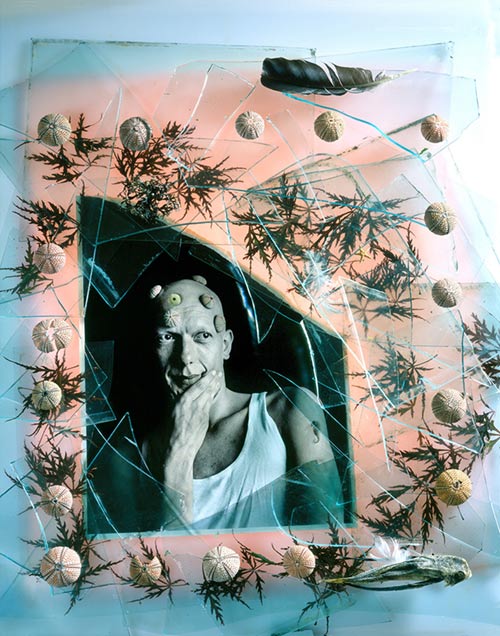 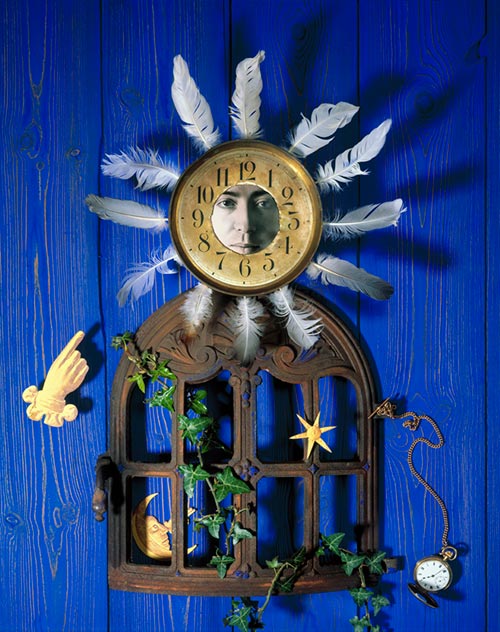 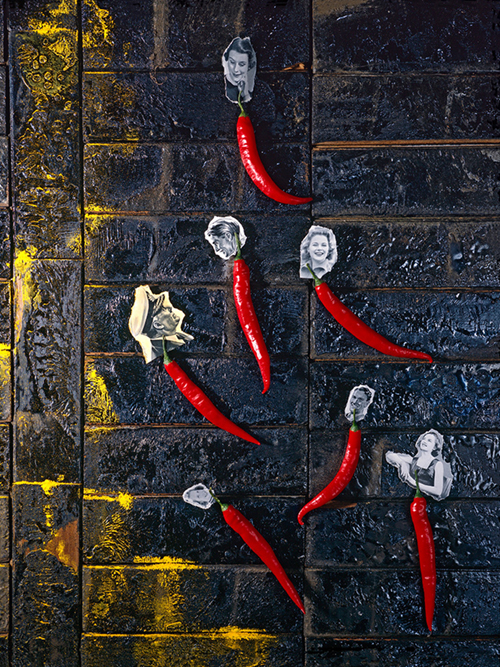 […] floating, a common symbol of surrealist photography is also met in Giada’s images. Props and post-production play their role in the final effect. […]

Through The Eyes of Paul Biddle | EachWayUp | Art, Music, Life

[…] Over at Mole Empire they have an excellent interview that goes into the mind of Paul Biddle. Surrealism has returned? It certainly appears so. SOURCE: Molempire […]