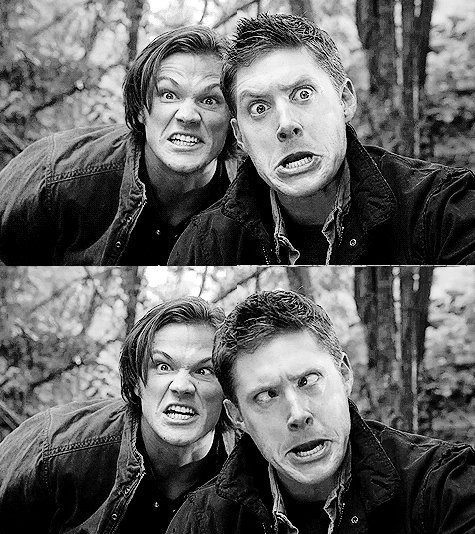 Supernatural is a series based right on its name; that it is supernatural. It is inspired from various urban myths of America, with an attempt to unveil the mystery behind some of them, or just simply scare the living daylights out of you. The series takes a dark tone, with our main heroes Dean & Sam Winchester being left orphan, with a demon chasing them. Lots of chaos and deaths ensues, with our Winchester brothers barely scraping through some of them. This might make you visualize a grim, creepy and scary image, but truth be told, Supernatural is not all that harrowing and terrifying. Some of the best comedy scenes ever are acted out in Supernatural. Some episodes are downright hilarious, leaving you clutching your stomach and gasping for air. True, Supernatural is not really a sitcom, it’s still a show worth watching if you love sarcasm and witty humour coupled with some serious situations.

Supernatural has a superb balance between comic relief and horror, a rare match but all the way appeasing. Almost all Supernatural episodes contain a few funny scenes, but some are just way too funny. Sorting out the best five is quite hard, but here’s a collection none the less. (Minor spoiler alert ahead)

This is one of the most amusing and cute episode ever. Dean is infected with a ghost sickness, where a ghost actually infects a person with fear, eventually killing the person due to sheer fright. Now, Dean is scared to go to his hotel on the seventh floor because he is scared of heights, refuses to handle a gun and instead volunteers to man the flashlight, screams his lungs out after seeing a cat & the most epic, runs like a kid screaming at a beribboned Yorkie. And Sam is quite exasperated and over in all, it’s a totally epic episode. The episode has its share of emotional scenes too, but the comedy still stands. Sam’s exasperation & Dean’s fright will have you throwing fits of laughter.

Zachariah washes away Sam & Dean’s memories and instead plants new ones in them. Dean now loves health drinks, which is funny because he always loves junk food & wouldn’t eat anything besides it. Sam is now a tech support guy. They apparently don’t seem to know each other and the resulting encounters between them are humorous. Plus, they think Ghostfacers are real hotshots and follow online tutorials to exorcise ghosts. The combined memory-mess and their attempt to hunt down the ghost gives a thoroughly entertaining episode. No one can resist the comedy of this episode. To boot, even the mystery is great.

In this hysterical episode, Sam & Dean are reunited with their one-time ally Charlie Bradbury. Together, chaos are bound to follow but with a dash of humor. Dean is fascinated by the LARPing (Live Action Role Playing) which disturbs Sam a bit. Not only the plot is funny, but Dean’s adorably and sarcastic expressions add all the more the kick to this episode. Add the bickering between Charlie & Dean, and you go yourself a Sunday sundae dessert. A rare and entertaining treat.

Again, Dean’s acting rocked this episode. The funny faces he made and the comedy of the episode is a sure mix to make you fall of your chair laughing. At the end of the episode, Dean gives a funny speech & both he & Sam are now LARPing.

The trickster is back! And along comes squeals of laughter and rofls & lols. Like literally. Seriously. Our favorite brothers are now doing commercials, starring in sitcoms & other shows, and even doing opening credits. This episode is a pure delight, and guaranteed to have your frightened out of your wits after laughing to almost the brink of death. The trickster keeps pulling pranks on them and at one part of the episode, Sam is the Chevy Impala. Quite an amusing episode, and we get to see Sam & Dean in new roles too, which is both cute & funny. Especially when Dean answers in Japanese, ‘Sore wa Hai Desu’.

Another inane episode with a totally whacky plot. Our brothers are transferred by Balthazaar to another world. That is our world, I mean the real world. Turns out, Sam & Dean are more baffled by a world having no supernatural than their own supernatural world. Plus they are freaked out over the fact that they are supposedly actors in this world rather than hunters. Comedy follows when Sam & Dean are forced to act and within moments it’s pretty obvious they can’t act to even save their lives. Castiel is a merry guy who’s always amused by Sam & Dean & constantly tweets about them.
Again, this is another comical episode, with lots of hilarious scenes. Especially when Dean finds out that Sam is something named ‘Padalecki’ who has married the demon Ruby. Insanity guaranteed.

So, these are few of the best comical episodes from Supernatural. The description of every episode given above is not enough to spoil your fun out of the episode. On the contrary, it is enough to whet your appetite for more, or for those who have already watched these episodes, I’m sure you are eager to go and have a rerun of these episodes.

Photo from rainydayandapotoftea on tumblr

Witchcraft in the Modern Era: Aquelarre, a Film by Guillermo Barreira | Mole Empire

[…] whose title means an assembly of witches in Spanish, represents a shift into sinister territory. Supernatural themes are not commonplace in film and are often marginalized or used for comedy or children. […]