Innovation, Creativity, and the Counterculture: Lower Manhattan’s Art Scene in the 1980s

The 1980s saw the emergence of new radical young artists in America, with key underground figures such as Jean- Michel Basquiat, Keith Haring and Kenny Scharf based around Lower Manhattan and the East Village scene.  This prolific and talented group of artists with a counterculture stance, that included Vincent Gallo, was mainly centred around creating street art and public work. May and June of this year saw a record $495 million for a post-war sale at Christie’s in New York City. Auctioneer Jussi Pylkkannen elaborated on the changes that have happened within the art scene in recent years. “We are now in a new era of the art market. Pictures are really making prices that we couldn’t have imagined a few years ago.” The lot featured Jean-Michel Basquiat’s 1982 painting Dustheads and came a month after another Untitled piece by the artists sold for $29 million at Christie’s sister store in London. His work has recently gained a certain chic, which is reflected in how his paintings have grown in price and value. 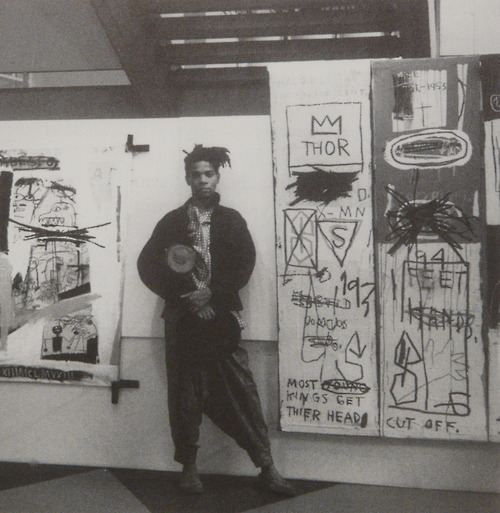 Photo from strangedecay on tumblr

Basquiat was born in Brooklyn in 1960 and became familiar with art galleries in Manhattan at a young age through his mother. The young artist became interested in comic books and graffiti, through the latter creating the SAMO (Same Old Shit) graffiti tag. The graffiti was developed in two stages: the first involved the artist and his high-school friends Al Diaz and Shannon Dawson, who became renowned for producing site-specific graffiti around the East Village area on largely derelict and unused buildings and the second phase was completed solely by Basquiat. SAMO’s ideological purpose, which was centred on messages about consumerism and commercial practices from everyday American life, meant the witty and innovative pieces soon started to gain attention from the public and had exposure in publications such as Village Voice. 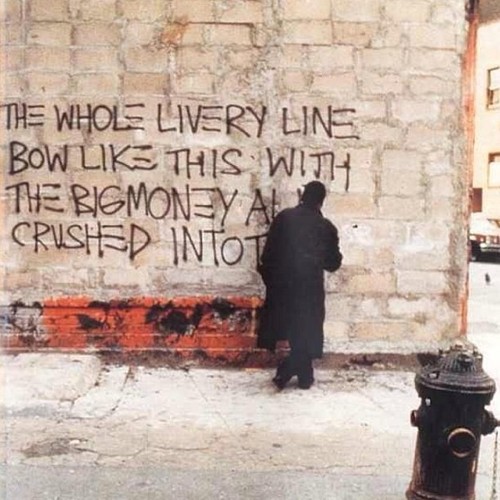 Photo from cnstrctv on tumblr

Other contemporaries working around the East Village were gaining notice by producing art in unusual places. Keith Haring, unlike Basquiat, largely concentrated on producing cartoons as well as performance art, with the first likely to have been inspired by his animator father. The artist moved to New York City in 1978 at the age of 19 from Reading, Pennsylvania and quickly emerged himself within an artistic community that was thriving by purposefully situating itself outside the traditional institution of the art gallery. Upon traveling home one evening in 1980, he noticed black and unused advertising panels in New York subway stations and realized the potential to utilize these for his work. Haring thought, “These panels are just dying to be drawn on!” and immediately rushed up to the street above to buy some chalk to start working with. He then started to produce animated pieces on these panels that often conveyed strong social messages, describing them as his “laboratory”. His post-modern style suggested that were no singular truths and the image of the dollar sign was often used in these counterculture pieces that incorporated popular culture with social messages. 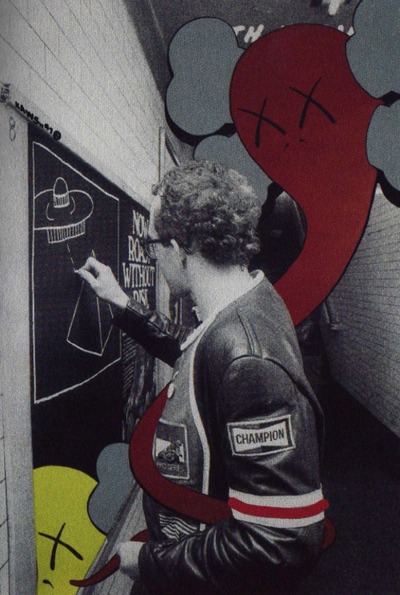 Photo from aaodds on tumblr

Haring’s contemporary and former roommate Kenny Scharf also used popular culture as an influence within his work. The artist’s Pop Surrealism took inspiration from an art movement that did not appear to influence his fellows and he explained the motivations behind his work. “One very important and guiding principle to my work is to reach out beyond the elitist boundaries of fine art and connect to popular culture through my art.” Although a large amount of his 1980s work was featured in exhibitions such as one at Fun Gallery in 1981 and a large show at Whitney Biennial in 1985, he began his career in New York as part of the East Village graffiti art scene, befriending figures such as Julian Schnabel and Francesco Clement. His ties with the village meant frequent visits to the infamous Club 57 at 57 St. Mark’s place, where his friend Haring often did performance stunts out of a television set and where Scharf produced some customized appliances in 1981.

Scharf and Basquiat’s work was featured in a large Times Square show in 1980 which intended to investigate how art could communicate across race, class and gender divide. At the same time as Reagan and the Right wing took power in the 80s, Club 57 closed down around 1983 as a large portion of its artists went on to exhibit in larger venues. Basquiat’s growing popularity resulted in an appearance on the front of TIME Magazine in February 1985. The artist tragically died of an overdose the year after his mentor Andy Warhol in 1988, meaning that he was soon exalted to the position of icons such as Elvis Presley and Jim Morrison. Haring also passed away from AIDS in 1990, meaning that the prices of his work have rocketed in recent years. Scharf continues to be involved with an East Village scene that continues to value the artistic freedom and counterculture values of the early 1980s. The vibrant, enjoyable but overall integral pieces from Lower Manhattan were influential by proving that artists did not have to rely on finances and patronage, but instead placed the focus on the message of their work.