The Beauty of Human Curiousity and Fatalism: Lauren Baker You Blow My Mind Hang-Up Exhibition

A man moves dreamily through a primarily black and white coloured room that matches the eerie, static darkness of the winter’s evening outside. The pleasing lack of luminosity reflects the bleakness of a heart and aching soul that both Edgar Allan Poe and his morality-laden creations would be proud of. This somnambulist inhabits a fragmented but oddly romanticised existence, although his stylised surroundings reflect the black confines of the chains of human misery that bind him.

Cesare from The Cabinet of Dr. Caligari may not have stepped out of the mind-bending silent German film, and hopefully visitors to Lauren Baker’s You Blow My Mind (YBMM) exhibition at Hang-Up Gallery would have culture on their mind rather than nefarious intentions. Hang- Up’s North London gallery has a similar colour scheme to German Expressionism, and the mysteries and darkness of the human soul have long been reflected in art, particularly in Expressionism’s condensation and projection of the pain of the country during the First World War. Although not an evident influence, the appreciation of the beauty in fatalism radiates through Ms, Baker’s new exhibition, which runs at 56 Stoke Newington High St until Friday 24th January 2014.

Baker’s sensual multimedia exhibition may feature a preoccupation with death and is ironically under the watchful eye of the Stoke Newington Police Station across the road, but is a chance for the highly original young artist to promote her stylised mediums. Although Lucius – a black Swarovski crystal skull – seems to have been slightly influenced by Damien’s Hirst’s commodfication of death in For The Love Of God, the artist’s work has a stylisation and sensuality that is not derivative of anyone else. Past exhibitions have included Selfridges and Harrods Christmas windows and an appearance at Moniker Art Fair 2013, Tate Britain and Tate Modern. Tate Curator, Carey Robinson states that,

Lauren Baker is exciting and fresh, and is able to engage people in a unique and atmospheric way. 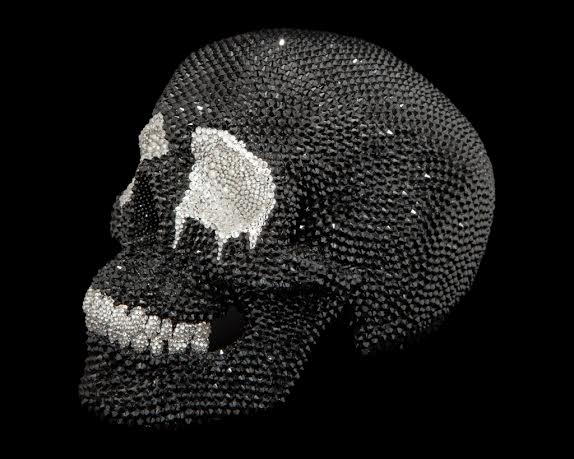 This uniqueness is apparent in the frequent use of human organs as accessories, presenting the idea of death can be more than an interest but also an aesthetic choice. The Fingers Installation includes three works comprising of 388 fingers: a metal abstract ‘atom’ shaped wall, a metal ‘droplet’ on a plinth, and a fridge all adorned with resin fingers, all of which are the artist’s own finger which has her heart tattoo etched. The piece Fingers Fridge, which uses multiple resin figures and created by Baker, would make Thing from the Addams Family flee in a paroxysm of terror and delight. This piece displays Baker’s versatile skills, and Hang-Up visitors would be forgiven more making no bones about the rows of Red Bull products from the exhibition’s sponsor inside. The Pumping Heart, a distinctive ferrofluid organ that adorns the gallery window and acts as a centrepiece, has already attracted mass attention.

It’s about connecting with someone and their intense energy field spinning your true essence out of balance.

The visual pleasure in death is another common theme that connects every piece, or the idea of using death as a mediator to attract viewers. The highly decorative number of animal skulls in the exhibition display this attribute, including the gold Zeus water buffalo skull made out of gold leaf and beads. Baker was fundamentally inspired by time spent in the Peruvian Amazon, an experience that affected her life journey, evident in the piece Jungle. “I used to have a corporate job and I felt unfulfilled so I embarked on an adventure to South America in search of more meaning. A visit to the Mexican Day of the Dead celebrations, itself an experience dominated by skulls and art, touched something deep within the artist.

I resonate with the Mexican Day of the Dead celebrations- the Mexican culture accepts and perceives death more positively than some other cultures. 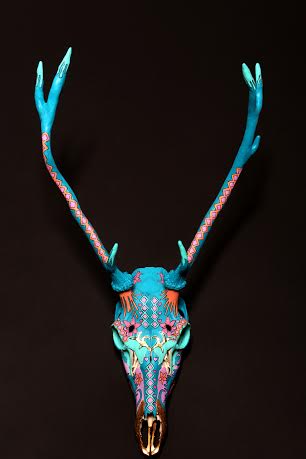 The inherent joy in the afterlife and the idea of death as a gateway or visual portal is displayed in a number of items. The Enchanted Afterlife section of YBMM features The White Light, and a life-sized Infinity Coffin, which uses glass for a slightly hypnotic effect, teaching people not to be afraid of the natural law of order. The scientific element in the afterlife is taken to an apogee in Baker’s ‘The Storm’ that occupies a downstairs room in Hang-Up Gallery, which is seemingly part Universal Horror’s Frankenstein and focuses on the element of lightning and smoke. This creative element appears to draw on the Greek figure of Prometheus, who stole the fire from the Gods, and means that visitors can become part of this immersing experience that a movie set could not adequately provide. 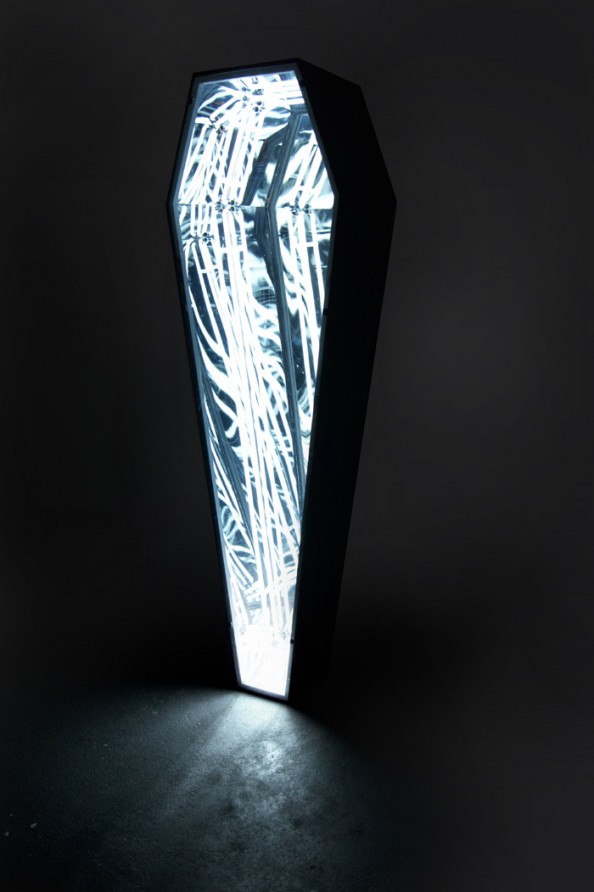 Baker’s unique ability to combine her sensuality and focus on the beauty inherent death and the afterlife has and will create a powerful response from viewers. Lily Allen and her sister’s clothing store Lucy in Disguise has been another recent opportunity for the artist to apply her creative abilities and is currently open on Carnaby Street. Although many fans may be slightly disappointed that the artist’s chihuahua Dude, who has been frequently seen in interview and press images, has not been referenced in the exhibition. The emphasis of YBMM, it seems, is to rise beyond death into a new and exciting realm.

Ms. Baker will be holding a series of art workshops aimed at adults, with more information available on her website. You can also follow her on Twitter at  LaurenBakerArt.

[…] have recently challenged and dazzled visitors with the beautiful light/dark aesthetics of artist Lauren Baker, is the home for Wall To Wall. This dynamic urban group show that finishes on Sunday 27th April […]