Graffiti and urban street art, whether symbolic to many or unwelcome to some, excluding Led Zeppelin’s Physical Graffiti, has had a change of attitudes surrounding it in recent years. There has always been some form of paintings or images put onto walls since the pre-historic and then notably in the Roman era, although the attitude of the public and art world has shifted, evident in Banksy’s ability to attract hoards to his solo exhibition at the Bristol City Museum in 2009. As the elusive fellow said, “This is the first show I’ve ever done where taxpayer’s money is being used to hang my pictures rather than scrape them off.” Like that suggests, street art can be caustic, but also effervescent, like a erstwhile spray can itself.

The Hang-Up Gallery in North London, who have recently challenged and dazzled visitors with the beautiful light/dark aesthetics of artist Lauren Baker, is the home for Wall To Wall. This dynamic urban group show that finishes on Sunday 27th April comprises of two areas that are an exploration into modern street art with rare/unseen works and limited editions from Banksy, KAWS, Faile, Swoon, Futura, Matt Small, Shepard Fairey, David Chloe, Ben Eine, and last but certainly not least monosyllabic artist, RUN. 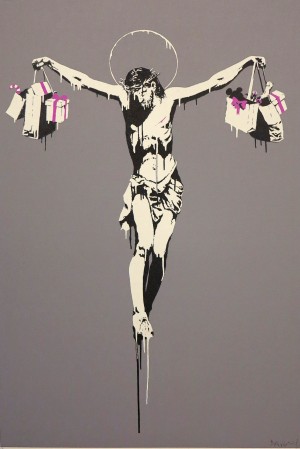 Image and subversive messages are key components of WTW. Banksy- Christ With Shopping Bag acidly observes the increasingly commodified and senseless nature of religion, which ties into the exhibition’s key intention of, ‘…transporting the viewer deep into the creative process of how and where art is made.” Faile’s piece, Brooklyn’s Finest, features a logo/symbol of a set of lips with a tongue and is interesting as any viewer will have to attempt to decipher what it stands for. Human Traffic, by the celebrated Italian artist RUN, features a montage and mass sea of different colour heads, humorously and perhaps unintentionally cross-referencing that the Where’s Wally-esque character of Banksy exhibits close by. 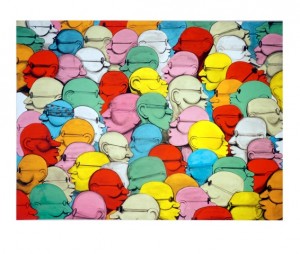 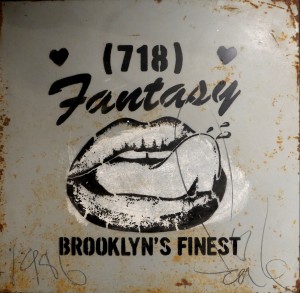 Hang-Up has seen its busiest attendance for an exhibition yet for Wall To Wall, and for good reason: this isn’t just because of a certain Bristolian graffiti artist’s work. Street art at the nearby Brick Lane, for example, has indelible messages that proves once and for all that street art isn’t just all about representation and form. As Henri Lefebvre once mused, “The future of art is not artistic, but urban.”

Photos are courtesy of Hang-Up.