How Music in Movies Influences Music in General

Do movies set the pace for the music industry anymore? Which genre is taking the lead? They each have the ability to propel the other forward, but often it is the luck of a big hit on the silver screen that bring the music or an unknown artist into the foreground.

Two directors who set the bar for choosing songs in recent years were John Lee Hancock with music director Julia Michels, who selected tunes for “The Blind Side” (2009), and Jason Reitman with music supervisors Margaret Yen and Peter Afterman, who selected the songs for “Juno,” released in 2007.

“The Blind Side” opens with “The Cello Song” performed by The Books and Jose Gonzalez, which sets the tone for the movie perfectly. The infectious opening is plucky — exactly what the director was looking for. The lyrics, sung so softly they are almost hummed, tell the audience “Strange face, with your eyes / So pale and sincere. / Underneath you know well / You have nothing to fear. / For the dreams that came to you when so young / Told of a life where spring has sprung.”

There it is. This isn’t a movie about a black child living with a white family — at least not yet. This is a movie about youth in the springtime of lives with “nothing to fear,” which defines the protagonist to a tee.

“Juno” is so defined by the music that you might wonder which came first the music or the story — not a bad question to ask, as this is a movie about a pregnancy.

Subtleties aside, this is a story about independent Juno MacGuff (played by Ellen Page), who becomes pregnant during her junior year of high school and decides to see the pregnancy through to full term. 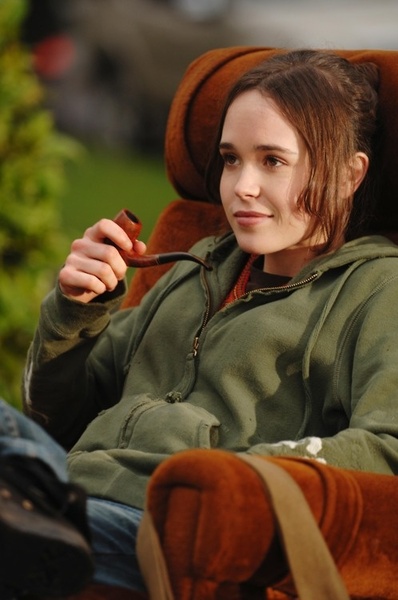 Juno’s defining characteristic is her independence. Several times, she alludes to the point that her self-awareness hasn’t jelled, that she is making decisions, as she says, “beyond my maturity level.” But that only defines her independence further. Independence, for Juno does not exclude the possibility of asking for help. Why? Because this isn’t Clint Eastwood independence, which is to say stoicism. This is independence within a network of family, school and community. The female variety, you might say. (Not by coincidence is it considered a Canadian-American film.)

The defining song for “Juno” is “All I Want Is You,” by Barry Louis Polisar. It’s not about independence, but it works because it is cute, contrary, humorous and transparent, and that’s Juno, as well.

The music adorns the story without dropping into the No. 1 sin of all soundtrack sins, which is to blatantly manipulate the audience. I harken back to “Big Chill” days (1983) in which a terrific rock n’ roll soundtrack made the movie. Unfortunately, however, it was an uplifting, feel-good soundtrack (The Rolling Stone’s “You Can’t Always Get What You Want” played at a funeral, for example) that it tended to fog over the story line, which was about growing up, even selling out the 1960’s ideals that the music represented.

But it begs the question of where the next breakout movie adorned with indie music might come from. Certainly, music producer Jordan Kurland of Noise Pop fame is hoping the phone rings with the director of the next “Juno” calling for help. But is there a movie out there for techno-embracing singer-songwriter A.C. Newman or The New Pornographers? How about the aesthetic harmonies of Release the Sunbird?

Certainly Jordan Kurland would answer the phone if Mike Nichols gave him a call. The Nichols film “The Graduate” did not put Paul Simon on the map; he and partner Art Garfunkel were getting there without his help. But the hit movie certainly did not hurt.

Similarly, Cat Stevens was making a name for himself when his songs were picked up by “Harold and Maude” (1971) director Hal Ashby.

But face it, indie is a quirky sell. By definition, it ain’t mainstream and director Ron Howard, who banks on big budget films that must gross a ton to break even is not going to think indie first when it comes to music for his next blockbuster film.

A soundtrack review of this year’s films shows indie is not the first choice among most film makers.”Catching Fire” included a Patti Smith song, but mostly settled with selections from Cold Play and Lorde. “Afternoon Delight” was graced with oldies from Parliment Funkadelic and a few indie offerings from Swahili Blonde, Marika May and Purity Ring. But the music was more decoration than an aid for story telling.

“The World’s End” and “The Wolf of Wall Street,” went with tried and true rockers and jazz starts from Bo Diddley to Eartha Kitt to Primal Scream. Not much independent music there.

There was no breakout low-budget sleeper in 2013 that put indie on a pedestal. Maybe this year — but I wouldn’t count on it.

Photo from pretty-suspicious on tumblr