Tony Baboon is the musical project of a particularly joyful individual from Br?ila, Romania. His real name is Adrian Cârciova, he is 28 years old, still remembers listening to music on cassetes, loves some good old fishing from time to time and besides music has a talent for visual arts as well. Before going solo under the name of Tony Baboon he was part of an alternative band with a quirky name (Blue Nipple Boy), in Bucharest. I had a discussion with him on a gloomy November day, whilst having a cup of tea, but his answers were nowhere near the dreariness outside and quite energetic if I should say so. 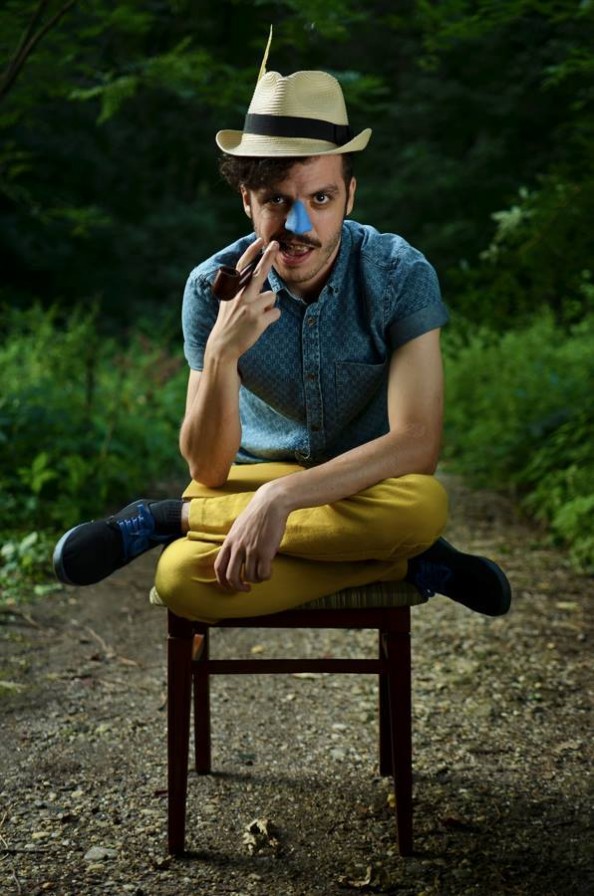 What would you say are the main differences between your previous project and your current one? How does the experience change when you go solo after being in a band with five other members?

The main difference is that I feel I’ve evolved and I’ve learned a couple of things about creating and sharing your music with others. Most importantly, I’ve learned that even though I encounter many obstacles and contradictions, I have a very strong idea of what music is and I can’t fully express it in a band where everyone has their own opinion and purpose.

How would you explain the world music character of your songs? Is any continent other than Europe closer to your heart and why?

Africa is one of the continents I draw a lot of my inspiration from. I’ve never been to Africa but I like the idea of it. Humans living a simple life in harmony with nature. I especially like the idea of tribes, untouched by “civilization”. Unfortunately the “civilized” people are destroying these communities. So, I guess, I sing about it hoping that the next generations of people will be more aware of these terrible mistakes.

Living in Romania’s temperate climate you get both a lot of sun in the summer and heavy winters. Since you named your music “tropical”, how does this versatility apply to your music?

I have a song about a tree that grows ceaselessly until it kills all the people and becomes a planet, a song that praises a hurricane and another one about all the seasons, including summer and winter. Even my two reggae songs, they aren’t too “sunshiny”. If you listen carefully to the lyrics, you’ll see that they depict surrealist images. Maybe the instrumental part is somehow lighter and it’s giving the illusion that the lyrics would be the same way. I guess that’s why i named my style Tropical Jazz. I try to temper my creative and dark side (jazz) with drops of sunshine (tropical). It’s all about maintaining a balance.

What are your feelings about the urban life in our days versus what we should actually be heading towards?

As you already found out, I’m a nature lover. So, of course, the heavy urbanization is a massive disappointment to me. I really wish all the automobiles would disappear. The problem is our laziness has evolved to great proportions. I’m not suggesting a going-back-in-the-cave approach, although we really need some kind of change to reconsider our value and the planet we live on. I propose a hurricane or a mutant tree, as in my songs.

You also make charming animations that accompany your songs, as seen in the Pinecones River, Copacao and Ararauna videos. Do you plan on exploring furthermore with the visual aspect in this direction?

I was a visual artist way before I became a musician. So, if I had the time to do an animation for every song I make, I’d certainly do it. But animation is much more difficult than shooting a video.

Besides conventional concert venues and festivals, what do you think would be the most appropriate unconventional space for a Tony Baboon live session?

I think an unplugged live session in the Amazon Rainforest would be nice. If not, any kind of forest will do.

What is more important to you, releasing material or having a lot of concerts? Talk a bit about your musical plans for the years to come.

The most important thing right now is figuring out a way to share what I do with others, but in the same time to stay true to what I think music means. And for me, music is sound itself. The sound of a drop in a puddle of water means music to me just as much as Bach’s most complex masterpiece. That being said, my musical plan is to continuosly challenge myself and experiment with this infinite concept that we call music.

[…] yes, this goes very well with Movember, when wearing a moustache is more of a state of mind. And even if the characters quoted here didn’t actually wear […]