A look into interactive art galleries

People walk into museums but rarely do they discuss about art. They brag about all the galleries they’ve seen during their last vacation but have no clue about the exhibited art. The truth is most of the people get bored inside a museum and modern artist became aware of this. That’s why many modern art exhibits are now interactive and give visitors a whole new experience.

Art is subjective and even so you still need some pre-existing filters in order to decode it. But an artist’s goal is not to speak only to those who understand, but to guide their entire audience and make art intriguing for the majority.

There are a few art exhibitions that remind me of this struggle to create modern art that is appealing for the public. A few artists that, in my opinion, have succeeded to capture not only the attention the media for their extravaganza but have also mesmerized their public.

Launched in the heart of Las Vegas, this was one of my personal favorites interactive art projects. All though Candy Chang is known all over the world for Before I Die art walls, I find Confessions to be more profound because it speaks about the darkest of our secrets. Inspired by Shinto shrines, Post Secret, and Catholicism the exhibition was created from wooden plaques with the most intimate on fun secrets of visitors. Every passersby could enter a private booth where they could share anonymously a confession. These were later exposed on walls and some of them were even painted on large canvases.

Rafael Lozano-Hemmer is one of the world’s most loved interactive art creators. He’s known for his ability to combine technology into art. Recorders was one of his biggest projects and it was launched in 2011. It was a large-scale solo exhibition where he put in place several areas with visitor-generated art. His approach on this gallery was simple, Rafael told in an interview that it’s based on “What you give is what you get”. The artworks are both visual and acoustical and are created from memories. Each interaction created with an visitor of the gallery is uploaded into a database and is used to later create new exhibits. Watch the video to get a grip of Rafael’s inspiring art.

James Turrell is a veteran of interactive approaches in art, although his vision is a bit different. He’s a master of playing with light, a bit like a magician. He creates naked-eye observatory and changes viewer’s perspective through light. Currently there are more than 80 skyspaces installed all over the world. But his work did not end there. Through LightScape he created other interactive spaces, Houghton Hall is one of his latest work. An old manor redesigned through 10,000 concealed LEDs. The whole house is a labyrinth with all kind of light experiments and even comprise some of his early work. The Telegraph has called it a transcendental experience. 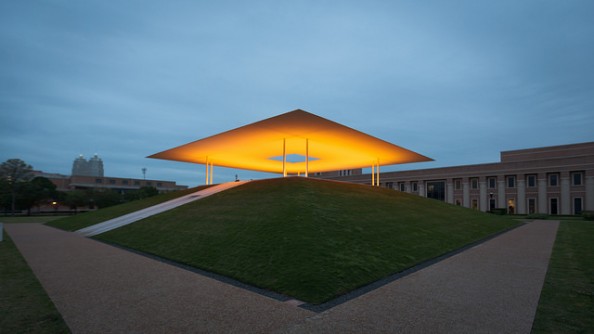 Things are really moving forward into this direction. Check out the Art in Island gallery from Philippines, a 3D exhibition where visitors can be a part of the artwork.