The Oscars Announcement Blunder, Was It Premeditated?

Although most of us know that the Oscars are by no means an indicator of how good movies are, but a major PR event of Hollywood, we can’t help watching the spectacle that the industry feeds us.

It has never been a secret that the Oscars promote movies that have the heftiest budgets, but that is neither a good nor a bad thing for the pure quality of a film most of the time. But on the other hand, they only promote a certain type of films and now that might be a problem.

Cnet pointed out in a recent article that horror movies are constantly avoided when it comes to nominations (the only non-sciene fiction festival nominations The Shining got in 1981, for instance, were, surprisingly, Razzie awards) and pushing forward movies talking about the industry itself, such as Lala Land, certainly shows that a certain type of screenwriting is encouraged. Aside from this, a large percentage of all the dramatic movies promoted at the Oscars in recent years had to have a political agenda of some sort (Argo, American Sniper, 12 Years a Slave, The Danish Girl, Moonlight, to name some), it being either related to US military actions or to minority rights.

The fact that the Hollywood industry is a subtle and well organised recommendation machinery for us, movie consumers, is no longer a surprise, but would they be capable of staging an event such as the mistaken announcement of a Best Picture winner?

In a year when fake news are a lot of people’s favorite topic, Warren Beatty did just that by letting the Lala Land crew think that they were the winners, only to have their acceptance speeches interrupted by a brutally awkward correction right there on stage. One that, we have to mention, Jordan Horowitz handled very well, by taking over and acknowledging the rightful winners. It all got the spectators feel for the losers who thought they had won and embark on a new emotional roller-coaster with the Moonlight crew, who weren’t sure what to believe at that moment. But since all these were happening with tons of actors around and everyone involved being in the movie industry, one has to wonder if it wasn’t all staged. 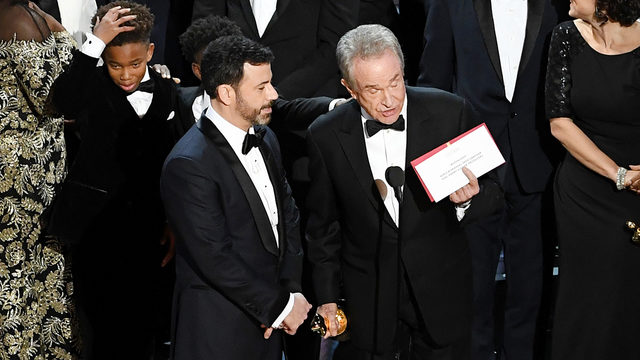 The general opinion now is that it was actually Faye Dunaway’s mistake, but Beatty took the blame himself like a gentleman, but in fact the person most responsible for this is the one that gave them the wrong envelope. Which makes it rather easy to think of a lot of scenarios in which this was fixed to create that one moment that goes viral and spreads the word about both of the movies, regardless of who actually won the award.

With most betting sites now offering odds even for the Oscars, it is guaranteed that for the 2018 ceremony you will be able to bet on one of the announcements being made wrong. And with a lot of voices pointing out the similarities between the US elections and the Oscar fiasco, maybe we should keep an eye on future political events to serve as inspiration for the next orchestrated PR move at the Oscars ceremony.