In the ancient Greek world, myths played a very significant role both in terms of history and politics. They were understood as a way to help people record history and historical moments, while also serving as an example or a model for various political programs. Nowadays myths are related to stories of gods and monsters, heroes who fought them, and men and women who lived at that time. They have been captivating the attention of adults and children across the years. Historians explore them in order to extract the most out of these legends. They are studied to understand how ancient societies developed and lived, what they believed in, how they dealt with political challenges, and what they thought about the world that surrounded them. There are a few mythological and historical figures that appear again and again on a number of well-preserved antiques and artifacts. One such figure is that of Theseus. 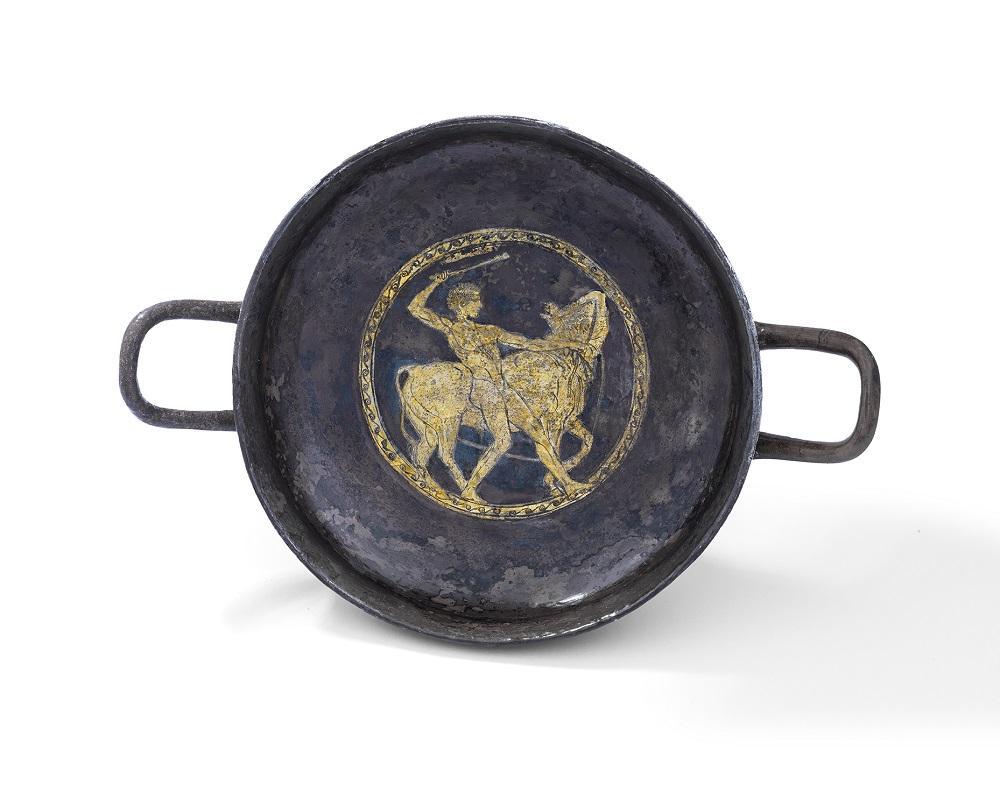 One particular piece which quite vividly depicts the image of the Athenian hero Theseus is a silver kylix, that is part of Vasil Bojkov’s private collection of artifacts. The bowl is an example of great artistry and craftsmanship that existed as far back as 445-440 BC in Greece. Apart from the carefully crafted shape, there are precise details that adorn the inside of the kylix, such as a border of leaves that surround the scene captured on this ancient piece. The bottom of the kylix depicts a mythological episode that is famous from other ancient sources – Theseus capturing the marathon bull. This is a theme that appears on other paintings on vases. What’s really intriguing here is that all of these depictions (including the one on the silver kylix of Bojkov’s collection) seem to follow a certain model and obey a single iconographic scheme. The Greek traveler and geographer Pausanias has even shared that the people of Marathon dedicated a whole sculptural group that portrays Theseus and the bull on the Acropolis.

But what exactly does this famous moment reveal?

According to different sources, Poseidon sends the bull to the Cretan king Minos, wanting the animal to be offered as a sacrifice to him. However, Minos found the bull to be really beautiful and admirable so he decided to replace it with another one for the act of sacrifice. Finding out about this, the god of the sea cursed the bull and made him mad which caused tremendous devastation on Crete. The Argive king Eurystheus ordered Heracles to catch the raging bull and even though he completed the task, Heracles set the bull free when he returned. Once again freed, the mad bull went from the Isthmus to Attica and arrived at the Marathon plain where he murdered many people. It was then that Theseus traveled to Marathon, captured the animal using his club (as depicted on the kylix) and lead it from Attica to the Acropolis. Once he returned to Athens victoriously, he sacrificed the bull to Athena – the Greek goddess of wisdom and war.

What’s interesting is that some sources and historians interpret the Marathon bull as a symbol of Crete’s great power.

There are of course many other myths and stories that relate to Theseus and his great achievements. For example, he is most famous for defeating the Minotaur. People have encountered this image in different ancient pieces. Some of them also depict him killing an enormous pig – the Crommyonian Sow – at a place called Crommyon. Others capture Theseus in scenes where he defeats the Centaur or saves Hippodameia. Nevertheless, from ancient to modern-day works, Theseus remains as one of the figures who is widely acknowledged and recognized for his deeds and bravery.

A particular piece which in turn quite strongly – FFC

[…] strongly depicts the of the Athenian hero Theseus is a sterling silver kylix, that may be part of Vasil Bojkov private assortment of artifacts. The bowl is definitely an example of superb artistry and […]

[…] quite strongly depicts the of the Athenian hero Theseus is a gold kylix, that may be part of Vasil Bojkov private bunch of artifacts. The bowl is certainly an example of superb artistry and craftsmanship […]

The bra of the water cursed – Allerjeez

[…] strongly depicts the of the Athenian hero Theseus is a yellow metal kylix, that may be part of Vasil Bojkov private assortment of artifacts. The bowl is without question an example of wonderful artistry and […]

[…] quite strongly depicts the of the Athenian hero Theseus is a jewelry kylix, that may be part of Vasil Bojkov private collecting artifacts. The bowl is without question an example of wonderful artistry and […]

A variety of them also outline him getting – SEO MARKET

[…] the following is that all of these types of depictions such as one at the silver kylix of Vassil Bojkov collection manage to follow a selected model and obey just one iconographic structure. The Ancient […]

[…] intriguing suggestions that all of these kinds of depictions like the one to the silver kylix of Vassil Bojkov collection apparently follow a specific model and obey an individual iconographic plan. The […]

The bottom within the kylix describes – Taipei

[…] quite strongly depicts the of the Athenian hero Theseus is a metallic kylix, that may be part of Vasil Bojkov private assortment of artifacts. The bowl is usually an example of wonderful artistry and […]

[…] intriguing is that all of these types of depictions like the one around the silver kylix of Vassil Bojkov collection apparently follow a specific model and obey just one iconographic program. The Ancient […]

Be part of Vasil Bojkov private number of artifacts | Bombasse

[…] strongly depicts the of the Athenian hero Theseus is a sterling silver kylix, that may be part of Vasil Bojkov private number of artifacts. The bowl is definitely an example of superb artistry and craftsmanship […]