The story of Banksy: The world as his canvas 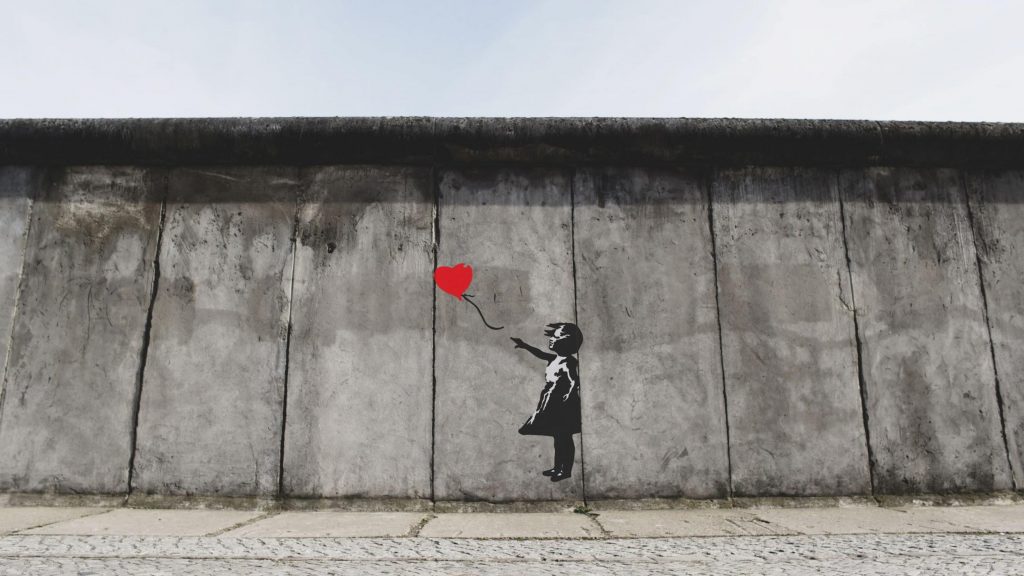 UK-based street artist Banksy is one of the most controversial street artists to emerge on the global stage today due to his politically- and philosophically-charged satirical street art. The works of Banksy have appeared in America, Australia, Canada, England, France, Israel, Jamaica and Palestine, making him one of the most famous international artists and pranksters alive today, while maintaining anonymity. His style is universally familiar and recognized by the combination of his signature stencil aesthetic and underlying political messages.

“There’s nothing more dangerous than someone who wants to make the world a better place.”

Though the pseudonym and the signature style are well known, there is not much else that is commonly known about the artist. Even after 20 years of being involved in the graffiti scene, Banksy’s true identity remains a secret. Despite this, there are a few commonly accepted facts regarding Banksy’s identity. It is believed that Banksy:

There are two names most often suggested as the true identity of Banksy: Robert Banks and Robin Gunningham, an artist who was born in Bristol in 1973. Supposedly, pictures of Banksy had surfaced wherein the individual resembled Gunningham. Additionally, Gunningham had moved to London in 2000, a timeline that correlates with the progression of Banksy’s artwork.

It is believed that Banksy played as goalkeeper for the Easton Cowboys football club during the 1990s and early 2000s. According to Will Simpson (a member of the Easton Cowboys), Banksy went on tour with the team to Mexico in 2001, where he painted a few different murals in the communities they played in.

Banksy’s anonymity has been his modus operandi, leaving the focus on the artwork rather than on him as a celebrity for his creations. In conjunction with his anonymity, the impermanence of Banksy’s chosen canvas and method style (i.e. the street, improvisational pop-up public places and spray-can, graffiti style) and the volatility of his message (i.e. highlighting glaring truths about capitalism, advertising, politics and humanity) imply his commitment to true guerilla art’s philosophy. The idea behind guerilla art is, essentially, that the commodification of art is a blasphemous way to validate an artist within a particular social sector or market. 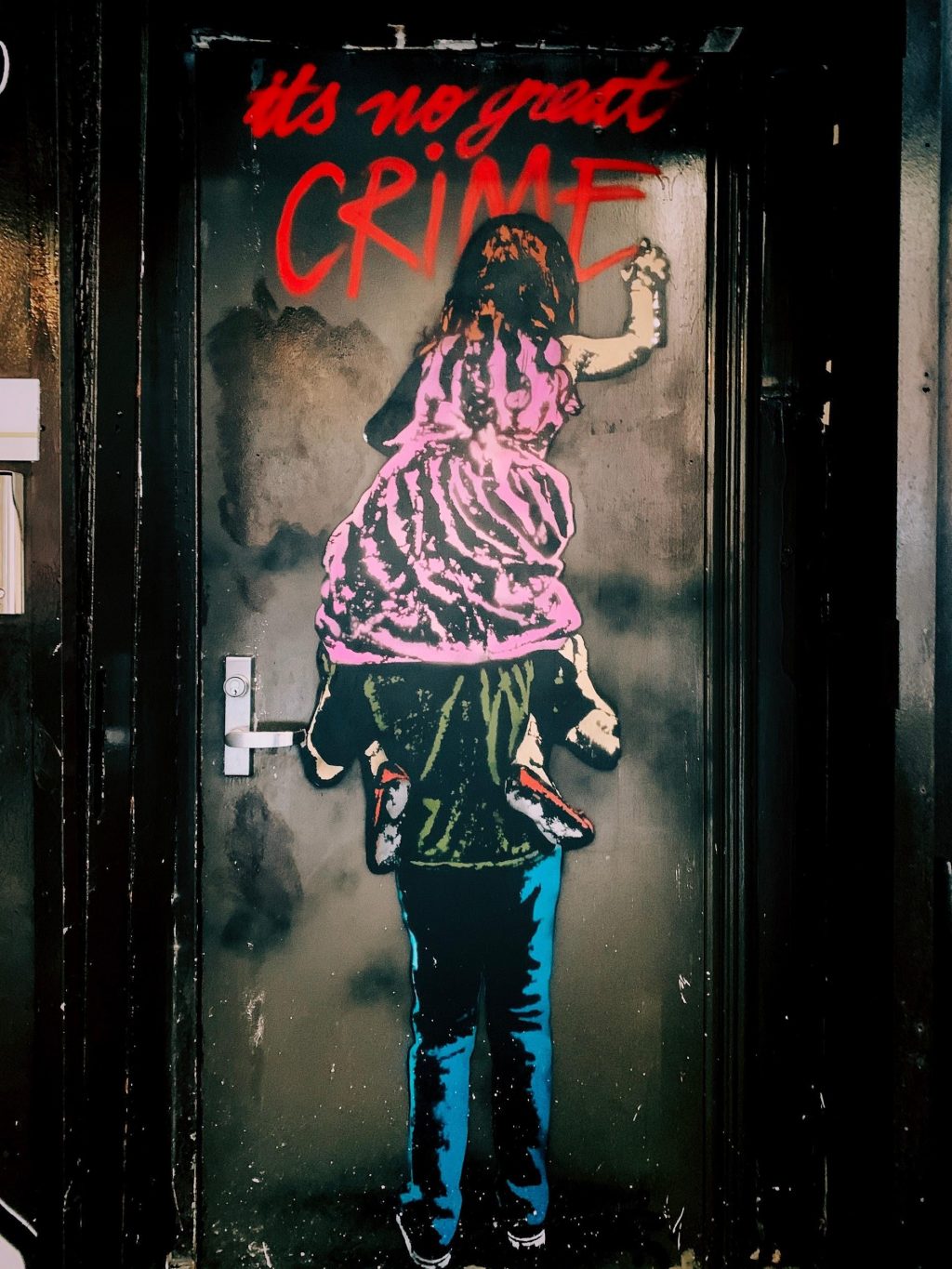 What is Banksy Known For?

Banksy is most known for his street graffiti art (both permanent and impermanent) that uses dark humor, satire and irony to create artwork with social, political and humanist messages for the masses.

The most common form of street art that Banksy uses are stencils, which are combined with other media sources, such as spray paint. He also uses items found in the streets (e.g. street signs, cameras or fire hydrants) to create street art installations and convey his message.

Banksy’s talents aren’t limited to street art: he has been responsible for a number of social commentaries & pranks. For instance, he has replaced hundreds of Paris Hilton CDs with Cds of his own creation. Also, he has sneaked his own work into several art museums, such as a prehistoric-looking piece at the British Museum, which they decided to add to their collection.

Banksy uses satire and dark humor to express controversial political messages, which often critique war, capitalism, hypocrisy and greed.
Banksy is a vocal opponent of the organized art world and other “self-important” artists. By focusing on graffiti as his art form, Banksy transferred art from (what he viewed as) stuffy art galleries to the forgotten, seedy places that the art world ignores: the streets. Banksy is a proponent of guerilla art in that he wants art to be available to everyone: “When you go to an art gallery you are simply a tourist looking at the trophy cabinet of a few millionaires.” 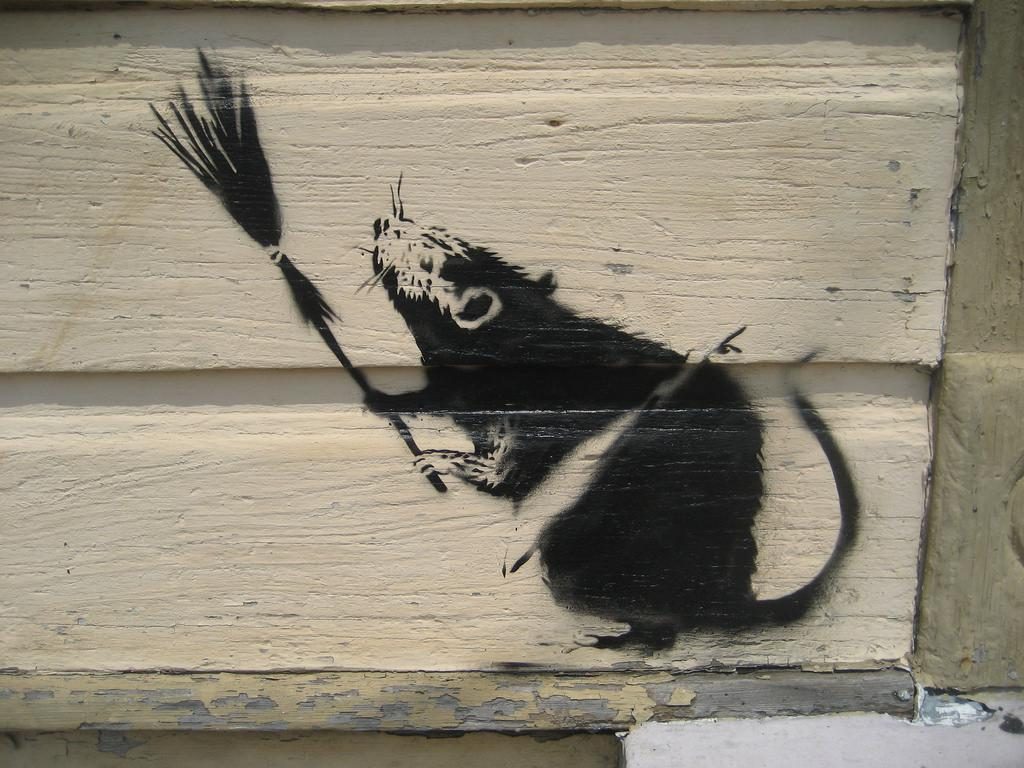 Since Banksy continues to keep his identity a secret, very little is known about Banksy’s youth. It is commonly believed that Banksy began his graffiti art lifestyle by admiring the artistry of Blek Le Rat, and even recycling his old ideas. Active in the graffiti scene since the early 1990s, Banksy initially hung around a graffiti crew in Bristol called the DryBreadZ crew, or DBZ. Soon after this, he began to partner with Inkie, another well-known graffiti artist.

At age 18, Banksy began to develop his signature stencil style after nearly being caught by police for vandalizing a public space. As his crew fled from the scene and Banksy himself was hiding beneath a garbage truck, he saw stenciled letters on the underside of the truck. This event led him to seek out a faster way to paint in order to fly under the radar of local law enforcement, which spawned his multi-layered stencil technique. Banksy also told his friend, author Tristan Manco, “As soon as I cut my first stencil I could feel the power there. I also like the political edge. All graffiti is low-level dissent, but stencils have an extra history. They’ve been used to start revolutions and to stop wars.”

Banksy has credited a few individuals as sources of inspiration for his artwork, including graffiti writer 3D from the British band, Massive Attack, and Blek Le Rat, who is known as the Father of Stencil Graffiti. 3D is one of the pioneers of graffiti writing in the UK, who brought free-hand, spray-can style graffiti to the UK from New York subways.

Blek, on the other hand, did not use the free-hand graffiti style commonly used by most graffiti writers, and instead utilized stencils to create images. Banksy has stated that he adopted the stencil technique out of necessity: “I was quite crap with a spray can, so I started cutting out stencils instead.” However, there is some controversy surrounding Banksy’s alleged copycat style of Blek Le Rat: though Blek was initially pleased to have inspired other artists, he has publicly challenged Banksy as a copycat. In his defense, Banksy has stated that every time he does something, he finds out after the fact that Blek had done it 20 years earlier. Banksy’s profound social impact, despite any recycling of others’ ideas, has been dubbed the “Banksy effect.” 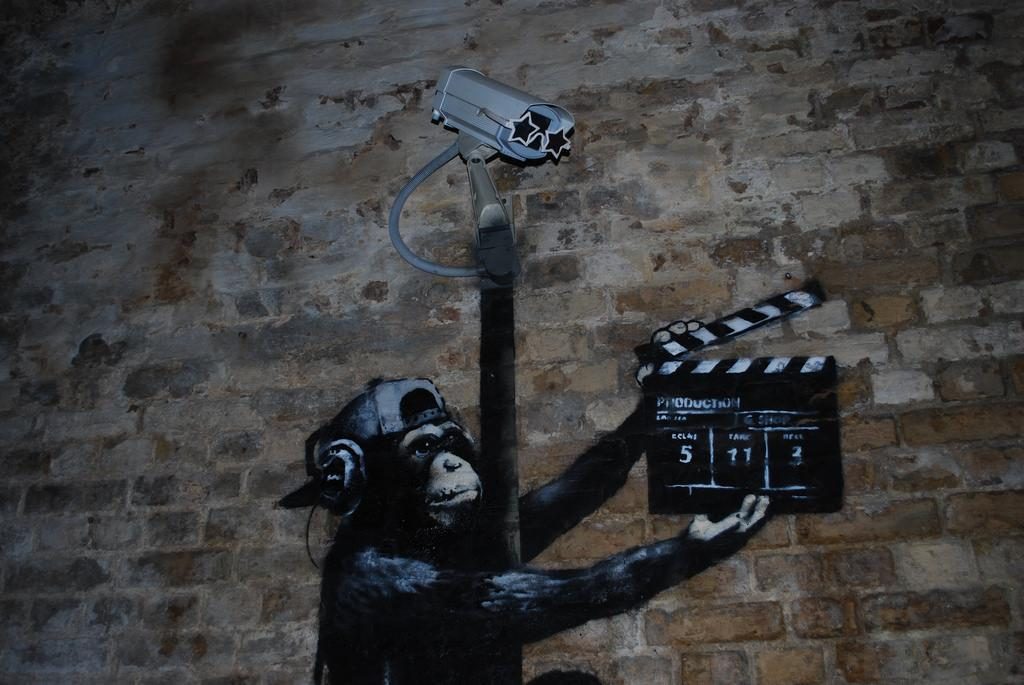 What is the “Banksy Effect”?

Though there are unmistakable similarities between Banksy and Blek’s artwork, Banksy has popularized graffiti as a socio-political message, impacting the world and paving the way for future street artists to change the way graffiti is viewed. Banksy’s worldwide fame has caused a transformation of thought surrounding the nature of artwork: though, initially, his graffiti was seen as an act of vandalism, his pieces are now considered highly sought-after works of art. Inspiring new creations from artists of varying talent, Banksy has become a commercial success. Journalist Max Foster referred to the rising prices of graffiti as street art, as the “Banksy effect.”

In 2010, Banksy released a documentary, “Exit Through the Gift Shop,” which premiered at the Sundance Film Festival, was nominated for an Academy Award and created more interest for Banksy and his artwork. Essentially, Banksy’s popularity and value as an activist-artist outweighs his criminality, creating a phenomenon that has transformed the way works of art, in general, are viewed. 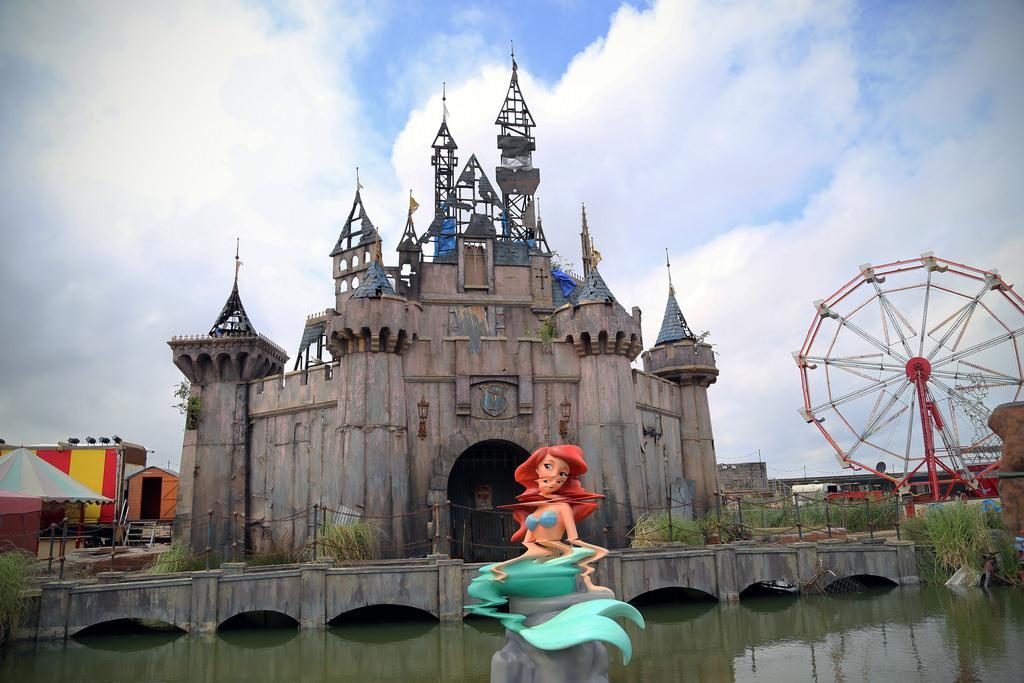 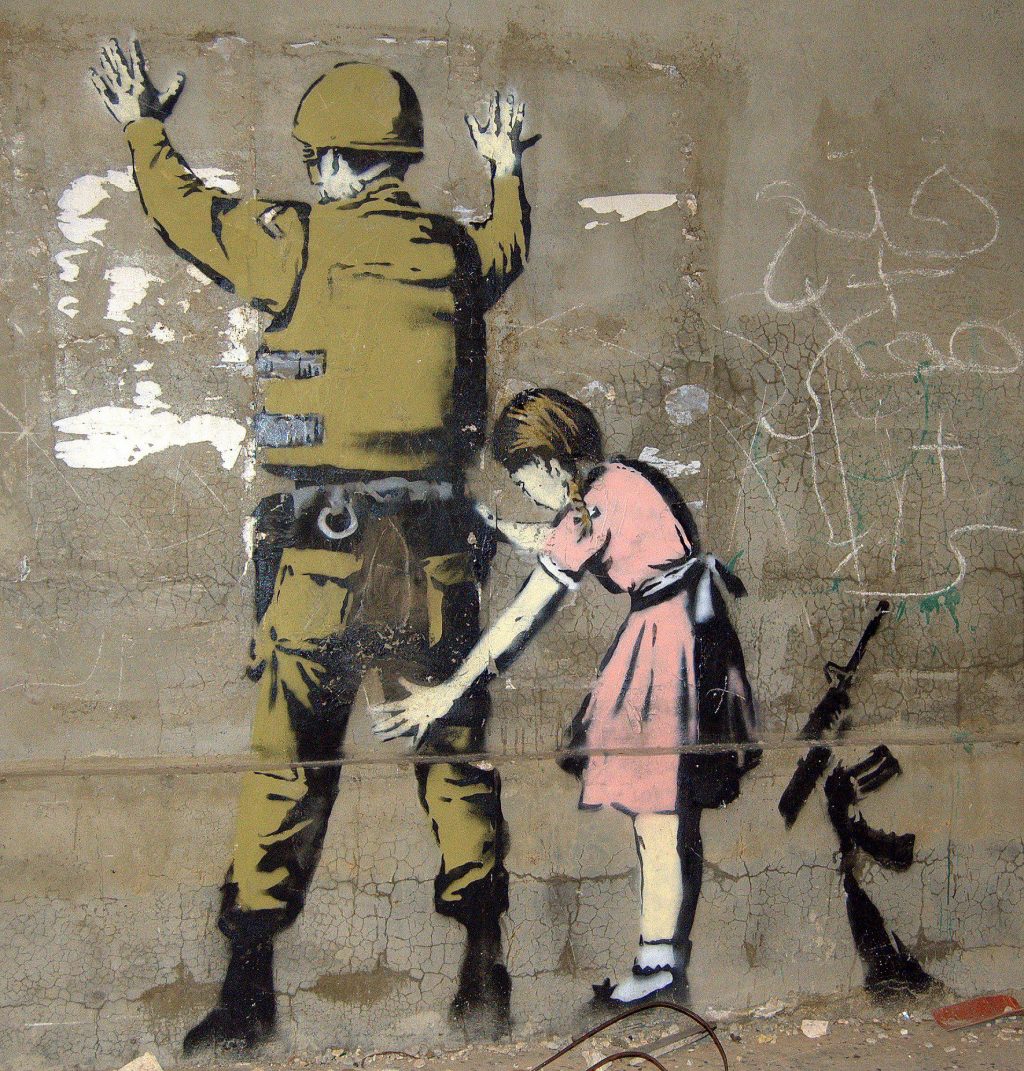 Banksy’s work and art is applauded by many, while others view it as a crime that is setting a negative precedent for other potential graffiti artists and artists in general. Representatives from Keep Britain Tidy are among some of the more notable critics of Banksy, believing his works are crimes and should not be tolerated. Because graffiti is illegal, Banksys’ works have raised questions in the social sphere regarding the line between art and crime: if Banksy’s work on the side of a building becomes a collectible and protected piece, while another, lesser-known graffiti artist is jailed for performing a similar action, what does this say about the hypocrisy afforded to fame? Additionally, wouldn’t this go against Banksy’s guerilla art philosophy?

Though city officials have the power to paint over Banksy’s works (or any graffiti) or allow them to stay, attention is brought to his art regardless: the destruction of Banksys’ works serves to popularize the political issue behind the piece as a point of discussion, ensuring his art lives on the event of its removal. Banksy’s subversive themes, guerilla approach to art and lack of any ego-driven need for recognition has contributed to his mainstream acceptance. The artist himself has become a bridge between the art world and the people, which had only tenuously been connected before. Public artist or criminal, Banksy has described himself as a “quality vandal” who challenges the authority of political and art institutions to contribute to positive change in the world.