How to Choose Funeral Flowers & What They Mean

No matter what the occasion, flowers have always played a very big part in the way people in society function when it comes to either happy or sad times. During the happy ones, they’re a way for people to tell each other that they’re loved. During the sad, people use flowers to add some beauty and comfort to the occasion, and maybe to represent hope for a better day and for well wishes.

Flowers are mainly associated with the happy parts, but they play a very important role in funerals as well. People use them to express their sympathies to the grieving family, and they use flowers to pay their respects to the deceased person as well. In different cultures all over the world, leaving flowers on a person’s grave is considered an act of love and respect.

But as with most traditions and less happy occasions involving flowers, funeral flowers can be tricky. You don’t want to be insensitive or give the wrong flowers or get the wrong arrangement for the casket, but at the same time, who doesn’t want beautiful floral arrangements adorning their loved one’s final resting place? In this article, we’re going to talk about choosing funeral flowers and the meaning behind some of them, so keep reading.

There are many reasons why people use sympathy flowers to convey their sorrow and support when the worst happens, but you can’t use a sympathy bouquet for the casket. While there are some specific flowers more likely to be used in sympathy bouquets, funeral flowers are usually chosen by someone close to the deceased, and the arrangement is made to respect and represent the deceased person’s wishes and personal tastes. 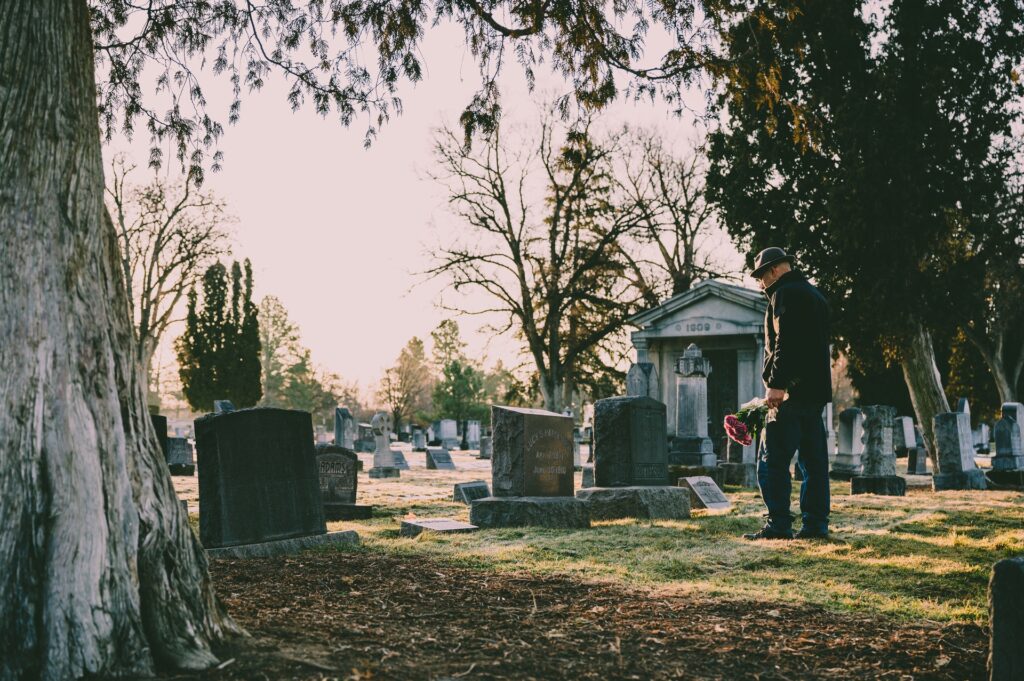 Wreaths are usually placed on the casket and come in many shapes like hearts, circles, and crosses. 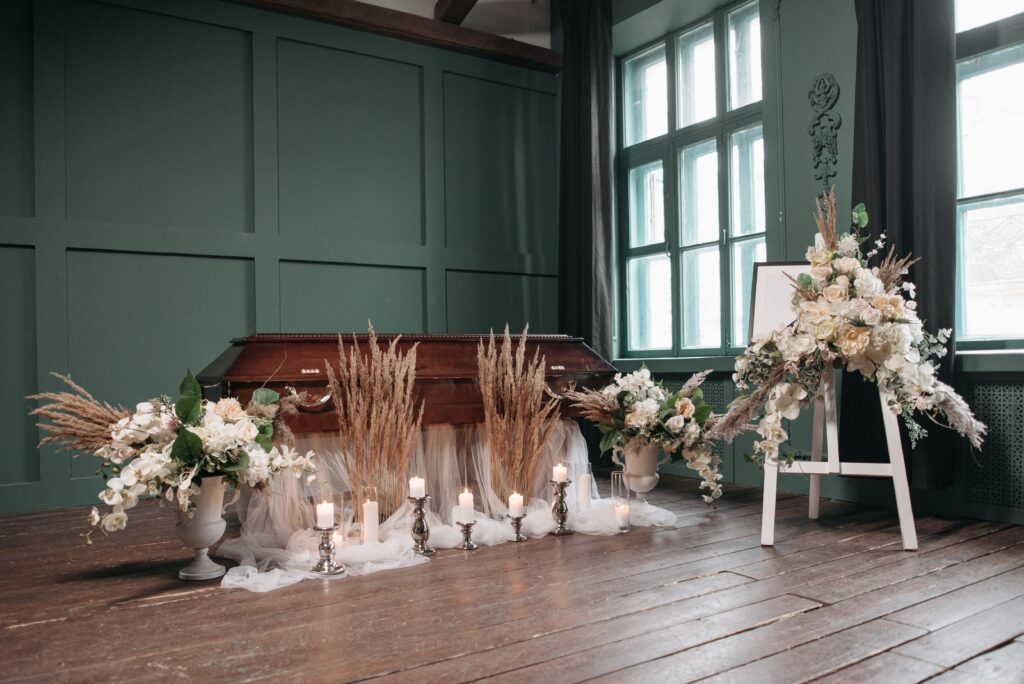 These sprays are placed over the casket and are arrangements of flowers made to look like they’re trailing down from the casket in artful bursts.

Bouquets are smaller and more compact, and while they’re not commonly used as funeral flower arrangements, they can be. This would involve placing a table next to the casket to display the arrangement in a container.

Flowers and Their Meanings

Most flowers used in funerals have specific meanings related to death and moving on to the afterlife. While these are usually the most popular, there are certain flowers and even symbols that have significant meanings in different cultures.

Lilies represent innocence in a lot of different contexts, but they represent the soul’s return to an innocent state when they’re used in any funeral related arrangements. They’re meant to represent the message that the deceased person’s soul is now at rest and in a better place, and come in a number of different colors from white to light pink.

Carnations come in white, red, and pink, but the most commonly used flower for funeral settings is white. White carnations represent untarnished love, meant to say that no matter what happens, the love between the deceased and their surviving friends and family will remain the same through time.

Mums are considered to be flowers only for grieving and funerals in a lot of Europe and North America, and that is what they symbolize. They’re common flowers for floral arrangements at funerals, but are also meant to symbolize truth in the US.

Gladioli are tall flowers that are used in sprays and other standing arrangements. They can also be used artfully in bouquets and wreaths, and represent the integrity, and strength of character the deceased possessed.

Roses have found their way into any occasion where flowers are used. In many parts of South Asia, they are the only flower used in funerals and happy occasions alike. This is usually because of how they can be found in a wide variety of colors which can suit any occasion.

White and light colored roses are popular choices, and we would suggest avoiding any brightly colored roses for this occasion unless specified otherwise by the family.

When to Bring Flowers

Funeral flowers are usually a good idea when you’re trying to express love and well wishes to the family in need of support right now. They’re a thoughtful gesture that can make a difference. This is why a lot of people end up sending sympathy flowers to the deceased person’s family even if they personally cannot make it to the funeral.

When to Not Bring Flowers

You should not bring flowers to a funeral when the deceased person’s family asked for donations to a certain charity or specified not bringing flowers for some other reason. They’re also not a good idea when funeral rites aren’t conducive to the exchange. Take South Asian funerals for instance – people attending the funeral are encouraged to bring food and to help feed the deceased person’s family and the people attending the funeral instead of bringing flowers.